Could Labour’s lost election open the way for eco-socialism? 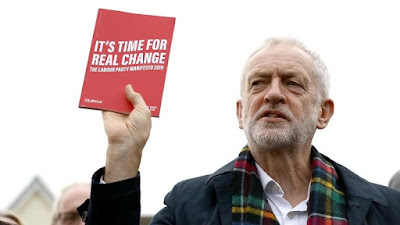 Forget Brexit, Corbyn and anti-Semitism, Labour lost the general election because it tried to look back rather than forward.

Media reports of Tory victories in former Labour heartlands included an almost wide-eyed amazement at the scale of the loss. But this should come as no surprise to anyone interested in politics, least of all political commentators and the Labour leadership, because the writing has been on the (red) wall for decades.

As long ago as the early 1990s, during development work for Red Pepper magazine, a number of left-wing academics and activists were attempting to warn about the erosion of Labour’s traditional support base in the trade union movement, former industrial towns and council estates by years of Thatcherite cuts and sell-offs and four general election defeats. In fact, one of the aims of Red Pepper magazine, when it launched in 1994 as an independent, radical voice for the left, was to explore and help develop new red-green politics both inside and beyond the Labour Party on the understanding that ‘one last heave’ was unlikely to bring the party back into power.

This new politics was not merely about policies, but about new, more inclusive ways of organising and embodying the vital connections between social and environmental justice. Red Pepper and its forerunner, Socialist newspaper, adopted the banner ‘Red, Green and Radical’ and opened its pages to writing by Greens (such as Penny Kemp), human rights and liberation group activists (such as Peter Tatchel), critical voices in the trade unions, plus lifestyle and cultural commentators. It advocated proportional representation as well as looking internationally at different models of green-left organisation.

Labour experienced a false reprieve through Tony Blair’s New Labour election victories, based on moving the party to the centre ground, winning over voters in key marginals and appealing to the more aspirant sections of Labour’s heartlands. But the malaise was merely in abeyance, as defeats by subsequent more traditional Labour leaders (Gordon Brown, Ed Milliband and Jeremy Corbyn) have shown.

Disappointingly, when Jeremy Corbyn became leader, rather than developing a new, collaborative, radical red-green politics, the party dusted off old, dearly held policies and went all out for ‘one last heave’. Political tribalism dominated, with a refusal to work with other parties nationally and no sign of living up to some Greens’ hopes that the widely respected Green MP Caroline Lucas would be invited to join Corbyn’s team as shadow Environment Secretary.

Corbyn’s Labour failed to grasp the threat and opportunity from climate emergency as a means of enabling the Party to develop an inspirational new means of tackling global capitalism and inequality. Instead they produced a growth-based manifesto with a bit of green-washing, such as planting trees. Even Labour’s Green New Deal was more about reassuring their union backers that there would be jobs for their members rather than genuinely re-gearing the economy.

The Party retains its centralised, hierarchical, command-and-control structure, apparently oblivious to the more open, horizontal organisation of successful radical European parties such as Denmark’s Alternativet or even Portugal’s Red-Green alliance.

While it’s completely understandable for Corbyn’s Labour to want to reclaim traditional socialist values, it was misguided to think enough of the electorate would understand them and hold them in sufficiently high esteem. Numerous studies show that societies tend to prefer a bright future than a worthy past, even if that bright future (in the case of Boris Johnson’s promises) is a con.

A case in point was Labour’s pledge to bring back state control of utilities and key industries, which was in direct conflict with the 1996 paper for Capital and Class by the socialist academics Huw Beynon, Ray Hudson and David Sadler. The study pointed to the ‘disastrous experiences of public ownership’ in Britain and argued that nationalisation had been a form of state capitalism rather than any critical overhaul ‘of the purpose of production or a communistic or socialist alternative to capitalist forms of organisation and life’. The authors’ research in the North of England revealed that state-run coal mining, steel production, railways and shipyards had wreaked more havoc on local communities than multinational corporations. Going by the election results in the North, many voters seem to agree.

Closer to home, the Green Party needs some of its own soul-searching. The Unite to Remain agreement with the LibDems and Plaid Cymru failed to realise either of the two extra seats the party was aiming for, while attracting criticism from some quarters for working with the austerity-supporting, unGreen LibDems and losing some long-standing members.

Although the 865,697 Green vote total was an improvement on 2017’s 512,327, it was still below the 2015 tally of 1,111,603, with many more lost deposits and fewer second places. There is substantial concern in the party over the decision to fight some marginal seats which contributed to Labour losses. And the Green Party has its own ‘one last heave’ in terms of relentlessly pursuing its ‘Target to Win’ local elections strategy, while ignoring the fact that it does not work everywhere and leaves scant resources to put into attracting new members or building local parties.

A Boris Johnson government is not going to introduce proportional representation and to seriously tackle climate emergency, and it remains to be seen how and whether the Labour Party will recover from this major setback, so the immediate future is bleak. However, if, as seems likely, the UK will leave the EU, there will be new areas where reds and greens need to collaborate, including on defending the environment, basic rights and consumer safety, and creating an optimistic narrative about the benefits of creating a low-carbon economy. That will entail learning lessons, not ignoring inconvenient truths and addressing the tribalism within and between all of our parties.

Postscript: Corbyn’s leadership prompted Red Pepper to ditch any pretense of its founding aims of nurturing broad radical politics and to declare its support for Labour. If Red Pepper is to avoid going down with the Corbyn ship, it’s a good time for it to revive its 1990s red-green vision in the context of the prevailing 2020s urgency.
Dee Searle was launch editor of Red Pepper (1994-95) and editor of Socialist (1991-93). She is a member of Camden Green party and a Green Left supporter