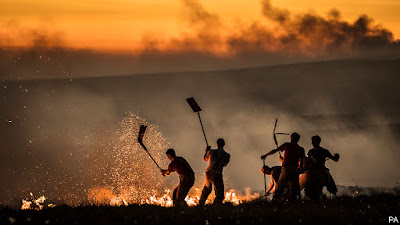 “It is time we consider the implications of it being too late to avert a global environmental catastrophe in the lifetimes of people alive today.” (Jem Bendell)
In other words, the world is coming to an end.
Of course it is… but when?

Professor Jem Bendell’s brilliant seminal work, “Deep Adaptation: A Map for Navigating Climate Tragedy” d/d July 27th 2018, claims the time is now, within a decade, not sometime in the distant future. Not only that, he suggests embracing this transcendental experience that’s colloquially known as “End Times.”

Along those lines, a powerful intimately conceived film by ScientistsWarningTV.org produced by Stuart Scott captures Bendell’s inner thoughts about “what’s important” in the face of near extinction: https://www.youtube.com/watch?v=6vwbanH9pgY&feature=youtu.be

Bendell’s 15-minute video monologue should be viewed in the context of the current status of the world’s climate crisis, which is a mindboggling steroid-enhanced-CO2-laced trip to nowhere but trouble, and it’s smack dab on target (actually ahead of target) for a grim, bleak world that alters all life and contorts the socio-economic compact, meaning sudden death for the “neoliberal brand” of capitalism, which will not survive once the world comes to accept and recognize its inherent villainy, notably its massive extensive disruption of the earth system of life, or Gaia.

Even worse yet, total annihilation of almost all life is a probability, a scenario that a small minority of scientists embrace. Those scientists believe that an extinction event is baked-in-the-cake, inevitable, inescapable within current lifetimes because of excessive human-caused greenhouse gases such as CO2, which, in turn, disrupts James Lovelock’s Gaia hypothesis, meaning the biosphere has a self-regulatory effect on Earth that sustains life.

Destroy one ecosystem and all others will fail in time and most of Earth becomes uninhabitable.

Decidedly, as well as factually, the planet has a long history of uninhabitable epochs known as extinction events (five times in the past), although the past occurrences were much slower than today’s zip zap exponential speedway to obliteration that literally takes one’s breath away! Never before has impending cataclysm been on such a rapid ascent as the 21st century.

On the other hand, who really believes it (“extinction”) will happen? Answer: Almost nobody believes it. As for the world at large, the “big it” isn’t remotely possible. All of which makes Bendell’s essay and monologue so intriguing and compelling as an alternative viewpoint. He embraces the “what if the worst-case scenario” really (surprise, surprise) happens?

Meantime, as things stand today, the world has come to its senses about the relentless severe dangers inherent within excessive CO2 emitted by power plants, cars, trucks, and planes. After all, greenhouse gases cumulate in the stratosphere, similar to layers of heavy woolen blankets, which, in turn, traps global heat which otherwise would escape into outer space, but no, it’s trapped.

But honestly, come on now! Are humans omnipotent enough to “control the climate” to +1.5-2.0C from baseline post-industrial without unintended blow-back and/or f/ups of major proportions? Is it really so simple? Answer: No.

Some knowledgeable sources claim it’ll be 10-20 years, or more, before technology is perfected and fully implemented to alter human-caused climate damage with any degree of proficiency, but that presumes an engineered concept sizeable enough in-scale to do the trick, which is the bane of on-going geoengineering efforts.

Already, the Paris 2015 climate accord is poignant proof that the world recognizes the dangers of abrupt climate change and a lot of very smart people are scared as hell! Still, the problem remains: Nobody seems to know what to do other than theorize, experiment and talk, which is notoriously cheap.

As it happens, nothing of major consequence is being done to stop an extinction event. As of today, fossil fuels emitting CO2 remain at 80-85% of energy consumption (Source: U.S. EIA, Washington, D.C.) the same as 50 years ago. Nothing positive has happened for decades!

Come to think of it, is it really too late?

Yes, according to Bendell, it is too late. He carefully reviewed the scientific literature as well as accessing research institutions to get to the bottom of the current status of climate change. What he discovered is basic to his conviction that society is headed for a train wreck of enormous proportions.

Deep Adaptation offers examples of likely outcomes, to wit: “With the power down, soon you wouldn’t have water coming out of your tap. You will depend upon your neighbours for food and some warmth. You will become malnourished. You won’t know whether to stay or go.

You will fear being violently killed before starving to death.”

Professor Bendell concludes: “Disruptive impacts from climate change are now inevitable. Geoengineering is likely to be ineffective or counter-productive. Therefore, the mainstream climate policy community now recognizes the need to work much more on adaptation to the effects of climate change… Societies will experience disruptions to their basic functioning within less than ten years due to climate stress. Such disruptions include increased levels of malnutrition, starvation, disease, civil conflict and war – and will not avoid affluent nations.”

It goes without saying Bendell’s contention may or may not play out accordingly. And in sharp contrast to his forlorn viewpoint, human ingenuity has been a powerful force over millennia and hopefully comes to the rescue. But then again, it’s human ingenuity that got into this mess in the first place.
Is it too late?

Ecosystems are already starting to crumble where no people live so nobody sees it.

Postscript:The Australian Bureau of Meteorology said mid -January 2019 marked the hottest days on record. Authorities are blaming the pounding heat wave for massive die-offs of bats on biblical scale and fish, as well as farms with “fruit still on the trees cooked from the inside out.” Ominous? Oh, Yes!

Posted by Mike Shaughnessy at 10:01