Our children on strike for the climate! What about us? What do we do? 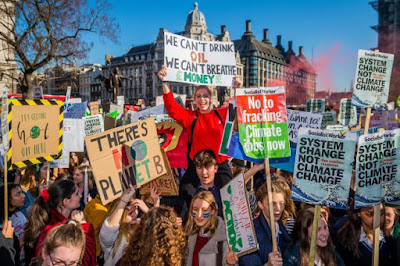 Written by Daniel Tanuro and first published at International Viewpoint

All over the world, thousands of young people are starting to set off spontaneously for the climate. On 17 January, in Brussels, more than 12,000 people went on strike and demonstrated in response to the magnificent appeal made at COP24 by the 15-year-old Swedish high school student Greta Thunberg. They were more than 35.000 one week later and the movement continues.

"What’s the point of going to school if tomorrow our world is destroyed," these young people ask. It’s common sense itself! These young people are not exaggerating. The situation is indeed very serious. The average global temperature has only increased by one degree since 1800, and the result is already worrying: heat waves, cold waves, more severe droughts, melting glaciers and ice caps, more violent cyclones, huge forest fires...

At two degrees, the impacts will be catastrophic. From that point we risk experiencing a snowball effect of global warming. The Earth would become a "drying planet", the temperature could rise very quickly by 4°C. Entire regions would become uninhabitable, hundreds of millions of people would become climate refugees, biodiversity would collapse and sea levels would eventually rise by three to four metres. It would no longer be a disaster, but a cataclysm!

The unavoidable conclusion is that everything must be done to ensure that the 1.5°C threshold for global warming decided at COP21 in Paris is not exceeded. But governments are not doing this. On the basis of their "climate plans", specialist's project a warming of between 2.7 and 3.7°C... At the very least, because more and more leaders are tempted to deny reality, like Donald Trump and the Brazilian fascist Bolsonaro!

In Europe, the Belgian government is one of the most hypocritical: on 2 December 2018, it congratulated the 75,000 demonstrators marching over climate, the next day it refused to support two European climate directives! Shame on those Tartufes! But the people are fed up with false promises and recuperation: there were even more demonstrators in Brussels on January 27.

Capital destroys our lives and the planet

Scientists have been ringing the bell for over 25 years. Why do emissions continue to increase? Why do governments do (almost) nothing? Because they are at the service of capitalism, because capitalism’s sole purpose is profit, because profit requires growth and because this growth is historically based on fossil fuel energy (oil, coal and natural gas).

Renewables? They are produced for profit, not for ecology. If we produced less and shared more, they would be enough to satisfy the real needs of humanity. But multinationals refuse to give up their fossil energy stocks and equipment, banks refuse to give up their capital invested in these stocks and equipment and bosses in all sectors have only one idea in mind: to exploit ever more labour and nature in order to produce ever more and make more profit than their competitors...

We are told that growth is the condition for everything: our jobs, our wages, our social security, our public services, our standard of living. Thus, our lives apparently depend on our exploitation and that of nature. In reality, this productivist system destroys both our lives and nature.

Today, we are on the brink of the abyss

Today, we are on the brink of collapse. To have a 50/50 chance of not exceeding 1.5°C of global warming, global net CO2 emissions must decrease by 58% between 2020 and 2030. Then they must be reduced to zero in 2050, after which it will be necessary to ensure that the Earth absorbs more CO2 than it emits.

Otherwise, it will be necessary either to resign ourselves to a planet that has become an used one, or to use technologies to artificially remove carbon from the atmosphere ("negative emission technologies") or to return part of the solar radiation to space ("geoengineering"). Warning: there is no guarantee that these witchcraft apprentice technologies will work. It will have to be experienced directly on a life-size scale, on the Earth and the living things that inhabit it....

Faced with a deadly danger, the instinct for self-preservation is a thousand times legitimate. The high school students are therefore a thousand times right to go on strike. Let us not stand idly by. Let us support them in the face of attacks from the pro-Trump right and attempts at recovery, wherever they come from. And let us follow their example!

The main victims of global warming are those who are constantly attacked by governments and employers: workers, peasants, children, women, pensioners, the sick... and migrants!

The rich tell themselves that they will always get by, even if it means living on artificial islands reserved for billionaires. To save their privileges and destroy our social and democratic achievements, they are increasingly tempted by the extreme right-wing who are racist, sexist and climate deniers. It is therefore clear that social and ecological issues are two sides of the same great democratic struggle.

This fight has only just begun. The world of work must take place there. From yellow vests to youth, it is high time to bring together struggles and demands. Today, our children are on the streets and on strike to defend their right to exist and that of their children on this planet. What about us adults? What do we do? We must be behind them! It is our duty and responsibility.

Let us mobilize, by all means. Let’s go on strike, too. Not a strike in slippers: an active strike. To discuss thoroughly all the injustices, all the destruction and ways to put an end to the current mess, both socially and environmentally.

For an ecosocialist emergency plan

Is it still possible to avoid climate disaster? The effort required is enormous. It can only succeed by combining the social and the ecological, in democracy and justice. An ecosocialist transition is essential. This requires an emergency plan. Here is a ten-point draft:

1. Eliminate unnecessary and dangerous production (starting with weapons!) and unnecessary transport of goods, locate production to the maximum, fight against programmed obsolescence.

2. Create public companies to insulate and renovate all buildings (at no extra cost to the inhabitants).

4. Leave fossil fuels in the ground. Expropriate and socialize the energy and finance sectors to organize a rapid transition to an economy based 100% on renewables (without nuclear!).

6. Respect climate justice. Transfer to the South the technologies and financial resources necessary for sustainable development for all.

7. Breaking with agribusiness. Promote ecological agriculture that does what it takes to sequester as much carbon as possible in the soil.

8. Share the necessary work among all, without loss of pay. Reconvert workers in the sectors to be eliminated (with income maintenance and social achievements) into new activities.

9. Getting out of the market: free education, transport, health care. Free consumption of water and electricity corresponding to basic needs, rapidly progressive pricing above this level.

10. Develop a culture of "caring", transparency and accountability. Strengthen and socialize care activities for people and ecosystems. Grant the right to vote to all. Recognise the rights of citizens and popular control and initiative, including the revocability of elected representatives

Utopian? Between 1940 and 1944, the United States government implemented an emergency plan. Military production has increased from 4% to 40% of GDP and all kinds of restrictions were imposed. What was done to defeat Nazism and ensure the global supremacy of US multinationals can be done to save the climate with social justice. It is a matter of political will. It is up to us to impose it.

Student protests in Albania: “What we are witnessing is the direct effect of the neoliberal reform in education”

In the wake of the yellow jackets, a major youth movement could develop in France

Amid Growing Clampdown on Dissent and Free Speech, Hong Kong’s Youth Is Pushing Back

A Lesson in How Not to Mitigate Climate Change

COP24: During the disaster, the comedy continues

Our planet, our lives, and life itself, are worth more than their profits!

Tropical Forests Are Flipping From Storing Carbon to Releasing It

Daniel Tanuro, a certified agriculturalist and eco-socialist environmentalist, writes for “La gauche”, (the monthly of the LCR-SAP, Belgian section of the Fourth International).

Daniel Tanuro is the author of The Impossibility of Green Capitallism, (Resistance Books, Merlin and IIRE) and Le moment Trump (Demopolis, 2018).

Posted by Mike Shaughnessy at 12:15