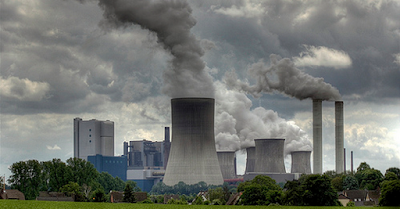 Capitalism not only owns global warming, there’s a big red mitigation arrow pointed at the heart of today’s rampant capitalism, which is eerily similar to the loosie goosie version of the Roaring Twenties, but with a high tech twist.

After all, somebody’s got to pony-up for climate change/global warming mitigation. Who better than deep pocket capitalists?

For historical perspective: Today’s brand of capitalism runs circles around the Eisenhower 1950s with its 90% top marginal tax rate amidst harmony and good feelings all across the land, an age of innocence aka Leave It To Beaver.

In sharp contrast to the fifties era of good feelings with its emergence of spanking new suburbia, today’s landscape resembles the film Blade Runner (1982) high-tech, rich, and gleaming in some places but elsewhere (often times right next door) shabby and weakening as America’s middle class fizzles away attached to a ball & chain of indebted servitude.

With increasing frequency as climate mitigation is investigated certain statistics stand out like a throbbing sore thumb: “The top three greenhouse gas emitters— China, the EU and the US—contribute more than half of total global emissions, while the bottom 100 countries only account for 3.5%. Collectively, the top 10 emitters account for nearly three-quarters (75%) of global emissions. The world can’t possibly successfully tackle the climate change challenge without significant action from these top-emitting countries.” (Source: World Resources Institute)

Interestingly enough, the socio-politico-economic genesis of global warming as of nowadays is known as Late Capitalism, as defined by Ernest Mandel (Late Capitalism, Verso Classics, 1999) or in the parlance: “Increasing commodification and industrialization of more, and more, sectors of human life” as the social fabric splits apart, delineating “haves” versus “have-nots.”

By definition, that socio/economic paradigm brings in its wake division, and fierce alienation.

So, Late Capitalism, what does it look like? According to Oxfam International, a confederation of 20 independent charitable orgs founded in 1942, sixty-two (62) of the richest billionaires held as much wealth in 2016 as 50% of the entire world population. That number dropped to 8 billionaires in 2017 controlling as much wealth as the bottom half of the world. That remarkable ratio is: 8 : 3,600,000,000.

The 2018 numbers are not yet available, but there’s speculation that the number eight (8) will drop, in time, to two (2) people that control as much wealth as one-half (½) of the world. That’s the absolute epitome, the zenith, of Late Capitalism.

It’s little wonder that wealth disparity, flashed all over the place, has become a target in the context of the climate crisis. In that regard, not many people grasp the issue as well as Kevin Anderson of Tyndall Centre for Climate Change Research/UK. Tyndall is one of the world’s most prestigious research institutions, and Anderson has a reputation for telling it like it is.

Recently, he spoke at the Oxford Climate Society.

Accordingly, as discussed by Kevin Anderson, knowing that climate change is a serious (existential) threat… what to do… just for starters: (1) The top 10% carbon polluters in the world must cut their CO2 footprint to the same footprint as members of the EU. (2) The remaining 90% of the world makes no reductions. (3) Ipso facto, global CO2 is cut by one-third.

That’s merely a starter, an appetizer for meeting the 2C temperature guardrail as agreed by the nations of the world at Paris 2015. Interestingly, the top 10% polluters are the heart and soul of effective mitigation, which is defined as an “equitable solution,” meaning those who emit the most carbon must carry the heaviest burden. Yet, an equitable solution has not happened, and there are no signals it will happen.

Getting to the heart of the matter, according to Anderson: “The taboo issue of the asymmetric distribution of wealth underpins the international community’s failure to seriously tackle climate change. Only when we acknowledge this can we move from incrementalism to system-change.”

Believe it or not (of course it is true and believable) 1,500 private jets flew attendees to Davos World Economic Forum to discuss, amongst other issues, climate change.
According to Kevin Anderson: “It’s about time we called these people out.”

For example, the Davos paradigm, meaning plutocrats taking control is legitimized (in Anderson’s words) by: “The climate Glitterati, such as, M. Bloomberg, L. DiCaprio, N. Stern, C. Figueres, A. Gore, M. Carney. All of these people have huge carbon footprints, and they fly around the world in private jets to inform us what to do about climate change. They are supported by a whole cadre of senior academics promoting offsetting, negative emissions, geo-engineering, CCS, green growth, etc. These are all ‘an evolution within the system.”

Well, surprise-surprise, not surprised, Royal Dutch Shell had a hand in shaping the Paris Agreement of 2015, and it influenced certain provisions of the “Rulebook” adopted at COP24 in Katowice 2018. This meddling clearly violates the ethics that only member states of the UN Framework Convention on Climate Change can determine “texts and rulebooks.” But, it happens with regularity.

At COP 24 in Katowice at a side event organized by the International Emissions Trading Association (a big time biz lobby) Shell’s chief climate adviser, David Hone, publicly announced that Shell should take some credit for inclusion of Article 6 in the Paris Agreement, which enables countries to trade emissions in carbon markets.

Not only, Mr. Hone also took a bow and credit for part of the text in the all-important “Rulebook” adopted at Katowice. By all accounts and according to various environmental groups, big corporations are “greenwashing.”

Fossil fuel companies were significant sponsors at COP24 in Katowice. Their logos were ubiquitous. And, at a mind-blowing out of this world event, the Polish Pavilion was stuffed full of actual lumps of black coal, as samplers.

Poland’s President Andrzej Duda told COP24 delegates: “Using coal is not in contradiction with climate protection in Poland because we can lower the emissions and ensure economic growth at the same time.”  What!!! Who falls for this kind of claptrap?

ExxonMobil pledged to cut its methane emissions and contribute funds for a carbon tax campaign in the U.S. Oh, please, stop it! Pseudo solutions like carbon markets and geo-engineering promises (that don’t work to scale) are pushed by corporate interests to legitimatize their current CO2 emissions. Oh please! It’s a ruse because if you lay claim to geo-engineering technology that fixes CO2 emissions, then you legitimize using as much fossil fuel as your little heart desires. But, the brutal truth is the technology is not perfected.

Not by a long shot. Then what?

Climate change is ultimately a rationing issue. But, so far, forget it: “We’ve had 28 years of abject failure on climate change. It’s not that we haven’t brought emissions down. It’s just that we’ve watched them go up. In fact, since 2000, the rate at which they’ve gone up is even faster than the 1990s.” (Anderson)

According to Anderson, the current CO2 global budget is roughly 700Gt of CO2 maximum to adhere to the Paris Agreement of temps below 2C. Meanwhile, 43Gt of CO2 is emitted per year, which equates to 16 years of current emissions to stay under 2C. Thereafter, and in fact, before then, CO2 emissions must drop to zero. (For the record, this has never happened.)

At the end of the day, the only conceivable way forward to prevent the world from turning into an oven is “system change” via transformation to decarbonized energy supply technologies with deep penetration of efficient technologies and a profound shift in behavior and reframing the value propositions re success and progress, an economic model that fits the purpose of mitigation, like eco economics.

As for the current economic model of high-end neoliberal capitalism, it must be displaced in favor of eco economics. What are the odds? One hundred percent (100%) it will happen but way too late!

According to Kevin Anderson, “Everything is pointed in the wrong direction… We are guaranteed defeat unless we start to think radically differently.” He concludes: “We have an outside chance of still meeting 2C if society addresses the political, social, and economic implications, as well as the technical ones.”

But, what if it’s too late?

Postscript: “Winning slowly is basically the same thing as losing outright. In the face of both triumphant denialism and predatory delay, trying to achieve climate action by doing the same things, the same old ways means defeat. It guarantees defeat.” (Alex Steffen – American award-winning futurist, 2017)
Posted by Mike Shaughnessy at 08:38