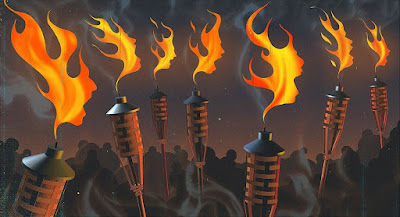 Written by Kai Bosworth and first published at Entitle Blog

Rather than (only) critiquing and dismissing existing uses of ‘the people’ as insufficient, political ecology could contribute to a new international populism capable of upholding climate justice.

Undoubtedly, something akin to ‘authoritarian populism’ is once again on the rise. This concept grew to prominence through the analysis of Stuart Hall and colleagues in the late 1970s and early 1980s as a diagnosis of the rise of Thatcherism and its hold on popular politics.

The term was frequently and heavily debated in the New Left Review throughout the decade, in part because it seemed to so accurately predict the rise of neoliberal style of economic governance. By ‘authoritarian populism’, Hall and his colleagues meant to point out something of a tension: that a form of ostensibly “democratic” politics could, in the very name of ‘the people’, result in the beckoning in of a strong and interventionist capitalist state.

In reflecting on the origins of the concept, Hall described authoritarian populism as a ‘deliberately contradictory term’. It demonstrated for him the eternal tension between coercion and consent in struggles for political hegemony.

But by 2018, the concept seems to have lost any such sense of internal dissonance. Populism is understood to be nearly synonymous with the political right, nativism, strongman politics, faux representation, Brexit, Donald Trump, xenophobia, and – consequently – anti-environmental politics.

Think, for example, of Trump’s use of the coal miner as a stand-in for the ‘everyday

American’, despite the fact that the ‘everyday American’ is far more likely to work at even a single fast food chain like Arby’s than in a coal mine. Such analogies effectively tap into the desires of how (some) Americans imagine themselves and their country, using the language of ‘the people’ to secure consent for transparently authoritarian policies.

Today, populism is leveraged by both liberals and much of the left as a self-evidently pejorative term to diagnose such a situation. For technocratic liberals, this is understandable: because populism shirks institutionalized expertise, democratic process, and the norms of elite decorum, it is loathsome at face value.

For the left, this is more curious. Populism increasingly seems to be taken at face value as leading to an authoritarian mode of doing politics. Not only does such a position ignore the historical usage of the term to describe largely leftist movements, but it plays into the liberal diagnosis of all mass politics (left or right) as undemocratic and regressive in nature.

I am not particularly interested in reversing the moralizing of populism as a political strategy, as someone like Chantal Mouffe seems to suggest in her short book For a Left Populism. Instead, I want to write against the easy use of populism as a sledgehammer or wrecking ball. Like Hall, I want to argue ‘against the satisfactions which sometimes flow from applying simplifying analytic schemes to complex events’.

I agree that populism is a crucial performative style of politics at our current moment. This is why I wish to expand and complicate its definition, by suggesting that it exists in several genres. By genre, I mean something akin to Lauren Berlant’s definition as a ‘loose affectively-invested zone of expectations about the narrative shape a situation will take’.

Thus political subjects emerge within ‘the feel’ of populist politics, which can lead nondeterministically to several different forms of doing politics. The feeling of resentment against establishment politicians, for example, need not be captured by the political right.

This leads me to suggest, first, while there are indeed authoritarian populisms, authoritarianism is neither the wellspring nor destination of all populisms. And, second, while there are anti-environmental populisms, at the same time, populist discourses and movements are increasingly emerging in articulation with various kinds of environmental and climate politics. They have different conceptualizations of ‘the people’ and ‘the enemy’, the state and sovereignty, and nature or the environment.

In two recent articles, I have tried to demonstrate the contradictions and potentialities that emerge when populism forms not as an anti-environmental movement, but from within environmentalism. In North America, at least, the People’s Climate Movement has become the coalescing framework for describing climate justice. I argue that this new formation, in part, is due to a style of left populism that rose to prominence in struggles against oil pipelines in the central United States.

There, a kind of progressive coalition politics – readily calling itself ‘populist’ – emerged through the formation of ‘unlikely alliances’ among white landowners, environmentalists, liberals, farmers, ranchers, and Native Nations, and was a primary reason that the Keystone XL pipeline in particular was delayed for the past decade. There is no point in moralizing the populist strategy undertaken by this movement: it both allowed for new alliances and new experimental modes of politics to emerge, while frequently resting on settler-colonial images of both history and the future.

The experience of studying the populist portion of the movement against the pipelines has led me to begin to broaden the scope of our understanding of environmental populism well beyond “the authoritarian.” In an article I am currently writing, I suggest that we might see at least five overlapping genres of populism: grassroots, left/socialist, reactionary or nationalist, anarchist, and Maoist. That’s right: even anarchist populism! The point, quite like Hall’s ‘authoritarian populism’, is to use a ‘deliberately contradictory term’ to expose the real potentialities emergent in contemporary climate politics. 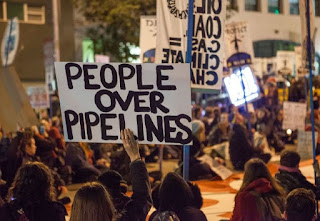 The politics of the people

While not always presented in terms of populist politics, accounts of everyday, democratic resistance of ‘the people’ are littered throughout the political ecology literature. Often times, it is this version of commoners, peasants, and underdogs who we attempt to side with. This orientation has been so common to the point that it garnered the infamously disparaging and dismissive ire of Vayda and Walters, who argued that political ecology has ‘a populist political agenda’.

And why shouldn’t it? Here we might have to think of a more specific orientation toward “the people,” one which begins to specify the content of that term. As Georg Lukács put it in his study of Lenin and the Russian revolution, ‘The vague and abstract concept of “the people” had to be rejected, but only so that a revolutionary, discriminating, concept of “the people” – the revolutionary alliance of the oppressed – could develop from a concrete understanding of the conditions of the proletarian revolution’.

Rather than (only) critiquing and dismissing existing uses of ‘the people’ as insufficient, retreating to our all-too-comfortable positions in esoteric groups with more comfortable names like the peasantry and proletariat, perhaps political ecologists could engage in such struggles over naming and representation at massified scales of the people. One would hope that such a practice could help create precisely the pathway Lukács describes, for developing a new international populism and a people as a subject capable of upholding climate justice against the reactionary, nationalist, fascist and – indeed – authoritarian populisms on the rise today.