Extinction Rebellion London – I was Arrested, but that’s Not going to Stop Me Protesting 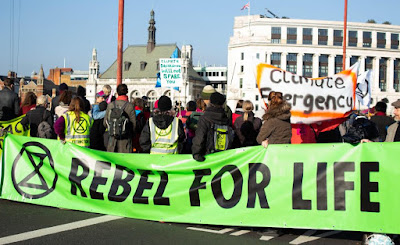 Following my involvement, on Saturday 17 November, in Extinction Rebellion’s very successful Rebellion Day 1 in London, friends have said I should feel proud of what I did.  ‘Yes’, I was one of over 6000 climate protectors who, peacefully, blocked 5 of London’s central bridges for most of that day - my allocated one was Lambeth Bridge: 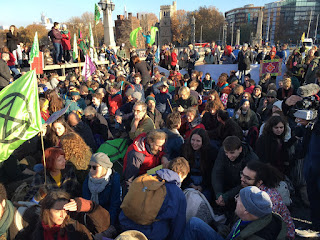 And, ‘Yes’, because of my actions, I was one of the 85 who were arrested for ‘willful obstruction of a highway’: 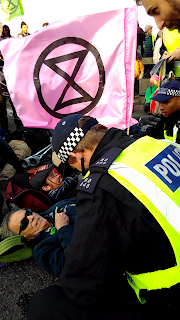 About to be arrested for refusing to move off the Bridge

After 2 hours in Barking and Dagenham police station, having initially been told I would be detained overnight, I was later ‘released, without bail, pending further investigations’.

From guilt to shame

However, I have to say that, of the 2 main feelings I’ve had about that Rebellion Day, ‘pride’ is most definitely NOT one of them. During the day itself, the main feeling was a combined one of exhilaration and hope.

Exhilaration, because so many people were prepared, peacefully, to break the law in order to protect the planet, and all those species currently living on it.  And hope, that this Extinction Rebellion movement will quickly grow into an overwhelming force which will succeed in at last pushing the UK government to protect its citizens by doing all that is needed to achieve a zero-carbon economy over the next 10-15 years.

But, travelling back to Cumbria on the Sunday afterwards - the last train to Penrith on the Saturday had left 30 minutes before I was released  from custody - an equally strong feeling began increasingly to take hold: guilt. Profound guilt. Though, as I’m now putting into the public domain, for the first time, the reasons why I feel so guilty, then that feeling now becomes one of shame - as my failings are no longer known only to me.

Essentially, I am deeply ashamed of how little - in just over 50 years of political activism - I have done to protect the planet and, consequently, our children’s and grandchildren’s generations.

Because for most of those 50 years - as well as the usual attractions and distractions - I was involved in campaigns that had nothing to do with the environment. Beginning with becoming a supporter of CND, I got successively involved in the campaigns against the Vietnam War and Apartheid South Africa; countering far right and fascist groups; as well as supporting the Bennite movement within the Labour Party.

Yet my first general political awareness was actually closely connected to the environment and how big corporations were despoiling it. In 1963, I read extracts from Rachel Carson’s Silent Spring:

This was at a time when her warnings were increasingly becoming visible - and invisible - in rural Norfolk, where I grew up. Visible, as regards the number of small birds which could be found dead by the sides of fields: invisible, by the gradual reduction in the numbers of owls and hawks.

Knowing, but not acknowledging

This failure was not because I had no knowledge of the growing environmental problems - or had lost my very early interest in wildlife. Various nuggets of information concerning the environment came to my attention, even whilst I was engaged with other, more overtly, political movements and campaigns.

However, for whatever reasons, the various but isolated facts concerning the emerging environmental crisis were largely pushed to the back of my mind. Even though, some 4 years ago, I’d read Elizabeth Kolbert’s The Sixth Extinction. 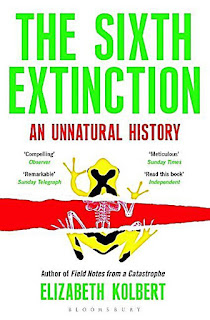 All this environmental ‘knowledge’ was like some increasingly disturbing background music that I just wasn’t properly engaging with. I knew various bits of ‘stuff’ about the environment but - crucially - just wasn’t acknowledging it.

As Stan Cohen pointed out in States of Denial, knowing how bad something is, is one thing; but, once you’ve acknowledged something is bad, then you have to make one of two choices. Either you say: ‘I know it’s bad, but I can’t/won’t do anything about it’ - and you ignore it and cross to the other side of the road. Or, you say ‘It is bad, and I must try to do something about it’.

Too little, too late?

It wasn’t until over 3 years ago that, as I was reading Naomi Klein’s This Changes Everything, I began to fully acknowledge the state we’re now in - and where, if we don’t take serious action soon, we’re heading. 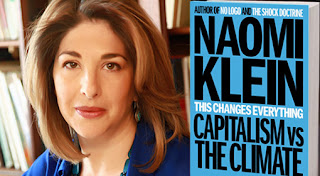 Because, as I read her book, I thought: “If only half of this is true, then - if we don’t act now - the world my grandchildren will inhabit will be truly awful.”

Thus it was mainly Naomi Klein’s book which prompted me, in 2016, to do nvda training with Greenpeace, in order to become an environmental activist. This summer, for instance, I was part of the Greenpeace actions against Barclays (over their funding of new tar sands pipelines in North America) and VW (over air pollution and their continued production of diesel vehicles).

Then, 2 years ago, I read Ian Angus’ Facing the Anthropocene - and thought: “Never mind our grandchildren, the planet is going to be really horrendous for our children - even though my generation will probably ok.” 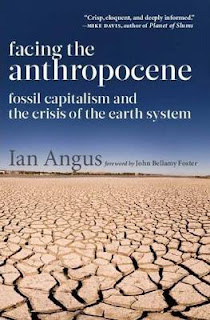 It was that which prompted me to become increasingly involved - eventually by organising the Green Mondays - in the anti-fracking campaign at Preston New Road, in Lancashire.

Now, of course, as this summer’s unprecedented global heatwave and, most recently of all, the catastrophic wildfires in California have shown, even my generation - which has done so much to cause, and so little to prevent this climate crisis - is also vulnerable to the increasingly frequent and destructive extreme ‘weather’ events resulting from global warming.

So, “No”, I don’t feel proud of my small part in Rebellion Day 1. Nor will I feel pride in anything else I may do in trying to prevent catastrophic Climate Breakdown. What I will feel, to my dying day, will be shame. Shame that I have failed our daughters and grandchildren, and their generations - and all the wildlife that currently still lives on this vulnerable planet.

However, I do try to follow Antonio Gramsci’s dictum: “Pessimism of the intellect, but optimism of the will.” Even though I increasingly fear we may have left it too late - and that the powerful dirty energy corporations will block the changes that are needed - there ARE definite signs of hope. The IPCC says we have 12 years in which to make the drastic changes that are necessary to get global warming to 1.5C or less.

Plus Kate Raworth’s brilliant book, Doughnut Economics - she has been one of our Green Monday speakers at Preston New Road - provides an intelligent and inspiring roadmap of what needs to be done: 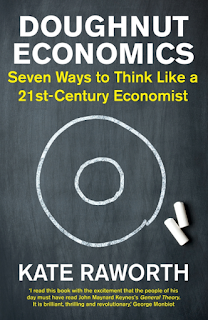 And, finally, Extinction Rebellion seems to be the organisation and movement that we need right now - and that could well be what finally pushes the UK’s government to act in the interests of the 99%.

As an Extinction Rebellion spokesperson has said:

“Peaceful civil disobedience has a long, proud and successful history in bringing about positive and necessary change - in the UK, and in other countries, such as India and the US.”