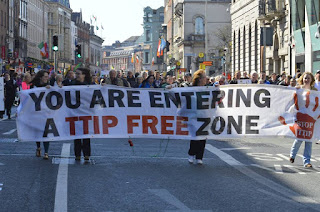 The trade union UNITE has commissioned a European law expert to examine the proposed transatlantic trade deal and his findings, for those with legal mind it can be read here.

According to Michael Bowsher QC, a former chair of the Bar Council’s EU law committee, the secretly negotiated agreement will:

Privatisation of elements of the NHS could become irreversible by future British governments.

Could allow private companies with links to NHS contracts to win higher levels of compensation through bypassing domestic courts.

Could force the NHS to contract out services it wants to keep in house or spin off them off as “mutuals.”

This is the clearest indication yet, that the TTIP deal has Britain’s NHS in its sights for privatising, where health corporations estimate they could make billions of pounds in profits from the health care sector in the UK. What else is left of the public realm in this country will also be vulnerable to the corporate vultures who, the deal is designed to benefit.

For over thirty years the steady march of privatising public services has seen a steady erosion of publicly owned services, as the capitalist system, with growth stagnating as it was in the early 1980s, increasingly seeking new areas of potential expansion.

Private corporations now infest our public services, but as always, the corporations want more. It is the nature of the beast, grow or die, and they have long desired to exploit the lucrative, previously largely off limits, NHS in the UK, to keep profits flowing.


Will we allow this?

38 Degrees have collected over 3 million signatures on its petition already. If you haven’t already, you can add your name here. You might also write to your MP to get them to oppose any NHS privatisation through TTIP.

Posted by Mike Shaughnessy at 11:06