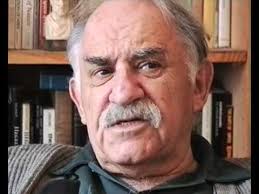 Murray Bookchin has become rather fashionable again recently in radical political circles, mainly due to his ideas being adopted by the Kurdish PKK leader, Abdullah Öcalan, who read Bookchin’s work whilst in a Turkish prison in the late 1990s. Can we count Bookchin as an Ecosocialist though?

Öcalan attempted in early 2004 to arrange a meeting with Bookchin through his lawyers, describing himself as Bookchin's "student" eager to adapt his thought to Middle Eastern society. Though Bookchin was too ill to accept the request, he sent back a message of support. When Bookchin died in 2006, the PKK hailed the American thinker as "one of the greatest social scientists of the 20th century", and vowed to put his theory into practice.

Which they did, in the area of northern Syria which they call Rojava in 2012, and they are still fighting to fully establish themselves there, in that war torn area. Traditionally, the PKK, were a Marxist/Leninist organisation, but reinvented themselves as anarcho-communists, following Bookchin’s ideas on the forms of real local democracy.

Bookchin himself was a former Marxist socialist, but became disillusioned mainly with the thinking of contemporary Marxists’ in the 1960s, especially in American academia. He set out much of his new thinking in pamphlets and essays, the best of which are brought together in his book, Post-Scarcity Anarchism, published in 1970. In the introduction to the second edition of the book he wrote ‘Socialism has become an industry and its literary works are commodities.’

Although Bookchin acknowledged Marx’s ‘rich’ contribution to the understanding of and the potential overthrow of the capitalist system, he thought it outdated. He set Marx in the context of his time, where material scarcity was the norm, but viewed from 1960s America (quite rightly) which had no scarcity, that this changed the environment in which revolutionary conditions might occur.

In Listen Marxist! a chapter in Post-Scarcity Anarchism he really lays into Marxist thinking, and accuses Marx directly of being an undemocratic centraliser with all that goes with it, notably a lack of liberty, no better and even sometimes worse than the bourgeois system socialists wanted to replace. He also is very critical of the Bolsheviks and their role in emascalating the soviets and factory committees, after the Russian revolution.

Ecosocialists are to some extent divided on whether Marx was an Ecosocialist or not, some seeing him as mainly a ‘productivist’. Indeed, Ecosocialism is probably closer to Anarchism than mainsteam twentieth century socialisms. Certainly Marx has a big influence on Ecosocialism, but that was true of Bookchin as well. Personally, I tend to agree with Bookchin, but I am agnostic on the matter anyway, I don’t think it matters much whether Marx was Green, for example. We take from him his thoughts on capitalism and socialism and use them for our age.

Bookchin called his ideas anarcho-communist or anarcho-syndicalist but he also coined a term which alluded to ecological matters, and so was the theory of Social Ecology formed. I think he still had an affection for socialism though, as he did state that the ‘social’ stood for socialist, but he didn’t want to confuse this with the contemporary Marxist socialism of the time. From this perspective, Socialist Ecology is in many ways the same thing as Ecosocialism, a term that had not been used by the time Bookchin was formulating his thoughts.

Like Marx, Bookchin’s work now looks dated. I think scarcity will be back quite soon, as natural resources deplete and climate change makes land scarce and drinking water in all probability too. I don't share his faith in technology to save us, either. But I do take his point, the world has moved on from the nineteenth century when Marx was developing his ideas for a post capitalist socialist world.

Joel Kovel, a very important figure in the emergence of Ecosocialism, studied Bookchin’s work and concluded that Social Ecology is much the same thing as Ecosocialism. Particularly around the idea of not having nation states, with all the evidence we have had of socialist states in practice, which generally seem to stifle true freedom and democracy. Ecosocialist’s want democracy from the bottom up, not the top down, and horizontal power structures, just like Bookchin advocated.


So, I think we can say that Murray Bookchin was an important figure in the tradition of Ecosocialism, and in the end it is only a matter of terminology. Whether he counts as an Ecosocialist, I don't know, but I certainly like to think that he does.

Posted by Mike Shaughnessy at 11:56