2015 was a Record Year for Protests 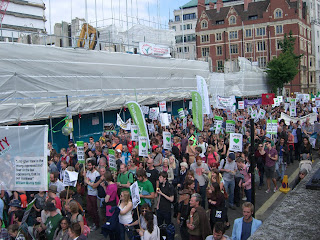 An interesting piece written by David J Bailey over at The Conversation informs us that last year was a record year for protesting. His data shows that in 2011 protests peaked, the year of the Arab Spring, Occupy, UK Uncut, urban riots and anti-austerity and tuition fee protests, but 2015 did surpass 2011. After a fall in protests over the next two years, they then rose sharply from 2013 to a new peak in 2015.


Bailey has calculated the number of protests in the UK from 1980. The graph below shows the trends up until 2015. Protests fell back in the 1980s and 1990s, before steadying in the naughties with a rise in 2003 due, I will assume, to the Iraq war and the huge demonstrations that were provoked by the Labour government’s ill-judged military adventure in that unfortunate country. Protests then fell back again, until the financial crisis in 2008, from where they have sharply risen, after a fall back in 2010. 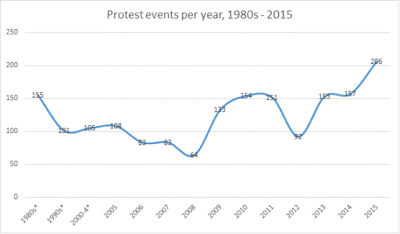 The participants of protests has changed over this period, and it is like a visual history of the country and how content we, the political activists, have been with our lot over the last thirty five years. The chart below details this changing of the groups of people involved in protests over the period.

It is noticeable, and comes as no great surprise really, that in 1980, workers (union members) were by far the biggest protest group. Margaret Thatcher's neo-liberal Tory party was in power, and workers were under constant attack from the government. At this time over 13 million people were members of trade unions, which has fallen dramatically to about 6 million members today, mainly confined to the public sector, or former public sector.

Workers accounted for 70% of protests in 1980 but only 20% in 2015. In 2015 environmentalists, housing activists, students, pro-minority groups (including those supporting refugees and asylum seekers) and anti-cuts activists groups, contributed 40% of protests (up from less than 10% in 1980).

Not only does this reflect the decline in union membership and tough anti-strike laws introduced over the last thirty five years, but also the nature of protests and protesters. Climate change chief amongst them, environmental concerns are growing, where they were a minority cause in 1980, but there does seem to be more inclination for other groups to demonstrate, such as housing activists, and for them to organise and campaign, on a wide range of issues.

2015 saw environmentalists, housing activists and ant-austerity groups drawing together, in the joint climate, housing and anti-austerity demonstration organised with the People’s Assembly over the summer. There appears to be a realisation that together we are stronger, rather than just pursuing separate, single issue campaigns and that these issues are profoundly linked to our political and economic system. Their struggle is our struggle, kind of solidarity, across class lines in many cases.

It is also illuminating to look at what people were actually protesting about. The graphic below gives an illustration of these issues. 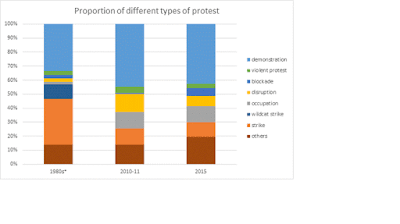 We can see that strikes account for far less protests in 2015 as compared with 1980. Demonstrations have increased, although it is interesting to note that they fell a little after 2011, but the biggest increase between 1980 and 2015 is in 'disruption' and 'other'.

These actions were in the form of direct action, occupations or stunts performed by protesters, like Vivienne Westwood driving a tank to the Prime Minister’s home.

Some of the biggest demonstrations of 2015 continued to focus on the government’s austerity measures, including the 100,000 attendees at the People’s Assembly Against Austerity in June and 50,000 people protesting outside the Conservative Party Conference in October. September also saw 30,000 demonstrators calling for the government to do more to help refugees, and in November 50,000 environmentalists demonstrated in support of stronger government action to be agreed at the Paris summit.

It looks likely that these trends will continue, as there is plenty to protest about with our nasty Tory government set on destroying what is left of our welfare state. Will there come a point when a critical mass is reached, and these protests explode into a potentially revolutionary force? The future is hard to read, but when we look back at things like the May 1968 French protests, nobody really saw that coming at the time, but it became a very powerful social movement.

Who knows, it might only take one spark, to ignite the whole situation. History also teaches us, that things never stay the same forever.

Posted by Mike Shaughnessy at 10:14