A survey was conducted by academics at Queen Mary University London and Sussex University (in association with YouGov) just after the General Election last year, seems to show that the voters in Britain think the Green Party is most left wing major party in the UK. The voters who identified themselves as strong supporters of Conservative, Labour, Lid Dem, SNP, UKIP and the Greens were surveyed and their findings are published at the LSE website.

The people surveyed were asked to rate the party they supported and the other party as Left or Right wing, on a scale where 0 is very left wing and 10 is very right wing. The results are illustrated above. If you look along the line horizontally, say of Green supporters, you can see that they rate the Greens as quite left wing (2.30), a full point ahead of Labour and more than two points more than the Lib Dems.

There is a rider here, this poll was conducted before Jeremy Corbyn became leader of the Labour party, so I would think that Labour would score more left wing now, although that is not apparent from the behaviour of Labour MPs so far. Interestingly, supporters Labour rated themselves as more left wing than the party, which does indicate that Corbyn was pushing at an open door in trying to move Labour left. Green supporters rated themselves slightly to the right of the Greens.

They surveyors rated the parties as well, and I don't know what criteria they used but it does seem to be fairly accurate (the last row of scores), although I'm unsure how they came to rate Labour as slightly to the left of the Greens? 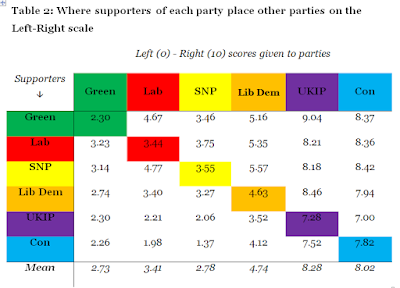 The second table shows how supporters of these parties rated the other parties on the left/right scale. You can see that Labour supporters rated the Greens as more left wing than Labour (slightly), as did most supporters of the other parties, with the odd exception like the Tory and UKIP supporters rating Labour as more left than the Greens (and the SNP even more so), but this may be out of habit with Labour. The SNP were put about about in the Tory press dangerous left wingers which may have influenced their rating by Tories). In general though, from left to right, it runs Greens, Labour, SNP, Lib Dem, UKIP, and Conservative, on the left/right scale.

It does look from these results, and remember these are strong supporters of the parties and so no doubt quite politically engaged, more so than floating voters say, that voters in the UK are more left wing than has been suggested, certainly the mainstream media.

It we take the Tory rating, by its supporters, of 7.8 as the far right wing end of the scale, then the famous 'middle ground' would be a rating of 3.9, which the SNP (3.55) comes closest to. The Lib Dems are regarded, by their own supporters, as more to the right.

It could be that the public is more left wing than thought, and it may just come down to having an effective leader, like Nicola Sturgeon of the SNP to put across left policies, rather than any great reluctance on UK to support left policies and parties.