Why we Greens Must Stick by our Anti-austerity Red Lines 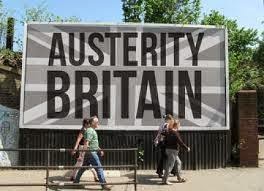 Let’s be quite frank – austerity is a massive con. The financial crisis of 2008 has been used by the Coalition government to force through deep cuts to our public services, in the name of ‘balancing the books’. With help from a compliant mainstream media, the narrative has been established in political discourse that somehow we are to blame for allowing Labour to bankrupt the public finances. The wisdom of age is that government spending must be cut back so we can ‘live within our means’ and this goes virtually unchallenged, it is an established political fact.
And it goes unchallenged by Labour, probably because deep down they believe it to be true, and are fearful of making their financial credibility even worse in the popular imagination. No matter that the Tories and Lib Dems when in opposition both stated publicly that they would match Labour pound for pound on public spending, that was then, this is now.
Of course, Labour was complicit in overstretching the public finances with their Private Finance Initiatives and Public Private Partnerships which are incredibly good for corporations and incredibly bad for the public purse. Many NHS Trusts are in financial difficulties at present because of the exorbitant costs of these schemes, likened by some to buying a house on a credit card.
But more than this, Labour’s economic policies are to blame. Wages have been falling since 2003 and the only way that growth can be maintained in such circumstances is for credit to increase. This was manufactured by creating (or allowing) a housing bubble to develop, which as prices rise, allows homeowners to borrow against value of their homes and so raise spending, driving growth in the wider economy. Astonishingly, the Coalition, are attempting exactly the same trick now, having seemingly learnt nothing from the biggest recession that most people can remember.
This is not only unsustainable, but even in the Coalition’s own terms is failing to pay off the national debt as promised. It would probably be even worse had Chancellor Osborne not changed tack a bit in 2012 and more or less adopted Labour’s fiscal approach as set out by Alistair Darling at the 2010 general election. Not to worry though, the whole scam has achieved its primary objective, that is, the corporations and wealthy individuals have continued to get richer whilst the rest of us have got poorer.
Austerity is bound to be a key election issue, with the Coalition saying that Labour would once again bankrupt the country and put all the hard work (by us) at risk of being undone. The ‘job is only half done,’ more of the same is needed. Labour will argue that the government’s strategy has been a failure in removing the deficit and only their slower cuts will do the job. Labour doesn’t appear to have learnt any lessons from the recession either, because they want to carry on as normal, just like the coalition, with no other plan for growth other than raising private (our) debt.
The Green party is the only one of the larger parties to oppose austerity outright. This is a distinctive position for the party and naturally marks out a clear ‘green line’ between us and the rest. Crucially, we want to raise the minimum wage to the living wage, to create sustainable growth. The party’s recent spring conference voted for austerity to be a ‘red line’ in any negotiations with Labour post election. So, we campaign strongly on this issue at the general election, and let the voters decide. 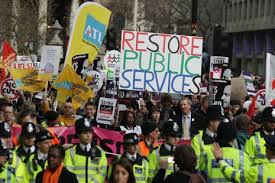 There is a growing resistance to austerity economics right across Europe, and although some of these countries have suffered much more than the UK (Greece and Spain for example), we also have evidence of a fight back closer to home. The Scottish independence referendum last year blew the lid off the cosy austerity consensus amongst the big parties and their friends in the media. Even though the referendum was lost, that has been far from the end of the argument. The SNP are soaring in the polls on an anti-austerity agenda and may well end up as part of a governing arrangement with Labour. If the Greens can win a handful of seats, we too could be part of this arrangement.
But this is where it all gets difficult. Think about this scenario for a moment. Labour is short of an outright majority after the May election, but with the SNP and Greens (and Plaid Cymru) has enough MPs, even on a policy by policy basis, to form a government. They refuse to alter their budget plans but perhaps make some other concessions. If we don’t accept there will be a continuation of the Tory/Lib Dem coalition.
Will our MPs want to risk taking the blame for another 5 years of the Tories, perhaps including UKIP and the DUP in government too, when they could have kicked the Tories out?
Difficult though this would be, we must be brave, and if necessary allow the Tories in again. But at the same time we need to mobilise the party at large, and the general public where we can find support, and the trade unions. If we can build up enough public pressure on Labour, they can be forced to buckle, or take the blame themselves for another Tory government.
These are high stakes indeed, and a calculated risk, but any other course of action will throw away all the gains and momentum we have built up over the last year or so.
So I say this to our prospective MPs. Don’t make the same mistake as the Lib Dems. We are behind you, do not budge one inch on austerity, expose the con, there is another way. We will reap our reward electorally next time around, which could well be only months away if a minority government is formed. The chances of two general elections this year is high, let’s play a (slightly) longer game.
Posted by Mike Shaughnessy at 11:20