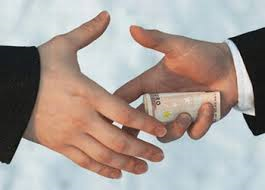 Here is the evidence:

The word “corruption” evolved from an old expression of rottenness, as of rotting fruit or flesh. It has extended its meaning to a lack of ethics, and has acquired a more specific meaning of the abuse of political power for personal gain, in the sense of "bribery and corruption".

"Westminster" covers both the House of Commons and the House of Lords, and the Civil Service, the whole place right through to the Remembrancer, the representative of the City of London who can whisper in the Speaker's ear.

At the outset we should remember that the will of the people is the sovereign power in Britain, and MPs and Lords are given office in order to serve the best interests of the people. That is their job. It should occupy all of their working hours. They should be adequately rewarded for the hard work that they do, but they should not seek to gain any other money by any other means, except outside of their working hours, when everything that should be done to help their constituents has been done.

So - is Westminster - the seat of power of the British state - pervasively corrupt? Is there an unusual lack of integrity, of ethical behaviour expected of responsible servants of the people?

This piece presents evidence from known corruption scandals, ongoing lobbying, political donations, directorships – and last but not least, the scandal of child sex abuse by VIPs, and it concludes that Westminster is indeed corrupt.

Looking at the history of the last quarter century, we find 15 instances where actions that may reasonably be characterised as being rotten practices, in the sense of being inconsistent with sound ethical standards, have been revealed. This averages at about one revelation every 18 months. Here they are:

All of the above is evidence, in a range of clarity, that suggests that a culture of corruption, dodgy dealing, sleaze and amorality prevails in the Palace of Westminster.

Bear in mind that these are events which came to the light of day. It is reasonable to suppose that not every shady deal is discovered.

What is striking is that MPs do not learn from their mistakes, in that there are at least 6 stings in the list, but MPs continue to be caught out by undercover journalists. As Adam Ramsey, a green commentator said, “Like a toddler caught with their hand in the cookie jar, they just cannot see what the issue is”. This suggests that what we are recording here is merely the tip of the iceberg.

The second noteworthy point is that on six occasions, the judiciary and other regulating authorities exonerated the perpetrators, and in one case, even awarded them damages.

Over and above these 15 cases of overt corruption, there are four other modes in which the democratic process is overridden in Westminster: Lobbying, political donations, directorships and the protection of VIP child abusers.


We need to remind ourselves that in a democracy, the role of Parliament is supposed to be to represent the will and interests of the ordinary people of Britain, who are the ultimate source of political power and authority. If MPs and Peers are using their office to make deals that benefit themselves personally. This is a perversion of democracy. It is corrupt in the second, more specific sense of the word.

There is a culture of lobbying in Westminster where MPs and peers are entertained and fed at great expense by corporate lobbyists. They are listening not to the concerns of their constituents, but to the blandishments of highly paid professional persuaders working on behalf of big corporations, whose only duty is to maximise the profits of their shareholders.

There is also a “revolving door” that allows MPs and Ministers to take jobs with corporations, and corporations to embed their employees in Government offices. The nuclear industry is especially involved in this process.

The Coalition Government has produced the Lobbying Act which enshrines the idea of self-regulation of lobbyists This shows only that they have learned absolutely nothing from the MP expenses scandal, where self-regulation failed so catastrophically.

The Alliance for Lobbying Transparency rejects the Lobbying Act as a sham. They call for

A genuine lobbying register, as adopted by the US, Canada and other countries, would cover the whole of the lobbying industry and allow us to scrutinise:


• who is lobbying whom


• what they are seeking to influence


• and how much they are spending trying to do it.

Support for this Bill must be a priority in the campaign to make Parliament fit for its original purpose of serving democracy.


On top of lobbying, there is the matter of donations to political parties. In an effort to control the size of these donations, those over £5000 to a national political party, or £2000 to a local party, must be declared. We have seen how party fund raisers have repeatedly tried to circumvent this legislation by turning to loans.

The major parties are in hock to major donors, receiving millions from private individuals, corporations and in the case of the Labour party, from the unions.

It is naive to accept the protestations from donors and parties that there is no connection between donation and policy. They would say that, wouldn't they?

Clearly, in a democracy, it should be illegal for a party to take money in donations above a very strict limit, and the law should be applied with rigour. In that political parties are a necessary part of the democratic process, they should be modestly and reasonably out of taxation,

Several reviews and reports have been issued in an attempt to bring some kind of order to party funding.

Hayden Phillips' report proposed a £50K cap on donations, and an increase of party funding from the state.

The 2011 Committee on Standards in Public Life proposed a cap of £10K/donor/party/year, with more than that from Trades Unions if they accept an opt-in, a 15% reduction on allowable campaign spending, and public funding of £3 per Westminster vote, and £1.50 for other elections. They also suggested income tax relief for parties.

Therefore reform is on the way, but moving with glacial slowness, held up by an emotional reaction from tabloid newspaper editors. The idea that parties should be funded by the taxpayer calls forth derision, based on their disgust at the behaviour of MPs. What these tabloids need to grasp is that the corrupt behaviour of MPs is a result of the very system of private payments that they, the tabloids, are defending.


Here is a list of 10 Coalition Cabinet Ministers who have commercial interests in healthcare corporations. This is was during the time that the NHS is obliged to put its services out to private tender.

This is unacceptable. Not only is it wrong that Ministers should take on directorships that will take their attention away from governing the country, but also it is wrong that they should have an interest in companies who stand to benefit from their political decisions. In that these directorships and consultancies are a source of income, the MPs are using their office for personal gain.

We have found extensive evidence from 15 historic financial scandals, and from the way that Westminster is run through lobbying, political donations and directorships, that the system is corrupt, and that democracy is not well served.

But there is more. 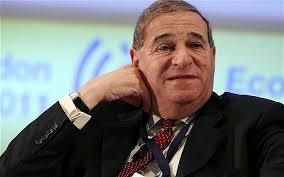 
If corruption is the abuse of office for personal gain, then it is clear that some office holders use their position to satisfy their sexual urges. There are no less than 60 (sixty) instances where investigations of sexual abuse of children were blocked as soon as they began to get close to VIPs. 23 Politicians have questions to answer. 6 civil servants are under suspicion or are known beyond doubt to have abused children.

Given this evidence, it is reasonable to believe that the Establishment has a great deal to hide in the matter of child abuse by its own members. It does not want its crimes to be discovered.

David Cameron claimed that he would leave “no stone unturned” in his search for answers to child abuse, yet the Home Office made not one, but two wrong choices of a chair for the Inquiry into Child abuse. The choices were said in the press to be faulty because they were Establishment figures, but the central criticism brought by the survivors was that the two figures chosen to lead the Inquiry were close to two VIPs suspected of being complicit in abuse.

The first choice,Butler-Sloss, was sister to Robert Michael Havers. The second choice, Fiona Woolf, was friends with Sir Leon Brittan.

It is vital that the Establishment figures involved in child abuse must be brought to justice. Quite apart from the pain caused, and the fact that murder is implicated in some cases. to have abusers at the heart of Government is not acceptable. First, VIPs who take part in child sex lay themselves open to blackmail. Second, VIP child sexual abuse creates a criminal underworld at the heart of the State. This works against democratic values, because if decision makers are hiding secrets in one area, this will work against transparency in other areas.

Two simple policy changes are needed to discover who is trying to protect child abusers in high places. First, retired police officers need to be released from their obligations under the Official Secrets Act, so that they can tell investigating officers what they know. Second, the direction of investigations needs to be directed upwards, as in "Who ordered you to stop this investigation? Who was your superior?" These policy changes are developed here.

A Plague on All Your Houses?


A clear pattern is emerging. The common view that sceptics take of politicians, "They're all in it for themselves", is not that far off the truth. There are some decent MPs, and we should not dismiss the whole Parliamentary system by thinking that it is 100% corrupt. Parliament does not need to be destroyed and replaced by some unspecified other thing, it needs to be reformed.

Labour, Tories and LibDems all have a poor record when it comes to the kind of corruption we are taking about here. Ukip are not in a position to claim that they are clean.

The Green Party is relatively untarnished by the corruption in Westminster, if only because it has had no presence in Westminster, apart from Caroline Lucas, who has a reputation for integrity. Green MEPs, London Assembly members, and councillors have acquitted themselves well, although one early councillor was forced to resign on child pornography charges.

In view of this, the Green Party is not in a position to take the moral high ground, but rather to work with honest politicians of every party to bring about policy changes that will put paid to the endemic corruption that infects Westminster.

The best way forward might well be to declare an amnesty. a six month period during which people can come forward and confess any corrupt acts that they may have committed. They should then make reparations proportionate and appropriate to their actions


These issues must be brought to centre stage in this 2015 General Election campaign.