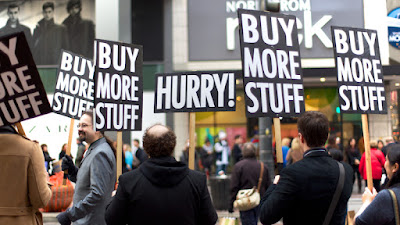 Our Actions Do Not Exist In a Vacuum

Between every blink of an eye, a hundred Amazon packages are shipped in a constant, ever growing barrage of internet consumerism. The past 20 years have been dominated by Amazon’s unwavering growth and revolution of the world’s shopping scene in never before seen ways. Their success thrives off capitalism's incessant gluttony for infinite growth, exploiting our biological hardwiring (by abusing our dopamine triggers to create a literal addiction to shopping) to draw dollar after dollar from our pockets.  Capitalism’s reliance on continuous growth (to power the cycle of surplus to reinvestment) creates a need for constantly increasing consumption, even when the basic needs of a society are already met.

As a result, modern ad campaigns aim to convert wants into needs by directly associating fulfillment with material goods (like a man finding love after wearing a certain cologne or a loving family exchanging gifts as a sign of affection) and solidifying this culture of consumption. Nowadays, companies don’t just sell you a product. By marketing certain aesthetics in fashion, music, lifestyles, advertising sells you an identity. Instead of saying what you could have with this product, it’s what you can be with that product. It’s gotten to a point where just watching people buy stuff has become a market in itself. Shouldn’t that alone raise some alarms?

What most consumers fail to realize, however, is the environmental price tag of their consumption habits. While it’s true that the individual carbon footprint was created to distract the public from the fact that 70% of greenhouse emissions are caused by just 100 companies, this isn’t to say consumers can shrug off all responsibility. The money spent on a Shein haul (a popular website where consumers can buy a variety of items, primarily clothing, for dirt cheap) still directly supports their unethical business practices and the larger system of fast fashion.

Ultimately, these industries survive on the wallets of consumers who dump their dollars into their unsustainable consumption habits. It’s a tricky relationship. Take fast fashion, for example. Recent years have shown an absurd increase in textile consumption and more importantly, textile waste. The U.S.’s textile waste has quintupled since 1980 despite the population only having increased 40%. To make it worse, current data shows over 80% of American clothing consumption ends up in landfills, which produce methane, toxic runoffs, and take up land.

Fast fashion is just one industry, too. In even worse business practices, like overfishing, 40% of sea creatures caught aren’t even loaded off the boat, they’re just thrown back into the ocean after they’ve already died. After discarding 38 million tonnes of dead sea creatures a year, the industry then goes on to dump record-breaking levels of plastic into the ocean. Reckless, wasteful practices like these are what lead to the collapses of entire ecosystems at rates never before seen. Waste statistics like these—40%, 60%, 80%—should be a clear sign that we are producing far more than we could possibly need, and the environment and global proletariat are paying the price.

What’s capitalism’s proposed solution to these problems? More consumption (but this time it's “green”)! The rise of greenwashing, a new marketing trend where products are advertised as more sustainable than they actually are, is a perfect example of capitalism proposing itself as a solution to the problems it created. Preying on consumers’ environmental concerns, companies advertise their products as more environmentally friendly in order to increase sales, despite their new production practices having similar environmental impacts as before. They tell us they can do this whole capitalism thing sustainably, we just have to give them enough time that we don’t have.

Though they continue to promise green capitalism through endless, dangerous pledges of net-zero emissions by 20XX, the current state of things has shown that we don’t have time to pray for capitalism to solve the problem. Some propose divorcing carbon emissions from economic growth often known as “decoupling,” which focuses on breaking the link between economic growth and environmental degradation through recycling, pollution standards, and “green” investment. While these policies may be beneficial, any attempt at decoupling is just putting a bandage on a bullet hole. In fact, decoupling attempts often make things worse, such as in South Korea’s 2009 green growth initiative that tried to revitalize the economy while reducing carbon emissions.

While the plan did stimulate the economy, it also spiked emissions, completely defeating the initial purpose. Needless to say, we are beyond the days of experimenting new ways to make capitalism work for us. It’s time we take steps to move beyond the system that destroys the environment in search of another dollar.

Those next steps are nothing other than the process of degrowth. The days are over of Amazon reaching record breaking profits by perpetuating mass, environmentally destructive consumerism while neglecting worker’s needs and wages. Degrowth may sound intimidating, especially since we are conditioned as a society to a capitalist idea of progress. Isn’t growth what we should strive for? No. It’s clear that the positive growth of the modern economy is directly related to growth of global carbon emissions and barely linked to the average citizen’s wellbeing (caveat: economic prosperity barely touches the working class, but recessions decimate them. Funny how that works, huh?).

In fact, the only years in the past two decades we have noticeably reduced global carbon emissions has been during economic recessions, such as the 2008 financial crisis. That should tell you something. If we want to seriously reduce our global emissions, we have to be willing to prioritize it over economic profits. The only way we can do that without collapsing our entire society is if we deconstruct the capitalist framework focused on eternal growth of private profits and allow for a system that prioritizes social and ecological sustainability: ecosocialism.

First, however, let’s talk more about degrowth itself. Ultimately, degrowth serves as an antithesis to the capitalist system that pursues infinite growth in spite of its ecological and social consequences. It calls for a descaling of production and consumption, enabling societies to live within their ecological means as determined by strong efforts in research and organization as opposed to private interests. Rather than organize societies efforts towards material accumulation and deal with the repercussions later, degrowth focuses on addressing real needs like resource equity.

As a society, we prioritize turning resources into profits and waste. Degrowth aims to change that, focusing on the deprivatization of industry and reprioritizing necessary work over excessive work meant to derive a profit. It also aims to fix the fundamental issues with privatized resources, such as scarcity and upcharging. Oftentimes, communal resources are privatized and resold to the community with incredible upcharges. When these resources are essential to life, such as water or medicine, these upcharges can ruin—or even end—lives. However, this is amazing for business. Why? GDP is a measure of costs, not benefits. In our current economic structure, however, we can’t just not have growth.

Without growth, our economy would collapse, and the consequences of capitalist recessions always fall on the working class and the marginalized. Degrowth proposes a new economic structure. Rather than prioritize private profits, degrowth embraces local ownership of resources, often managed by a well researched agenda based on equitable distribution of resources. Not only that, but by prioritizing local needs over profits, only as much work as is needed to sustain society would be necessary, theoretically freeing much more time for the average worker.

Degrowth is not just a Western solution. Scholars are very aware of the global disparity in resources, and believe that by reducing consumption levels across Northern countries, we can improve material conditions in poorer countries. In fact, a new study models that by 2050, a global population of 10 billion could live comfortably at the consumption levels of the 1960s. That means citizens living in currently impoverished countries around the world who barely have enough to eat right now could live in the well-being of a post-WWII Europe.

However, the cost is there. Citizens of the Global North would have to accomodate to no more second homes, no more red meat 7 nights a week, and a generally resource-conscious lifestyle. However, the key is this would require the adamant rollout of new technologies in a planned, non-profit driven method. We cannot fall back into the trap of infinite growth, infinite consumption, and definite collapse. We need an economy where we no longer strive for material excess, but rather on the simple needs of ourselves and our neighbors. It would require a restructuring of the entire global system of resource allocation. If we can get used to living within our means, it can happen.

Hope for the future

Ultimately, degrowth does not mean returning to the Middle Ages. It does, however, mean a drastic reduction in the Global North’s resource consumption and a restructuring of our entire economic system. It means a planned, equitable economic overhaul of the world’s wealthiest nations and a constant check on our resource consumption as a whole. Degrowth means prioritizing environmental and social well-being over profits by producing and consuming less — permanently. However, life within this system would still be comfortable. Wealthy countries could slash their energy consumption by over 90% and still provide a comfortable living to all their citizens.

In fact, it may be more fulfilling because work would revolve around social needs, not alienated profits. Rather than working to keep up with demand, we would only have to work to upkeep a low-consumption society. Even gruelling resource collection jobs, like coal-miners and field workers, would be drastically reduced due to lower demand, and those workers would be properly compensated for their labor rather than have it stripped of them and sent to the top.

Degrowth creates an economy based on mutual care, not material goods for fulfillment. However, it is crucial to remember degrowth cannot exist within capitalism. Without continuous growth, capitalism fails. If we tried, it would only resemble austerity measures (removing money from the economy, the consequences of which often fall on the working class). Now more than ever, we are faced with the dire evisceration of our planet's natural ecology as well as the boundless exploitation of our rights as workers.

Degrowth is only a pillar of ecosocialism, a greater system that aims to protect environmental and popular welfare beyond the capitalist agenda. In order to install this system, it must bubble up through democratic means, first by reclaiming control of the government and economy by the public. Now more than ever we are faced with the impending evisceration of our natural ecology as well as the boundless exploitation of our bodies and natural resources.

However, not all hope is lost. As a species, it is still well within our means to crawl out of this hole we’ve dug for ourselves and create a better world for those who come after us. Any moments of hesitation will be looked back upon with tremendous remorse as future generations ask why we didn’t do something while we had the chance. It’s for them that we organize, restructure, and free ourselves from the endless pursuit of profit.

Posted by Mike Shaughnessy at 06:27