Beyond the Capitalist Paradigm of Destruction: Generative Chaos 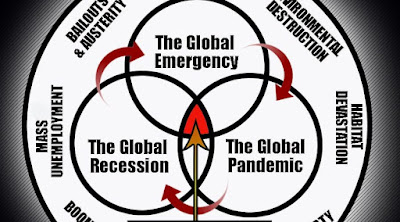 Written by Leonardo Boff and first published at Internationalist 360

I believe that this leap, with our participation, especially the victims of the exploitation of capitalism, can occur and would be within the possibilities of the history of the universe and the Earth: from the current destructive chaos, we can move on to generative chaos of a new way of being and inhabiting planet Earth.

The Iron Cage of Capital

The unexpected may occur, within the quantum perspective assumed by the new cosmology: the current suffering due to the systemic crisis will not be in vain; it is accumulating benign energies that will make a leap to another, higher-order.

We are still in 2021, a year that did not end because Covid-19 canceled the counting of time by continuing its lethal work. 2022 could not, for now, be inaugurated. The fact is that the virus has brought all powers, especially the militaristic ones, to their knees, as their arsenal of death has become totally ineffective.

However, the genius of capitalism, regarding the pandemic, has caused the transnationalized capitalist class to restructure itself through the Great Reset, expanding the new digital economy through the integration of the giants: Microsoft, Facebook, Apple, Amazon, Google, Zoom, and others with the military-industrial-security complex.

Such an event represents the formation of immense power, the like of which has never been seen before. Let us note that this is an economic power of a capitalist nature and that it, therefore, realizes its essential purpose, that of maximizing profits in an unlimited way, exploiting, without consideration, human beings and nature. Accumulation is not a means to a good life but an end in itself, that is to say, accumulation for accumulation’s sake, which is irrational.

The consequence of this radicalization of capitalism confirms what a sociologist from the University of California at Santa Barbara, William I. Robinson, in a recent article, has well observed (ALAI 20/12/2021): “In the aftermath of the pandemic, there will be more inequality, conflict, militarism, and authoritarianism as social upheaval and civil strife escalate. The ruling groups will turn to expanding the global police state to contain mass discontent from below”. In effect, artificial intelligence with its billions upon billions of algorithms will be used to control each person and the entire society.

Where will this brutal power take humanity?

Knowing the inexorable logic of the capitalist system, Max Weber, one of those who best analyzed it critically, shortly before his death, asserted: “What awaits us is not the blooming of autumn, but a polar, icy, dark and arduous night (Le Savant et le Politique, Paris 1990, p. 194). He coined a strong expression that strikes at the heart of capitalism: it is an “iron cage” (Stahlartes Gehäuse) that cannot be broken and, therefore, can lead us to a great catastrophe (cf. the pertinent analysis of M. Löwy, La jaula de hierro: Max Weber y el marxismo weberiana, México 2017). This opinion is shared by great names such as Thomas Mann, Oswald Spengler, Ferdinand Tönnies, Eric Hobsbawm, among others.

Various world-society models are being discussed for the post-pandemic. The most important ones, besides the Great Reset of the billionaires, are: green capitalism, ecosocialism, the Andean buen vivir and convivir, biocivilization, of various groups and Pope Francis, among others.  It is not up to me here to detail such projects, which I have done in the book Covid-19: A Mãe Terra contra-ataca a Humanidade (Vozes 2020).

I would only say: either we change the paradigm of production, consumption, coexistence, and especially the relationship with nature, with respect and care, feeling part of it and not over it as owners and lords, or else Max Weber’s prognosis will come true: we may from 2030 to at most 2050, experience an ecological-social Armageddon extremely harmful to life and to the Earth. In this sense, my feeling of the world tells me that the one who will destroy the order of capital, with its economy, politics, and culture, would not be any mill or school of critical thinking. It would be the Earth itself, a limited planet that can no longer support a project of unlimited growth.

The visible climate change, an object of discussion and decision making (practically none) of the last UN COPs, the increasing depletion of natural goods and services, fundamental for life (The Earth Overshoot), and the threat of breaking the main nine boundaries of development that cannot be broken at the price of the collapse of civilization, are some indicators of an imminent tragedy.

A significant number of climate experts say that we are too late. With the already accumulated greenhouse gases, we will not be able to contain the catastrophe, only, with science and technology, to lessen its disastrous effects. But the great irreversible crisis will come. That is why they have become skeptics and even techno-fatalists.

Are we resigned pessimists or, in Nietzsche’s sense, supporters of “heroic resignation”? I think, as a pre-Socratic said: we should expect the unexpected because if we don’t expect it when it comes, we will not perceive it. The unexpected may occur, within the quantum perspective assumed by the new cosmology: the current suffering due to the systemic crisis will not be in vain; it is accumulating benign energies that, upon reaching a certain level of complexity and accumulation, will make a leap to another, higher-order with a new horizon of hope for life and for the living planet, Gaia, Mother Earth. Paulo Freire coined the expression to hope: not to keep hoping that one day the situation will improve, but to create the conditions for hope not to be empty, but to make it effective through our efforts.

I believe that this leap, with our participation, especially the victims of the exploitation of capitalism, can occur and would be within the possibilities of the history of the universe and the Earth: from the current destructive chaos, we can move on to generative chaos of a new way of being and inhabiting planet Earth.

This is what I believe and hope for, reinforced by the word of Revelation that states: “God created all things out of love because He is the passionate lover of life” (Wisdom 11,26). We will still live under the benevolent light of the sun.

Posted by Mike Shaughnessy at 07:05