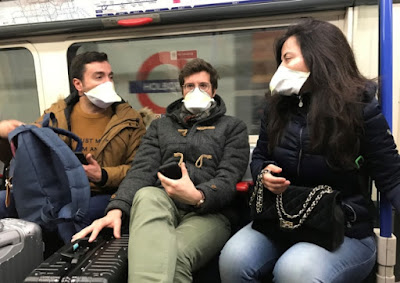 The UK government has announced its latest advice for the public follow, to slow down the rate of coronavirus infection. Now, people should avoid social contact, like in restaurants, cinemas, pubs and the like, and for all those able to work from home, should do so.

It is hoped that these actions will delay the rate of infection, and so spread the burden on the NHS into the summer, when it is less stretched. There is also evidence that the coronavirus can't survive outside of the body, at temperatures above 27C%. Hopefully a hot summer will do a lot of the work of killing off the virus.

All of this is very sensible, but it has to be said that these measures should have been taken earlier, as has been suggested by many medical experts, both in the UK and around the world. The move became inevitable once civil society, sporting authorities, employers, religious services and with even the Green party cancelling their spring conference, made these decisions themselves.

This has only a small impact on these organisations (especially large sporting clubs), but the move to discourage attendance in pubs, restaurants etc will have a big impact on these businesses. The government has not ordered this action, which means that insurance claims from businesses cannot be paid, leaving many to go bankrupt.

Transport for London said on Monday, that passengers on the London Underground were down 20% and 10% on buses, which is explained by many workers working from home, with the blessings of their employers.

The rush hour London Underground is a perfect vehicle for incubating and spreading infections, and indeed the virus appears to be ahead of the rest of the country in London. Who would have thought it?

Well, plenty of Londoners, I can tell you. The idea that you put a two meter distance between passengers is risible. If large gatherings of people are to be avoided, then the Underground is an obvious area for reducing infections. This appears to have been totally ignored by the government.

Many are questioning why schools are still open, when many other countries have closed them. Yes, key workers with children, like those employed in the NHS will need to have some creche type facilities provided, but with other workers working at home, they can easily take care of their children. Workers who cannot work from home, will also need protections, whether that is masks or whatever is effective. How can schools stay open when everywhere else is closed? It makes no sense.

It looks as though some kind of travel ban to the UK will need to be introduced, as many other countries have already announced. On present form it will be announced by the British government sometime next week, as we are lagging behind events, confirmed by Monday's announced measures.

All benefit regimes should be relaxed and provision needs to be made for homeless people, as well other vulnerable groups. The social care system, already under strain because of ten years of austerity (with still no proposals for long term funding), needs a significant increase in funding, urgently.

Last week saw supermarkets run out of stock, although why people need so much toilet paper for an infection that does not affect the digestive system, one can only wonder. But the vacuum left by the government, was filled by panic buying, which tends to happen with emergencies like this.

The assertion by the UK government that these new measures are only now needed, really doesn't wash. Other governments around the world have already taken these actions, and some with lower infection rates than the UK, and seem to have contained the spread of the virus, better than we have. The UK authorities have even stopped testing many people, so how can they really know the true number of people with the virus?

There has been a complete abdication of responsibility by the UK government, choosing instead a kind of laissez faire approach, in an attempt to build 'herd immunity,' basically do nothing and keep your fingers crossed. This has not been good enough by a long chalk. The first duty of any government is to protect its citizens, and the UK government has failed to do this, whether by incompetence or design, it doesn't really matter.

These are serious times, when we need a serious government, but unfortunately in the UK we do not have one, led by a prime minister who is a clown. The only mitigating factor is the UK government has handled this better than the US government, whose president's first reaction was to call it fake news then to blame it on foreigners. Thank heavens for small mercies.

Posted by Mike Shaughnessy at 15:32