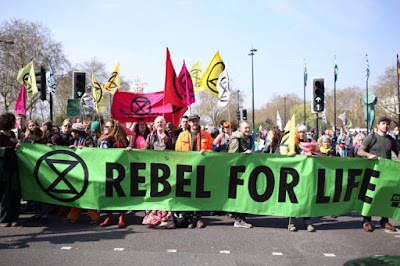 The worldwide protests organised by Extinction Rebellion, have put the issue of the ecological crisis into mainstream political discourse. Non-violent actions have been carried out in more than 30 countries and within them, many more towns and cities. But it has been in the UK, the birthplace of the movement, that has seen the most spectacular actions, particularly in London. Four central London locations were held, and blockaded, three of them illegally, for almost a week, with over a 1,000 arrests being made by police.


It has astonished me that protesters held on for so long in London, but I had obviously misjudged the numbers that Extinction Rebellion could mobilise, especially those willing to be arrested in the process. The Metropolitan Police, have, by and large, handled the demonstrations well, and proportionately, as far as I can tell. I’ve been out of London for a few days, and only managed to visit the Parliament Square camp, on the second day of that encampment, and all was very quiet whilst I was there.

The right-wing media has attempted to smear the protesters all week, but the best they came up with was to call them ‘middle-class.’ Since when did the Daily Mail see being middle-class as an insult? The accusation was that working-class people had more to worry about, low wages, insecure jobs and public services cut to the bone, which may well have some truth in it, but when was the last time the Daily Mail etc championed the causes of these people? Never, is the answer.

There are other movements that have sprung up recently to try to force action on the ecological crisis, such as the school students strike and Earth Strike, both also international in their scope. The catalyst for all of this activity seems to have been last year’s International Panel on Climate Change report, which warned that we only had twelve years to get our act together on carbon emissions or face runaway climate change. People have observed the almost complete lack of urgency on the part of governments’, and concluded that they must be dragged kicking and screaming into action.

Protests were confined to only the legal gathering at Marble Arch in London by Easter Monday, and Extinction Rebellion has said they will democratically decide what comes next. Judging by what we have seen in the last week, whatever is decided will be imaginative and well supported. Protests will continue throughout the summer, of that I think we can be certain.

What made this rebellion brilliant was that it demonstrated that if you have the numbers, especially the huge numbers willing to get arrested, the authorities cannot cope. With police numbers cut back over the last decade, they found it impossible to take back these occupied sites, and have storage space for those taken into custody. Many of those arrested returned to the protests when they were released after a few hours, some of whom were arrested again. 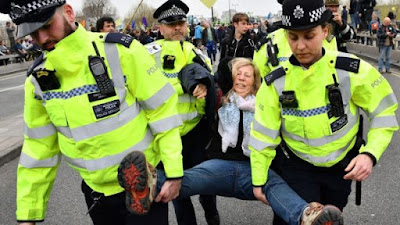 Extinction Rebellion appeared to have a misinformation plan in place too. There were rumours of the London underground network being targeted for disruption, diverting police resources, but in the end only a three person protest took place where protesters glued themselves to an overland train. Similarly, Extinction Rebellion announced an intention to close Heathrow Airport, resulting police being drafted in from Wales to defend the airport, only for about a dozen protesters to stand on a roundabout, causing no disruption at all.

I was interested to note the language used on Extinction Rebellion’s twitter releases, words like ‘held’ an area, and ‘retaken’ an area, as well as calling the protesters ‘rebels’. It was all good natured, but the language reveals something of thinking of the organisers, I think.

There will surely come a point, when most of those participating in this rebellion will realise that governments’ are not only unwilling to take remedial action, but are also unable to do so. The democratic system is so corrupt, with corporate interests the only ones that count for anything. As some placards on the protest stated, ‘system change not climate change’ a slogan used by ecosocialists for some time now, and I know of some ecosocialists who have been involved.

At this point, the rebels will either have to give up and go home, or go from rebels to revolutionaries. This does not mean resorting to violence, although at some point the authorities are likely to turn to violence. The power that we have just had a small glimpse of this past week, should be ramped up, but that will take more numbers. We saw how the police struggled with 1,000 people arrested, what would it be like with 10,000? With 100,000? If these kind of numbers can be mobilised, anything is possible.

There is also the Earth Strike planned for 27 September. If the workers, organised and unorganised can be brought on board for the revolution, we will see an unstoppable force, powerful enough to bring truly radical change. We could be on the verge of something almost unimaginable only a few months ago, real system change, or to put it another way, a revolution.
Posted by Mike Shaughnessy at 09:13