Climate change must be a thing. It’s on prime time TV 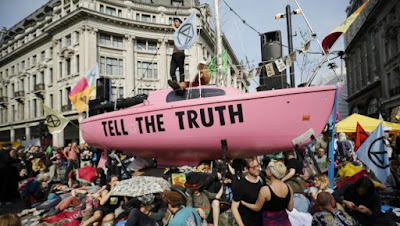 Written by Gabriel Levy and first posted at People and Nature

Key effects of global warming were reported bluntly to millions of TV viewers in the documentary Climate Change: The Facts, on BBC One on Thursday 18 April.

“It may sound frightening”, the super-popular TV naturalist David Attenborough said, introducing the show, “but the scientific evidence is that if we have not taken dramatic action within the next decade, we could face irreversible damage to the natural world and the collapse of our societies”.

The press loved it. “A call to arms”, The Guardian said. Would it “wake up philanthropists, investors and governments to act?” Forbes asked.

I wondered: why now?

The BBC hasn’t exactly rushed to portray global warming accurately. In 2011, two decades after the international climate talks started at Rio, scientists were slamming the BBC for giving air time to climate science deniers. In 2014, a BBC memo told journalists to stop pretending “balance” was needed between climate science and its deniers – but the practice continued, leading to another edict in September last year. By that time, researchers had started refusing to come into BBC studios to debate deniers.

But high-profile BBC journalists still felt compelled to interview anti-science nutters who are paid by the fossil fuel industry to advise Donald Trump. In October last year, when the Intergovernmental Panel on Climate Change report outlined measures to limit warming to 1.5 degrees above the pre-industrial level, Evan Davies of Newsnight gave Myron Ebell air-time to rubbish it.

By some standards, the BBC is doing well. After all, it took the Vatican 359 years to apologise for forcing Galileo Galilei to deny his finding that the earth goes around the sun.

The BBC aired Climate Change: The Facts a mere 30 years after scientists nailed down the causal role of fossil fuel combustion and other economic activity in global warming. Well done.

So, why now? Two main reasons, to my mind.

► 1. The reality of global warming is becoming blindingly obvious. Twenty of the hottest years ever recorded were in the last 22 years. Effects such as floods and the wrecking of agriculture have been felt in the global south for many years. Now rich countries, too, are being hit. Climate Change: The Facts dealt with this well, showing the devastation caused by wildfires and rising sea levels in the USA.

The school strikes have spread apparently completely outside of the influence of, let alone control by, existing political or environmentalist organisations. XR seems politically similar to earlier environmentalist groups – but, certainly here in the UK, no such group previously has brought so many people into potential confrontation with the law.

The political establishment’s instinct, I think, is to use a combination of dialogue, concessions, co-optation, and rhetoric to tame, constrain and control these movements. That’s not to say that repression will play no part: the police could abandon, at least partially, their softly-softly approach to XR. But social control under capitalism is as much about ideology and opinions as it is about violence and repression. (I am thinking about the UK, although some of these points apply more widely.)

Power, and the wealth it represents, can live with a “climate movement” that does not threaten its control of the economy and of society. Narratives that presume that existing political structures and parties could and should “solve” the global warming problem will be able to echo through the mainstream. Power has an interest in convincing people it is listening to them – and, since it knows people are not stupid, part of its technique is actually to do so.

The last 20 minutes of Climate Change: The Facts told the standard mainstream tale of how governments are dealing with global warming. It highlighted the 2015 Paris agreement – but not the fact that it simply continued a quarter of a century of negotiations, during which global fossil fuel use rose by half. It acknowledged that oil and coal companies resist change – but did not mention how governments support them with hundreds of billions of dollars of subsidies.

A real conversation about tackling global warming will start not with the international climate talks but with a recognition of their disastrous failure.

I am not a crazy conspiracy theorist who thinks David Attenborough is an instrument of some shadowy controllers. But clearly he is a suitable figurehead to bring “solutions” to global warming, that have been discussed for years among small groups of diplomats, politicians and NGOs at the climate talks, to a wider public. Because, as the Daily Telegraph put it, “we all trust Attenborough”.

The mainstream media discussion, of which Climate Change: The Facts is part, assumes that not only existing political structures, but also economic and social structures, can deal with the problem.

The possibility of bigger social transformations directed at overturning relationships of power and wealth – and the thought that these may be the most effective way, or even the only way, that the fossil fuel juggernaut can be stopped – is given little or no air-time. The idea that, in the rich world, people could live more happily outside the corporate-controlled fuel-guzzling technological systems in which they are currently trapped, is almost completely absent. So are suggestions that the global south is not doomed to follow this so-called “path of development”.

Admittedly George Monbiot’s call to “overthrow this system that is eating the planet” made it on to Frankie Boyle’s late-night comedy show. The media knows how to marginalise and patronise us, too.

I hope that the new climate movements will become open forums where ideas about radical social, political and technological change will be discussed. Let’s resist the pressure to corall the conversation within the mainstream’s ideological fences. 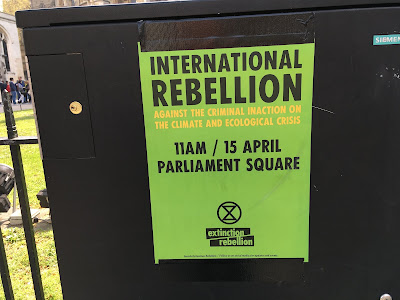 Take XR’s main political demand in the UK – that the country’s economy should be carbon neutral by 2025. Easy to say, hard to achieve.

One of the first questions XR will have to answer is the one posed in France: what about attacks on working people’s living standards packaged and presented as measures to deal with climate change? Such as the proposed diesel tax that triggered the “yellow vests” revolt in December last year.

A “climate movement” in the global north, divorced from the justified anger against neo-liberalism displayed by many “yellow vests”, is doomed to fail on a social level, and fatally flawed politically.

The whole point of neo-liberal “austerity” policies, practiced by president Emmanuel Macron in France today and by successive UK governments since the 1980s, is to protect and support the constantly-expanding capitalist economy, and the way it is structured to benefit the 1% – which, in turn, is the main cause of global warming.

The “yellow vests”, other anti-austerity movements, the school strikers and XR “rebels” are all up against the same machine. We all need common language and common politics (for practical suggestions, see the links at the end).

The issues we should focus on, I think, are “how can we unite these movements?” and “how can we develop real democracy, independent of the state, through which to work out measures adequate to prevent dangerous climate change?”. Rather than, “what advice can we give existing political structures – who have known for years how climate change could be avoided and have refused to act?”

If you think I am exaggerating about the danger of climate protest being co-opted and controlled, think about the fight against racism.

In the early 1980s, as the post-war social consensus was breaking down and Margaret Thatcher became UK prime minister, that fight centred on the 1981 riots. Black Britons, and others in their communities, turned the “inner cities” upside down and demanded better.

In the 1990s, when Tony Blair’s “New Labour” took over from the Tories, anti-racist narratives were increasingly co-opted and controlled. The 1999 Macpherson report into the killing of Stephen Lawrence, a black teenager, was a turning point: it found that the notoriously botched murder investigation showed that the police force was “institutionally racist”.

The establishment’s embrace of anti-racism produced many positive outcomes. Victims less often faced the wall of hostility the Lawrence family had faced. In schools, on the streets and in football grounds, open expressions of racism were challenged. The popular press changed, veering between subtle and subliminal forms of racism to competing for hypocritical “moral” high ground in denouncing racist individuals.

But the social and economic structures that multiply and encourage racism went untouched. The Blair government pressed ahead with sanctions against, and the 2003 invasion of, Iraq – resulting in the fundamentally racist mass murder of hundreds of thousands of civilians. Inherently racist immigration policies were tightened.

The end of this process is the current resurgence of racism. The structural underpinnings are UK support for new wars in the Middle East, in the first place the genocidal Saudi onslaught on Yemen, and the vicious “hostile environment” for migrants. The ideological outcomes are vicious Islamophobia throughout society and the recent upsurge of racist street actions.

Climate change, like racism, is a big, multi-faceted problem that defies simple “solutions”. Dealing with it means dealing with the social and economic system that has produced it. Don’t let the political elite and its media set the terms of our discussions about how to do so.

■ Memo to Labour: let’s have energy systems integration for the many (May 2018)

■ And there’s plenty more via the site contents

Posted by Mike Shaughnessy at 09:56