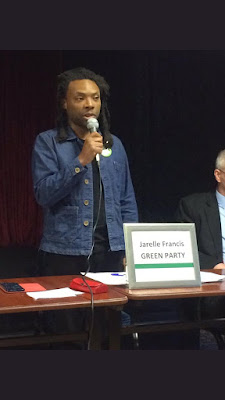 Tell me a bit about your background, how long have you lived in Haringey and what is your day job, for example?


“I was born in Tottenham and lived in Haringey for most of my life. I freelance working in Art Curation and I am working on a proposal to present to the council after elections for a schools art competition. I worked on a similar one last year in the Royal Borough of Kensington and Chelsea and it really helped to engage the young people there."

How long have you been a Green Party member, and what first attracted you to the party?

"I joined after the 2015 general election, I always had the intention of joining the Green Party but never got around to it. After the Tories won a surprise majority it accelerated my decision. I joined to fight against austerity and poverty, for social justice, for proportional representation and ultimately against neo-liberal policies which have a detrimental affect on our lives and the planet.”

We are starting to see some African/Caribbean candidates emerge, in London at least, as Green Party candidates, why do you think it has taken so long for this to happen?

“I think traditionally the Labour party was the party for Black and ethnic minority people, but this has changed over the years.

Under Blair/Brown Labour became a very closely aligned with Conservative policy and we are now seeing the fruits as Labour councils in London implement some of the most horrendous social cleansing. In my view the Haringey Development Vehicle (HDV) is an example of that.

People now understand that the Greens are a party for social justice, a party who champions being inclusive and also let's not forget that working class black people are more likely to live in areas of high pollution which affects health. So tackling that has come more to the forefront.” 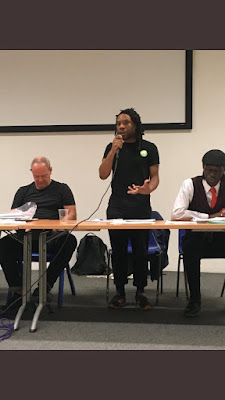 Violent crime in London is in the news at the moment, what should be done to reduce this?

“I am running this campaign with a clear message that we will reverse the cuts to and invest in youth services again.

There is no doubt that austerity is the main cause of these problems. The Conservative government has taken away EMA, tripled university fees, thus taking away further education as an achievable aspiration for the young working class. They have just taken away free school meals for the poorest pupils whilst we have 4.1 million children in poverty

Creative subjects like Art, Music, Drama have been cut in schools and the Labour Council have gone too far in cutting youth centres whilst spending money on ridiculous gimmicks like Chicken Town, or wasting money on new logos or most disgracefully spending money in court to fight for the HDV. This is all whilst our young people suffer, it is vitally important that we get on the council so we can challenge the way they spend.”

What is your view of the Windrush scandal?

"One of the things I try to tell voters is to look at policy over personalities if possible. The Conservative party policy was to create a hostile environment for all immigrants.
The immigration act of 2014 successfully did that with only 16 MP's (which included Caroline Lucas) voting against. So Labour are not completely exonerated from this either. Especially when under Ed Milliband they had the "control immigration" mug.
So why now we have all these crocodile tears and faux apologies when their policies have been successful I will never know!

Theresa May implemented these racist policies and should no longer be the Prime Minister.

When you pander to the far right and blame immigration for our countries ills, this is the fruit you bear from those seeds.

This also does not bode well for the 3 million EU citizens living here after Brexit, which is again being facilitated by both Labour and Conservatives.

The Green Party has always stuck up for migrants, free movement of people and it is one of the reasons I joined them. If you want to vote for a party who has always projected a positive image of immigration support us.

We are the sixth largest economy in the world because of immigration, not inspite of it and it's about time we started to appreciate migrants! We have a wonderfully diverse community in St. Ann’s and will continue to stick up for us all if I am elected or not." 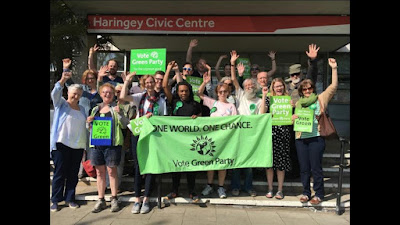 You are standing as one of the Green Party’s target candidates in St Ann’s ward, Haringey. What are the issues you are campaigning on?

“We need more council housing, not the "affordable" definition adopted by Boris Johnson and not changed by Sadiq Khan.

StART in St. Ann's a community land trust which is showing us a model which would can work and would be great for the St. Ann’s community.

Air pollution in and around the ward are at high levels and  so we need to think about closing school roads off, which in turn means we need to crate safe walking and cycling routes for all.

Also the cleanliness of the streets has come up a lot, so we need to make sure that Veoila are doing their jobs properly.”

How do you rate your chances of getting elected in this year’s local elections?

"We have a great chance of getting our first councillors in Haringey. Speaking to people on the doorstep they really understand how bad having a Labour council without anyone to hold them to account has been. But we need to make sure that you turn up on Thursday and that Labour voters split their vote so that we get a Green representation on the council."

If you are successful in getting elected to Haringey Council, what will be your priorities in terms of trying to make a difference?

I would also make sure the council understand how bad the air pollution is on Green Lanes, St. Ann's Road, West Green Road, Seven Sisters Road amongst other places and would mean us implementing new safe cycle lanes, cutting off roads to schools on the school run, and improving local transport.

Making sure HDV does not go through and supporting refurbishment over regeneration which generally means demolition. Supporting projects like StART which has a clear strategy of providing truly affordable housing for local people.

We won't be running the council, but we will be able to hold Labour to account and I hope Labour would adopt some of our positive progressive policies.

But we can only do all this with YOUR VOTES, it is so close, please give us an opportunity to be your voice on the council and vote for us on Thursday May 3rd!"