The tragedy of liberal environmentalism 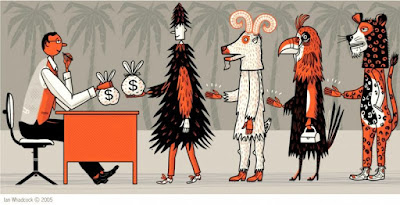 Written by Jessica Dempsey and first published at Canadian Dimension

I’ve spent much of my adult life reading about increasing rates of biodiversity loss. Academic journals, environmental organizations and even the popular press re-affirm that we live on a planet becoming more the same at every turn. As James MacKinnon poetically describes in his Once and Future World, we are living in a 10-per-cent world, one with only a fraction of the natural variety and liveliness it once had. I’ve also spent most of my adult life researching and participating in international biodiversity law and policy.

This is our situation: growth in legal, policy and cultural attention to biodiversity loss sits alongside growth in the rates of biodiversity loss. The woodland caribou (Rangifer tarandus), whose habitat runs from the eastern border of B.C. to the western border of Alberta, is an exemplar of this situation: It receives the highest legal protections as a designated endangered species, but is still likely to face extinction in my lifetime.

For many conservationists, the turn to economics and markets over the past two decades feels like a last hope. Walking through the streets of Trondheim, Norway, at the end of a major conference on biodiversity in 2010, a Canadian bureaucratic-scientist wearily told me that biodiversity must be made relevant to the Ministry of Finance in order to survive. Such relevance is created by calculating and valuing the ecosystem services provided by nature (ecosystem services are defined as the benefits that humans receive from the work of ecosystems: water purification provided by wetlands or most famously, the carbon sequestration services of living, photosynthesizing ecosystems).

The approach desired by the scientist-bureaucrat can be summarized as follows: “In order to make live, one must make economic.” In other words, for diverse nonhumans to persist, biodiversity conservation must become an economically rational, sometimes even profitable, policy trajectory. For several decades now, environmental economists and policymakers have discussed the need for a market in “avoided deforestation” — now going by the acronym “Reducing Emissions from Deforestation and Forest Degradation” (REDD+). This, the idea goes, would reduce global carbon emissions by paying developing countries to stop cutting down their forests, with the funding generated via the regulated international carbon market. Countries like Canada would be able to offset the tar sands, say, by investing in forest conservation in Madagascar. Such a mechanism, it hopes, would make forests worth more alive than dead.

But making nature economic doesn’t always mean making markets or new commodities. It can involve establishing differences between one or another course of action, like in cost-benefit analysis. A government might ask: are more services produced by a standing, diverse forest or an oil palm planation?

“To make live, one must make economic,” is not an entirely new idea. It is a variation on the compromise of sustainable development forged in 1992 in Rio, when heads of state decided that global environmental problems and vast inequities could be solved by a steady application of economic growth and technological innovation. More recently, this approach goes by the term “green economy.” Like sustainable development, the green economy is considered the pragmatic approach. It is an approach that leaves, for the most part, the foundations of our society intact: capitalist, nation-state centred and economic growth-oriented — but this time: green growth. Hence: pragmatic, meaning a sensible, realistic approach to saving the planet. 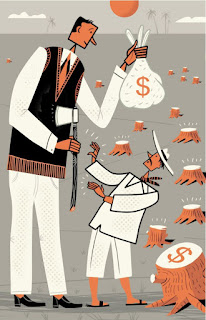 The desire of the green economy turn is well reflected in the above image from a 2005 edition of the Economist focusing on payments for ecosystem services. The image shows a sharp-looking, somewhat jolly, white, middle-aged accountant behind a desk, doling out money to an orderly line of half-human, half-plant/animal creatures. These creatures appear as happy-ish and perhaps bored labourers, although eager to receive their pay. The image reveals the promise of what I call “enterprising nature”: orderly, efficient social and ecological relations mediated through a monetary transaction. These creatures are enterprising — they are not receiving handouts, but rather their due payment for work completed.

Such a dream cannot be separated from colonialism. Indeed, in the same Economist article about nature’s services, a second image (left) shows a suited, happy man taking an axe from an alarmed peasant. In his other hand, the businessman is holding a big bag of money; coercion and cash payments appear intimately linked. This image portrays a stark imbalance of power and a continuity of asymmetrical power relations. Perhaps we might view the man with the axe as a renovated form of white, Western savior, a là Rudyard Kipling’s “White Man’s Burden.” Renovated, because the altered conduct — the wresting of the ax — is achieved through monetized economic transactions that are ostensibly “fair” and the amount of cash in the bag is determined through supposedly neutral ecological-economic calculations.

The image reflects a well-worn trope in international environmentalism — poor people like this peasant cause biodiversity loss through his demand for firewood or income, problems to be solved in this case by paying the peasant to live otherwise. Global environmental policies and politics so often direct our attention away from historical and systemic causes, preferring to focus our attention on the problems of the poor person with the axe.

Taken together, these two images appear to tell a strong story of an enterprising nature: the cover image reflects the promise of orderly, efficient relations, directed by ecologies and economics; this second image calls at tention to the processes of uneven development that run along geographical — but also classed, racialized, and gendered — hierarchies.

If the two-image story were accurate and complete, enterprising nature would be a tidy set of processes that swiftly allocate resources in order to protect diverse ecosystems according to the values of northern elites.

And such a swift ascent would make sense. Enterprising nature seems, theoretically and practically, an approach to biodiversity conservation that is entirely compatible with contemporary capitalist, global political-economic relations. And the proliferation of discourse and initiatives, involving such high-powered financial actors like JP Morgan and Hollywood actors, appears to suggest that enterprising nature is on its way to being mainstreamed in global capitalism.


However, what a close study of enterprising nature shows is not a triumphant ascent but rather a set of almost Sisyphean challenges: technical, scientific, economic and political. Governments do not agree to make new markets in avoided deforestation or in biodiversity conservation. Scientists and economists conduct fractious scientific debates on how to tether uncertain ecological data to economic value. In terms of capital flows, the global forest carbon market transacts a teeny-tiny amount: around $250 million per annum, about the size a single modest WalMart store transacts per year (and compare these tiny drops of cash for conservation to the $60-billion market in palm oil, a leading cause of deforestation). And while there is a growing mountain of scientific evidence demonstrating the economic value of nature, governments continue to make development decisions that erode the web of life. Think of the recent Trudeau government decision on Kinder Morgan, one that put ecosystems at further risk from spills and climate change. In sum, enterprising nature may be better conceived as more utopian than pragmatic. At the very least, the man behind the desk should be sweating, with a rumpled shirt and dark bags under his eyes; the animals negotiating hard for a raise in pay.

There is much to be concerned about with this approach, in particular the way that ecological crisis is pictured as an opportunity for profit, driving new and old forms of “green” land/ocean grabbing. Critics, and I include myself as one of them, rightfully worry that “selling nature to save it” will re-embed status quo social relations and further subsume biological processes to capital. (Although projects must be studied in situ — some Indigenous communities are actively participating in the forest carbon-market and in other payments ecosystem service schemes because they help secure land rights).

And enterprising nature is at once a totalizing discourse that reflects hegemonic, capitalist notions of value. But despite being so easily adopted in the lingo of some of the world’s financial and governmental elites, it remains on the margins of political-economic life, on the outside of many flows of goods, commodities and state policies.

Looking into the abyss


Looking straight into the abyss: we are living on a planet that is less lively, less bio-culturally diverse by the year, an Earth, as Donna Haraway writes, “full of refugees, human and not, without refuge.” And even the most palatable, status quo–affirming, neoliberal strategies to scale biodiversity conservation up — strategies emerging from places of significant cultural, political and economic power — are in a state of arrested development.

The dominant and marginal position of enterprising nature is reflective of what I call the tragedy of liberal environmentalism, a spin-off Garett Hardin’s famed Tragedy of the Commons, a much-repeated mantra in environmental circles. Liberal environmentalism is an approach to ecological decline that keeps the foundations of liberal capitalism intact, aiming to improve, even perfect those foundations. Internalize the externalities! Measure so we can manage! Liberal environmentalism is an approach premised on a smooth space of politics, one where all the different players can find common ground through dialogue, or even better, the neutral words of numbers and even money (like the images suggest). It aims, as much as possible, to avoid dirty, asymmetrical, bloody politics. It seeks an orderly, technical solution. Despite its marginality, the enterprising nature story is a powerful salve, a kind of chicken soup for the environmentalist soul. It is a story that manages, moderates and mediates the problem of the fraying web of life with its message of ever-increasing rational decision at the hands of the right ecological-economic facts.

The tragedy of liberal environmentalism is that it occupies the political discourse as the most pragmatic, the most possible way to a better future, but implementing this watered down, technical environmental politics is not at all smooth, or easy. It is rather Sisyphean. This is the tragic political circumstance of our times: What is framed as easy, as the most compatible with the status quo, is actually so very, very hard.

In a strange twist, the arrested development of enterprising nature provides fodder for those advocating a political-economic and historical understanding of ecological decline. Even on its own terms, its marginality illuminates how capitalist social relations rely upon externalized, devalued and appropriated natures. Ecofeminist Maria Mies visualizes the economy as an iceberg. The visible tip represents the formal economy — where capitalist value emerges from exploited waged labourers and the circulation of monetized goods and assets. Underneath the waterline lurks the rest of the iceberg, and its size dwarfs the tip. Here, Mies points to a much larger world of exploitations on which commodity production and profit-making depend: women, colonies and at the very base, nature. The bodies, places and materials of the submerged, invisible iceberg supply unwaged labour and unpriced inputs and energies that are productive; capitalism depends on this deeply undervalued work, work that is so often precarious and death-dealing (in the nonhuman realm, think extinction or loss of refugia).

Read through Mies’ iceberg, biodiversity loss is not a side effect or externality that can be easily fixed with economic valuations. Rather, the kind of invisibility enterprising nature aims to correct is literally baked into economic systems. In this way, the strategy of enterprising nature is at once reflective of neoliberal capitalism’s drive to remake the world into competitive, marketized units as well as being a far-reaching and radical proposition, one that is butting up against the structures of capitalism.

Jessica Dempsey is an assistant professor at the University of British Columbia (Vancouver), Department of Geography. Her new book, Enterprising Nature: Economics, Markets, and Finance in Global Biodiversity, is available from Wiley-Blackwell Press.

Posted by Mike Shaughnessy at 08:30