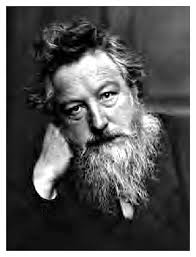 I want to suggest that many of the ideas and practices which we advocate today in the Green movement owe their origins to Morris - perhaps indirectly.

He seems to have been one of the first Victorians to address himself consciously to the question of our relationship with nature, the natural world - i.e. rather than just write about it, or paint it, he suggested concrete steps that might be taken to preserve and enhance the beauty of the natural world and of the countryside. Some of his major interests are those which are still very much central concerns of the Green movement today - for instance his concern with the Nature of Work. His discussion of the Nature of Work develops from ideas first discussed by Carlyle and Ruskin.

We will first of all consider the final paragraph of A Dream of John Ball:

But as I turned away shivering and downhearted, on a sudden came the frightful noise of the "hooters," one after the other, that call the workmen to the factories, this one the after- breakfast one, more by token. So I grinned surlily, and dressed and got ready for my day's "work" as I call it, but which many a man besides John Ruskin (though not many in his position) would call "play."

This is a point that Morris develops at greater length in News From Nowhere. Because Morris enjoyed his work and was self-employed - indeed, was an employer - many people would have thought of his work as play, because it was enjoyable. It seems as though the section on Workers' Rights in the England and Wales Green Party's Manifesto for a Sustainable Society reflects this:

WR101 We define work in the full sense, not the traditional limited definition as employment in the formal economy. Green thinking recognises the latter as one part of the whole - a large part, but not the only one. Work exists in a variety of forms, each related to and often affecting others, like species in an ecosystem. Work covers all the activities people undertake to support themselves, their families and communities.

I referred to Carlyle because he perhaps stimulated Morris's examination of the Nature of Work. Carlyle himself never really tries to define what work IS, and he certainly has no truck with the idea of Pleasure in Work - in fact he more or less dismisses the idea of happiness as an irrelevance; he almost seems to advocate 'useless toil' as being at least preferable to 'idleness' - however you define idleness. Certainly Carlyle, writing in 1843, was in a position to observe the Industrial Revolution at first hand, and to see the degradation of the worker from an 'artisan' to a 'hand', the appendage to a machine. But the remedies he proposed were vastly different from those proposed by Morris - not only is Carlyle vague about the definition of work, but he sees restoration of feudal authority as the only true remedy for the evils of laissez-faire capitalism. In fact both Carlyle and Ruskin seem to hold the view that if everyone remained content in their stations, and the workers worked and their 'natural superiors' recognised and lived by the principle of noblesse oblige everything would be fine and there would be no need for revolution.

Perhaps Morris's concept of The Nature of Work should be seen as a reaction against the Protestant ethic expressed in Ruskin's writings, and the dour Calvinism of Carlyle. I think the problem with Carlyle and Ruskin was that they never quite came to terms with the fact that work basically consists of the production of commodities, or more properly the production and exchange of commodities; Morris had grasped this even before he read Marx, and he discusses:

A related theme is the question of how Morris's expression of his love of nature, of landscape, of the English countryside, (a) is expressed in his poetry and later prose works; how it changed and developed as he travelled the road to Socialism.

Thus we could say that Morris's vision of the Middle Ages as a time of artistic excellence (he regarded the Renaissance as the beginning of degeneracy and decay in the arts) functioned as a blueprint for what the world might be like after the Socialist revolution. He did not idealise the medieval period in the way Ruskin did, or the way the Pre-Raphaelites did in their paintings, but he was aware that the art/craft of the medieval period was an expression of some creative spark that (he felt) the Victorian period had lost. Thus in some ways Morris could hardly be said to have idealised the medieval period at all. He admired the art of the period, which is not quite the same thing.

I did say that his expression of his vision changed - but the vision itself did not change all that much. He saw Socialism as the means to achieve his vision of an integrated, whole society, in which the landscape was not damaged, and in which the stark division between town and country was abolished - expressed most elaborately in News From Nowhere, of course. The idea of the abolition of the division between town and country (i.e. the abolition of large manufacturing districts such as, in the 19th. century, Leeds, Manchester, etc) was a common feature of Utopian writing. And Marx had stated that one of the tasks of Socialism would be to end this division. Again, this is something that most environmentalists regard as a priority, even if they may not have heard of Morris and don't approach the question from a Marxist perspective. Note, for instance, these extracts from the England and Wales Green Party's Manifesto for a Sustainable Society:

CY201 We believe that is a fundamental human right and obligation for people to live in a style that ensures they can hand on to their descendants an environment that is at least as rich in wildlife and attractive landscapes as when they inherited it.

CY202 Rural and urban communities meet the many different needs of people in a healthy society. They are not separate from each other and one should not dominate the other. In a green society, towns will not grow beyond the ability of the countryside around them to provide fresh and healthy water and food, recreation, timber and wildlife habitats. There will be a constant flow of environmental, social and cultural information between them. Towns will return compostable materials to the countryside. These urban communities will integrate into all their decisions the impact on a vital, thriving rural community.

The vision of society in News From Nowhere is one that is close to the vision of a possible future society expressed in many green/environmental manifestos and blueprints. For instance, the Thames is so clean - due to a lack of industrial pollution - that there are again salmon in the river near Hammersmith. The society has no money, it is a barter economy, people produce (a) what they need (b) what they LIKE. Piccadilly is a market, but one 'ignorant of the arts of buying and selling' - beautiful hand-made craft goods are exchanged and donated. The whole of London has reverted to being villages and parks. All the houses have gardens and (of course, this being Morris's dream!) all the buildings are well-built and attractively ornamented, but NOT VULGAR.

Morris repeated over and over again his hatred of the ugliness caused by rapid industrialisation; poisoning of the atmosphere by sulphurous emissions from factories, pollution of rivers, cutting down of trees - in short, the wholesale destruction of what we should now call the environment.

It is as well to recall here that the terminology we now use was not used by Morris and his contemporaries, although I am suggesting that he gave the impetus to many of our own environmental concerns. At certain points Morris still used vocabulary such as "conquering Nature", "our struggle with Nature" and so on, which indicates that, though he did his best, he could not entirely free himself from the mind-set that saw Nature as a hostile force to be conquered and subdued, or the Conquest of Nature as something desirable … although his awareness of humanity as a part of Nature is usually to the fore. It is possible that he used this terminology as an initial point of contact with his audiences.

For most of the 19th century, "environment" was a neutral term meaning "the surroundings", "where we live" - it didn’t have the emotive weight it carries today. Similar, the word "ecology" (first recorded in English in 1893 according to “Ecology for Beginners”, but used by Thoreau in 1856, according to the OED) was not used with any positive or negative connotations - the general public were less aware of what an ecosystem was and how it could be damaged.

Morris, like Engels, (and even Ruskin and Carlyle, as we have seen), was perfectly well aware of the dehumanisation of work and of the degrading, cramped and unsanitary conditions in which the working class lived. And he did set out to campaign against all this. He did visit industrial towns and saw how ugly and dirty they were, and was indignant at the conditions in which the workers lived. My point throughout has been that Morris's ideas on the environment have had a great influence on the environmental movement, and Morris never denied that he was a member of the bourgeoisie - what is true is that has taken a century or more for some of these ideas to be taken up by large numbers of people.

Unfortunately, it has to be conceded that the Green movement is still perceived in some quarters as something of a middle-class hobby, at least in the UK and the USA.


So perhaps I could sum up by saying that Morris has influenced the Green movement in ways which he could not have anticipated, but would surely have been happy to know about. I think, though, that it was his perspective as a Socialist activist that enabled him to develop ideas and theories that could have practical application; as a young man, his poetry celebrated the beauty of nature, but it is in his prose writings and lectures that we see a development towards an active 'Green Socialist' perspective.

Jane Susanna Ennis is a member of Camden Green Party and a Green Left supporter.

Posted by Mike Shaughnessy at 05:57