The Play ‘Limehouse’ and the Parallels for the Labour Party Today

Over the weekend I went to see the new play written by Steve Waters, ‘Limehouse,’ which is set in 1981 and dramatises the meeting in Limehouse, east London, where the Social Democratic Party (SDP) was formed. This led to the so called Limehouse Declaration. The play depicts a Sunday brunch at the home of David Owen and his wife Deborah Owen (née Schabert), with Roy Jenkins, Shirley Williams and Bill Rogers, where they wrestle with the idea of breaking away from the Labour Party and founding the new party. Most of the audience were, like me, old enough to remember this episode of British political history. The remaining ‘gang of four’ as they became known, have said that the play is a reasonably accurate portrayal of the day.

Some wrestle more than others, with Owen and Jenkins, although having their differences, chiefly over linking to the Liberal Party, are in favour of making the break, but Williams and Rogers are less convinced. The play brings out this division in the group, and not only because of the practical difficulties of forming a new party with no roots and an electoral system which makes it very difficult for new parties to flourish. Williams and Rogers are also the most attached to the Labour Party, it is ‘in their blood,’ as Rogers says in the play.

Something I wasn’t really aware of, which the play picks up on, is that Deborah Owen was central to the meeting even taking place and handles the differing personalities in attendance with great skill, much better than her husband does. The new party may never have come in being without Deborah Owen’s input.

The play is well written and well acted, David Owen (Tom Goodman-Hill) comes across as vain, arrogant, ambitious and impatient; Roy Jenkins (Roger Allam) as rather pompous with a penchant for fine red wine, but persuasive and passionate, who confesses to always having been uncomfortable in Labour; Shirley Williams (Debra Gillet) loyal to Labour and very cautious about political moves and a very sharp political thinker; Bill Rogers (Paul Chahidi) also loyal to Labour and with a deep love of politics, modest, as well as being a genuinely nice bloke. Deborah Owen (Nathalie Armin), a very good ‘people person,’ with excellent communication skills, and very supportive of her husband’s ambitions. 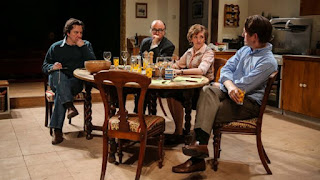 I can confirm that Bill Rogers does have a love politics and is a very nice bloke, as I have actually met him. In 2008, I had my first council by-election as Green Party election agent, in the ward of Highgate (Haringey). I was manning one of the polling stations as a teller on the day of the by-election, and imagine my surprise to find the Lib Dem teller was none other than Bill Rogers.

I had quite a long chat with him about politics, as is the way amongst tellers, and I remember mentioning to him that I had recently read the SDP’s 1983 general election manifesto on the web and that I thought it was, by today’s standards, pretty left wing. Bill said that politics was very different in 1983, for one thing the Green Party didn’t exist then (this is technically true, but the party was still known as the Ecology Party at the time), but I took his point. It was a very enjoyable chat I had with Bill Rogers, and I was a little surprised as he hadn’t come across that well in the 1980s. Maybe it was because I hated the SDP at the time, for letting the Tories get in government with landslide majorities with only 44% of the vote.

The opening line in the play is spoken by David Owen to his wife, ‘the Labour Party is fucked.’ So we are straight away into in the parallels with todays’ politics. How many Labour people have been saying much same since Jeremy Corbyn became leader of the party in 2015?

In 1981 the left-wing Bennites had taken control of Labour’s conference, a faction of the party that Corbyn belonged to, although he didn’t become an MP until 1983. In the play, David Owen laments the abilities of the then Labour leader, Michael Foot, as useless, another echo of the present day, with Labour MPs queuing up to share that sentiment now. A woman Tory Prime Minister, hell bent on pursuing hard right policies, and the Labour Party in the midst of a civil war, expending most of their political energy on fighting each other. The Labour Party moving to the left, creating tension in its right and centre sections. A possible catastrophic defeat at the next general election looming, probably even worse than 1983, given that Scotland has now been lost to the SNP. And Europe.

There are differences today of course, Scotland being one, but inside Labour itself the new membership phenomenon that has carried Corbyn to victory, is largely uninterested in Labour rule books and boring meetings trying gain tactical advantages in local parties. The right in Labour is using the same tactics as the left in the 1980s in local parties, and boring the average member away.

But the main difference is that there will be no breakaway this time. The Labour right has learnt the lesson of the SDP, which after much media fanfare and gaining 50% in the opinion polls, gradually faded away. It merged with the Liberal Party to become the Liberal Democrats in 1989. David Owen resigned and carried on the SDP, until they finished behind the Monster Raving Loony Party in a by-election in Bootle, Liverpool.
The party promptly disbanded.


Political parties can’t be made from the top down, they need roots in communities, that is as true today as it was in the 1980s, and although a break away Labour might call itself Social Democratic Labour, or such, to try to retain some roots, it could only possibly work with the support of the big unions, which looks unlikely. We are into another rule book war over the number of MPs nominations needed to stand for leader, when Corbyn does stand down or is defeated in a members’ ballot. That much is certainly the same carry on as in the 1980s, and it will cripple the party in same way as it did then.
Posted by Mike Shaughnessy at 10:31