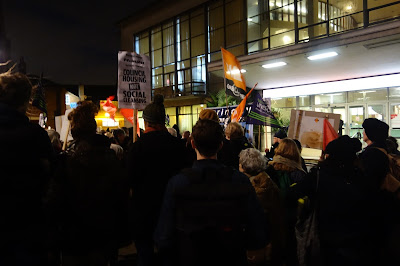 Haringey Council’s Cabinet committee in north London has confirmed that a £2 billion redevelopment housing scheme in the borough, will be carried out in partnership with the Australian building company Lend Lease. The company is the preferred construction management services company of the Trump Organisation, owned by US President Donald Trump. Lend Lease was given $200 million to redevelop The Old Post Office, in New York City, into what will be one of the newest additions to the rapidly growing Trump Hotel Collection.

The deal with the Labour run council will be 50% owned by the council and 50% owned and 100% managed by the property developer, and there is no guaranteed right of return for tenants or owners. The joint venture is known as the Haringey Development Vehicle. A final decision by the council is expected in the summer.

All of these estates in Tottenham are at risk of demolition:

The construction company has a chequered history, to say the least. They have admitted to a huge fraud scheme in New York, in which it overbilled clients for more than a decade and has agreed to pay $56 million in fines and restitution to avoid criminal charges. The company also admitted that it evaded government rules to hire a specified percentage of firms owned by minorities and women.

On the Old Post Office hotel development, the US Labor Department are investigating claims that that Lend Lease paid less than the minimum wage to workers on the project. “It’s yet another example of Donald Trump’s relentless hypocrisy and gross mistreatment of workers,” said Josh Goldstein, a spokesman for the AFL-CIO union federation.

Another investigation by the Labor Department is looking into similar claims where a sub-contractor employed by the Trump organisation did not pay the minimum wage to workers on another hotel construction project in Washington DC. Many of the workers have admitted to being illegal immigrants, mainly from Mexico.

On top of this an electrical contractor is suing Donald Trump's Organisation for $2 million, court documents show. The contractor, Freestate Electrical, alleges that Trump's company hasn't paid its bills for work it did on the hotel project last year.

In Australia, Lend Lease has been fined $200,000 in relation to the death of a rail worker and serious injuries suffered by four others near Maitland. The total amount of fines issued by the Industrial Court in relation to the incident is now $660,000 as well as prosecution and court costs in the thousands of dollars.

Meanwhile, closer to home in London, the £1.5 billion regeneration of the Heygate council estate in Southwark which was undertaken by Lend Lease, the council’s documents show the council only got £55m from the 22-acre site, knowing that it has already spent £43.5m on the project so far, and is expected to spend £6.6m more before the final demolition. As a comparison, the neighbouring Oakmayne/Tribeca Square development site, which is only 1.5 acre, got sold in 2011 for £40m.

Lend Lease is estimated to have made a £194m profit before any overage profit is shared with Southwark Council, whilst only 45 out of 1,000 secure tenants ever returned to the new homes which had been promised.

A report by Southwark council officers said Lend Lease baulked at providing social units as this would require a second lobby and lift shaft to separate the two types of residents, adding: “not doing so would have significant implications on the valuations of the private rental properties.”

The company also worked on the London 2012 Olympic Park. It is not known how much profit they made from the Olympics, but its profits rose by 28 per cent in 2012 - when it was built – though we know that the project cost the taxpayer £275m in total.

Haringey Council should stop pursuing this venture and choose the 100% council-owned vehicle option. This will ensure the council has 100% control of public property and land, as well as enabling the council to retain profits.

Gordon Peters of Haringey Green Party, who has launched a legal challenge against the council, said:

“It’s what has been called social cleansing - and that is exactly what it increasingly is going to be, if not stopped.”

You can contribute towards the £4,000 cost of the Judicial Review of Haringey Council's decision here: 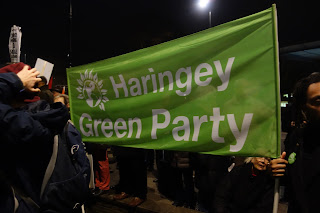 Posted by Mike Shaughnessy at 10:42