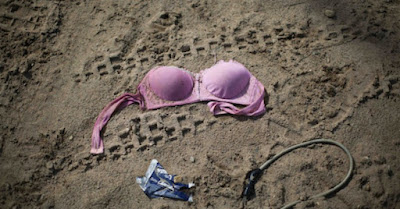 After a government raid last year on an illegal mining camp in La Pampa in the Madre de Dios region of Peru, a discarded bra lies on the ground outside an informal bar that allegedly employed sex workers. (Photo: Rodrigo Abd / AP)

Written by Chris Hedges and first published at Truthdig.com


The decision by Amnesty International’s decision-making forum, the International Council Meeting, to call for the decriminalization of prostitution is another in a long line of triumphs for heartless neoliberal economics and the grotesque commodification of human beings that defines predatory capitalism.

Salil Shetty, secretary-general of Amnesty International, said: “Sex workers are one of the most marginalized groups in the world who in most instances face constant risk of discrimination, violence and abuse. Our global movement paved the way for adopting a policy for the protection of the human rights of sex workers which will help shape Amnesty International’s future work on this important issue.”

In the sickness of modern culture, the ability to exploit with impunity is distorted into a human right even by a renowned and respected humanitarian organization. That is quite a card trick. We live in a global culture where the wretched of the earth are chattel and where sexual slavery—which is what most prostituted women and girls around the globe endure—is sanctified by market forces. These women and girls are among our most vulnerable. After being crushed by poverty, racism and sexism, they are unable to find other ways to make a sustainable income. They are treated little better than livestock transported to markets for consumption. That a so-called human rights organization parrots vile justifications is emblematic of the depth of our moral degeneration and the triumph of misogyny.

Women and girls who are prostituted should be treated not as criminals but as victims. The criminals are the johns and the pimps and traffickers who profit from the sale of human flesh. Decriminalizing prostitution, which allows these modern slave masters to openly ply their trade, means the exploitation will grow explosively. We must work to create a world where those who are dispossessed of their human rights are not forced into this dilemma. We must not accept a world where poverty destroys the lives of the weak and the vulnerable, including children. Those who profit from prostituting women and girls must be driven out of business.

“In sheer numbers, it is the poor brown women of the world who pay with bruises, humiliation and deaths for this ignorant and hideous decision that has brought Amnesty International so low,” Lee Lakeman, the Canadian feminist, told me by email. “When Amnesty International’s ‘progressive leftists’ blithely refer to ‘free choice to prostitute,’ do they choose to forget prostitution as imperialism? Third world brothel cities, the tourist brothels sprung up where once armies were stationed, man-camps of resource thieves that overrun indigenous communities, UN troops buying sex from women in refugee camps by offering them food? Abandoned migrant addicted kids and women in the ghettos of the world’s cities being bought for the price of a quick hit? Or are they [Amnesty and those who support its decision] imagining this free choice: the women, babes in arms migrating from war zones and environmental deserts who are bought with rides, food, water or with a chance to save a child? Surely they know how indigenous girls are groomed with drugs and alcohol and rides to the city from hopeless homelands.

But they cannot have missed the inherent racism of prostitution that exoticizes every racial stereotype of woman on the back pages and internet sites of the world. And those of us, women of the global north, who have food and shelter? We fight now for the public life of full citizens. Are we obliged every time we leave our houses to face a barrage of men bloated with entitlement of class and race and sex, who sit scanning as we pass for our price tag? Consciousness is in part knowing who is standing with you. We know Amnesty International sold us out.”

Among those, including women, who have no concept of what being prostituted really means, it has become hip and edgy to talk about the legitimacy of “sex work.” Movies like “Pretty Woman” and the pro-prostitution lobby’s slick portrayals of the “sex industry” bear as much resemblance to the reality of prostitution as “Sands of Iwo Jima” does to war. If you want an honest window into what the prostitution industry is like, read “Paid For: My Journey Through Prostitution” by Rachel Moran, who at 15 was prostituted on the streets of Dublin. She endured this nightmare for seven years.

Moran says, based on her experience, that there are three types of men who use prostitutes: those who treat women as if they do not have human emotions; those who are conscious of a woman’s humanity but choose to ignore it; and those who derive sexual pleasure from crushing the humanity of the women they buy.

Our culture, manipulated by sophisticated forms of propaganda, mesmerized by commercially created images that glorify violence and sexual exploitation and consumption, cannot untangle fantasy from reality. Many, maybe most, men have been indoctrinated by pornography. Pornography has taught them that their personal gratification at the expense and degradation of another is a human right. This indoctrination has twisted feminism, which once fought for oppressed women and girls, into an accessory to misogyny. Why would genuine feminists organize or consider taking part in “SlutWalks”? Why is the election of a female president or the appointment of a female CEO an advance when at the same time—often with the collaboration of elite women—social and governmental programs that provide assistance to poor and working women are abolished? The current generation of neoliberal “feminists” cite the empowerment of a tiny, predominantly white female elite as proof of feminist advance. Women and girls who are poor, racialized or part of the working class, like all of the vulnerable in our age of predatory capitalism, are ignored and discarded, along with most of their advocates. This is not an advance for women. It is a profound setback.

“Capitalism and prostitution are the new method of imperialism and colonization,” said Alice Lee, a member of the Asian Women Coalition Ending Prostitution, whom I reached in Vancouver. “It is no coincidence that pornography and prostitution use racial stereotypes to sell and exploit women.

Prostitution is a tool that subjugates women, especially women of color, reinforcing sexism and the global racial hierarchy. The normalization of sexualized racism entrenches the idea that women of color and poor women are dispensable/disposable in all nations. The global north no longer has to occupy our lands. They can occupy our bodies and define our worth. This othering enables them to see us as less than human.”

Being prostituted is perpetual rape. Being prostituted means your orifices are penetrated a dozen or more times a night by strangers who often insult, maul and beat you. This happens in cars, in alleys, in “massage parlors,” in brothels, in motel rooms. And those who make the real money are not the exploited and the abused but the pimps, traffickers and brothel and massage parlor owners. Being prostituted means vaginal and anal tears, bruises, broken bones, sexually transmitted diseases including HIV, and severe psychological damage. And it can mean death. It almost always means early death. Those who must endure this abuse are almost always women of color, many shipped by traffickers from poor countries to relatively affluent countries for the sole purpose of being sexually exploited.

“Rape, wife battering and pornography serve to put women in their place,” Lee said. “That is the function of male violence against women. When women hear and see other women being raped, battered or prostituted, we know this could easily happen to us. Sometimes in the pro-prostitution argument you will hear that prostitution will prevent men from raping ordinary women. But by accepting prostitution we are accepting a class of women being expendable, as if that will prevent men from raping and beating us. Only when all women achieve liberty and autonomy can we be free.”

I suffer from post-traumatic stress disorder from my years as a war correspondent. I instantly recognized fellow sufferers of PTSD in prostituted women and girls when I interviewed them in refugee and displacement camps in Latin America, Africa and the Balkans. Prostituted women in and near war zones are as commonplace as corpses. Once a culture descends into the sickness of violence, once a culture allows human beings to become racialized objects of exploitation, there is an explosion of rape and prostitution, along with pornography. War, like neoliberal economics, sees only commodities, not sentient beings with the ability to feel pain and joy. And making war on people, as well as the planet, lies at the heart of neoliberal economics.

Prostituting women and girls is a lucrative business. Germany, which legalized prostitution in 2002, is now being called “Europe’s biggest brothel.” It has industrialized sexual exploitation with a terrifying corporate efficiency. Over a million men a day engage in these transactions, sexually exploiting women and girls who come mostly from poor countries in Africa and Eastern Europe.

These women and girls have been shipped to Germany to satiate the physical desires of the affluent and enrich the pimps and traffickers who control them. The women and girls do not do this because it is a choice. They do this because they are desperate and poor. The German magazine Spiegel published an investigative piece that lays out this abuse in detail, “How Legalized Prostitution Has Failed.”

Amnesty International has, in essence, legitimized the weapon of male objectification and violence in the war against women. This weapon exists apart from the evils of global capitalism. The fight to end male violence against women has to be integral to those of us who also fight global capitalism. We need the liberation of women and girls, including those who are poor and of color. Women cannot join the fight for a better world until male violence and male entitlement are eradicated. Freedom from exploitation, especially for women and girls, will define the success or failure of our struggle. To be an anti-capitalist, to be a member of the authentic left who stands with all of the oppressed, is to embrace radical feminism—not the mock feminism of neoliberalism but the true feminism of Andrea Dworkin. It is to recognize that no assault against capitalism is possible, or morally permissible, unless it is accompanied by an assault against male violence and the exploitation of women and girls.

Chris Hedges writes a regular column for Truthdig.com. Hedges graduated from Harvard Divinity School and was for nearly two decades a foreign correspondent for The New York Times. He is the author of many books, including: War Is A Force That Gives Us Meaning, What Every Person Should Know About War, and American Fascists: The Christian Right and the War on America. His most recent book is Empire of Illusion: The End of Literacy and the Triumph of Spectacle.
Posted by Mike Shaughnessy at 11:28