Extract From: Ecosocialism Not Extinction 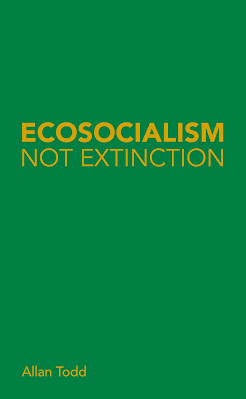 “The central preomise of ecosocialism, already suggested by the term itself, is that non-ecological socialism is a dead end, and a non-socialist ecology cannot confront the present ecological crisis.”

As a clear and concise explanation of the nature of ecosocialism, the above quotation from Michael Löwy would be difficult to better.

Essentially, ecosocialists recognise that, because of the profound crises currently facing humanity and the rest of the planet’s species, both the socialist and the ‘green’ projects need to be redefined.  These multiple and interlinked crises - climate, ecological, economic, social and political - mean that, in the twenty-first century, it is no longer simply a question of either trying to ‘green’ parts of capitalism, or even replacing capitalism with twentieth-century conceptions of socialism.  We need to have an ecologically-sustainable planet, because, quite simply, there can be no viable life, let alone socialism, on a dangerously-degraded planet. Given the failures and part-failures of the COP process, it is now absolutely clear that capitalism cannot deliver that ecologically-sustainable planet…

For ecosocialists, it is now abundantly clear that capitalism is creating dangerous - and possibly fatal - ruptures in the Earth System. Yet, even today, many activists in social movements and centre-left parties are failing to grasp just what is likely to be coming round the corner if serious climate action is not taken in the next few years.  To put it starkly, we are currently living through the greatest crisis in human history: a crisis consisting of several unprecedented but linked crises. If these crises are not radically and quickly addressed, the result will almost certainly be the collapse of human civilisation as we know it.  Or, at the most extreme, the extinction of huge numbers of most of the species on this planet, including humans…

One rapidly accelerating, impact of global heating is the loss of species - so much so, that it is now generally accepted by experts that we are living through the sixth mass extinction of animal and plant species in Earth’s history, with an extinction rate 1000 times higher than the normal rate. And this is what is happening now, when the increase in the average global temperature is around 1.3oc. Yet, in 2012, the World Bank had reported that scientists were almost unanimously predicting that, if no significant policy changes were undertaken, then the average global temperature would have risen by 4oc by the end of this century - and possibly by as early as 2060.

A study in 2018 predicted that such a rise in average global temperature would see up to half of animal and plant species becoming extinct by the end of the century. While, in 2019, a UN study predicted that some one million species are facing extinction in the near future.  Such a collapse in biodiversity would put human communities at risk, as a result of loss of food sources, pollution of fresh water systems and the oceans, and erosion of natural defences against extreme weather events. Yet, so far, most pledges made at the various COP meetings have yet to be fully implemented.  Of particular concern is the fact that earlier predictions regarding the timing and intensity of the impacts of global heating have proved to be too optimistic….

As a succession of modern ecosocialist writers, including John Bellamy Foster and Paul Burkett, have convincingly established, there has long been a close connection between socialism and ecology. This connection goes back to Karl Marx who, in the second half of the nineteenth century, developed several key ecological ideas on the relationship between human activity - more precisely, capitalist activity - and nature.

As early as the 1850s, Marx drew attention to what he called the dangerous ‘metabolic rift’ - or unsustainable ecological dislocation - that capitalism, because of its built-in drive for continuously-increasing production and ever-rising profits, inevitably creates between humans and the rest of the natural world. Essentially, the capitalist mode of production and accumulation treats nature as capital to be exploited, and ignores the Earth’s planetary boundaries to growth.  In the early 1860s, Marx also became interested in the concept of the atmospheric ‘greenhouse effect’, which was just being raised by the Irish physicist, John Tyndall. Marx made the point that neither human societies in general, nor private companies in particular, own the natural world, and that therefore they should not degrade it. Instead, Marx argued that each generation had a duty to pass it down to succeeding generations “in an improved condition.”

Engels, too, also produced ecological writings, commenting on capitalism’s increasingly destructive impact on nature, of which we are a part, and on which our survival as a species ultimately depends. As early as the 1840s, he wrote of the environmental and industrial pollution associated with capitalist manufacture and urbanisation.  Sadly, some of Engels’ work on ecological matters - as with some of Marx’s writings - were not widely disseminated at the time, indeed some were not published until decades after they were written. Thus they were largely unknown to those who nonetheless saw themselves as socialists or Marxists.

Engels, for instance, in The Dialectics of Nature (an unfinished work from 1883, not published until 1925), warned about the possible consequences of our interference with nature, and commented that humans should not be fooled by apparent ‘victories’ over nature, because of unforeseen effects: “For each such victory nature takes its revenge on us.”  […], it is possible to see the emergence of Covid-19 as an example of nature taking its revenge on us…

Why we need it

The various COPs - even those of COP21 in Paris in 2015, and COP26 in 2021 in Glasgow - have mostly been problematic, in that the majority of the pledges made have rarely been implemented in any meaningful way. This is, in part, because they are not legally binding. To a large extent this is down to the relentless lobbying of politicians by those corporations most likely to be impacted by the pledges made by the countries involved in the COP process…

As well as taking action within Britain, it is also vital to make international connections and to co-operate with like-minded organisations across the world. The reach of capitalism is global and so should be our response. Ecosocialists attempt to develop practical solutions at all levels: local, regional, national, continental and global. Ultimately, if we are to mitigate and then end today’s multiple crises across the globe, we need an international ecosocialist coalition of radicals - rather like the Zimmerwald Movement which developed in 1915-16 during the crisis of WW1. The formation of the Global Ecosocialist Network in 2020 - to raise awareness of ecosocialist arguments - was a really useful step in the right direction…

Join us in this vital struggle. Help us to bring together environmental and social justice campaigns with trade union struggles and begin to build a movement capable of winning.

As is increasingly clear to many, with corporations, governments and mainstream parties refusing to put climate protection before capitalist profits, the choice facing us and most of the other species on this heating-up planet is, quite simply: ‘either ecosocialism - or capitalist barbarism and extinction!’ Whilst it is necessary to fight hard for all the reforms, mitigations and policies we can force from governments, ultimately we will have to make a decisive break with the logic of capitalism itself.  As Marx would (probably!) have said if he were alive today:

“People of the world unite, rise up, and ACT!  You have a planet to save!”

The full booklet is available from: Resistance Books

Allan Todd is a climate and anti-fascist activist, and a member of Left Unity’s National Council and of Anti-Capitalist Resistance. He is the author of Revolutions 1789-1917 (CUP) and Trotsky: The Passionate Revolutionary (Pen & Sword). His next book is Che Guevara: The Romantic Revolutionary.

Posted by Mike Shaughnessy at 07:23