Britain’s model of monarchy can never be green 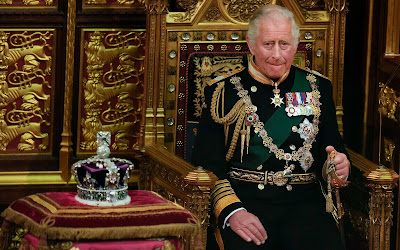 People speculating about whether Charles III will continue his apparent soft spot for the environment into his reign as king are missing the point. The UK’s secretive, massively wealthy, constitutional monarchy, with its huge influence and leadership of an established church, is the opposite of the equality, equity, sharing and openness on which green politics is based.

While it’s true that the monarchy was modernised during the 70-year reign of the late Queen Elizabeth II, most of its power is still beyond public scrutiny. The UK Parliament cannot hold the royal family to account and the Commons Speaker, Lindsay Hoyle, has blocked discussions about them on more than one occasion.

This means that we will never know why Queen Elizabeth II, our constitutional monarch, failed to uphold the constitution when she agreed to Boris Johnson unlawfully proroguing parliament in autumn 2019, when surely her advisers would have spotted the illegality. Similarly, on another major recent constitutional issue, there appears to have been no attempt by the Crown to point out that the Brexit referendum in 2016 was supposed to be advisory rather than a firm commitment.

Meanwhile there is the routine monarch’s job of rubber-stamping even the most damaging of government policies during the state opening of parliament. Stand by for Charles III announcing that ‘his government’ under new Prime Minister Liz Truss will soon be opening up more North Sea oil and gas fields and encouraging fracking across the UK.

Even if Charles’s environmental sentiments might lead him to question the wisdom of such policies, his position as head of the British Establishment means he will publicly support our top-down, hierarchical system however suicidal their actions might be. There is no scope in such a system for exploring the radical changes to our economy, politics and society that are needed if we are to effectively tackle the escalating climate and ecological emergency.

Several media commentators are suggesting that Charles III aims to slim down the monarchy and make it more informal. He might well try, but that doesn’t necessarily mean an increase in openness or democracy, going by the way the Duchy of Cornwall is run.

The Duchy, which is worth more than £1 billion and owns huge large chunks of Cornwall, Dartmoor, Herefordshire, Somerset and almost all of the Isles of Scilly, plus a portfolio of financial investments, has generated millions of pounds a year for Charles and will do so for William, the incoming Prince of Wales. It benefits from a wide range of rights, powers and privileges, including the right to veto legislation that affects it, public immunity (including from Freedom of Information requests), exemption from leasehold rights, exemption from prosecution under several laws and  “Bona Vacantia” (which means where property within Cornwall becomes ownerless, it belongs to the Duke of Cornwall instead of the government).

Some of these rights, powers and privileges are historic but many have been introduced or updated in recent times. Several locals have tried to challenge the Duchy, such as the owner of a mine made famous in the Poldark television series. But they are almost always unsuccessful and hushed up.

The Green Party has for many years called for the UK to introduce proportional representation to provide a fairer number of green MPs in parliament. However, this won’t lead to more open, accountable governance unless we also tackle the unelected, embedded power of Britain’s constitutional monarchy.

The widespread public mourning of the death of Queen Elizabeth II and (mostly) warm welcome for the new King Charles III and William as Prince of Wales demonstrate that the UK is not about to become a republic any time soon. However, there could be an opportunity to build a case for adopting a more ceremonial, apolitical status for the royals along the lines of most other European monarchies.

This could be a practical way to help Charles and William implement their public declarations of support for tackling climate change and protecting the environment.

Dee Searle is an ecosocialist activist based in London

Posted by Mike Shaughnessy at 06:15