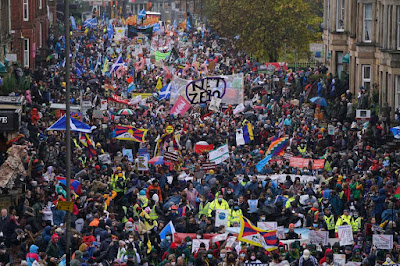 The COP26 Coalition has continued to meet since the Glasgow Summit in November last year, and on 19th February there was a whole day of discussion about the future of the movement. The framing for the discussion was that Glasgow last year was just the start of the network’s activity, and that the work needed to build an effective climate movement on these islands should be continued and enhanced.

There was a tremendous enthusiasm about the action and work that is being undertaken by the Coalition, despite the recognition that the COP26 summit was a failure and did not bring the action on climate change needed from our so-called world leaders. People from all corners of Britain, and the world, including the Caribbean and Africa participated in the COP26 Coalition meetings.

Despite similar attempts of network building by Green Left, however, including its involvement of the Ecosocialist Alliance, there was a noticeable absence in the COP26 Coalition meetings, of anyone involved in Green parties, of either Scotland, or England and Wales. This doesn't necessarily mean that there weren't Green Party members present - but it was difficult to discover the presence of fellow Green Party members.

After a brief introduction to the COP26 Coalition, there were discussions around the difference between organising and mobilising a diversity of tactics, as well as regional exercises to build up COP26 local hubs and the wider climate justice movement.

The day then closed with an online rally for the year ahead, titled 'Movement Building & Collective Strategies', with speakers from Fridays for Future Scotland, Campaign Against Climate Change, Landworkers Alliance, as well as youth activist Aoife Mercedes Rodriguez-Uruchurtu from YouthStrike4Climate Manchester and Breathe.

Each speaker was able to say something quite different to the others, but without disagreement of any kind, which was a sign of the diversity of the COP26 Coalition movement, and arguably, also its strength.

So, what is next for the COP26 Coalition? As the UK holds the presidency of COP26 until the start of COP27, it is still important to keep climate change on the agenda, just as it always has, but especially if we want to see continued action while the UK is in its current global position on it. There is also the matter of building towards COP27, despite it being in Egypt, where post-Arab Spring oppression has been brutal.

The strategy for the COP26 Coalition covers the following areas:

1. Building local capacity by supporting the 'local hubs' to continue to organise locally and to aim to bring other climate campaigns and campaigners together through taking action and the target mapping.

2. Continue to hold events, such as mass gatherings, to build up, and share, useful skills and to learn more from each other e.g., on tactics and other ideas.

3. To continue to put pressure, where possible, on our leaders, for meaningful action on climate justice.

4. To share relevant experience of organising together as the baton for the summit itself is now being passed to Egyptian climate organisers.

While many of us in the Green Party will now be looking to the local elections in May, it might be worth also reaching out to COP26 Coalition groups in our areas, to see how it might be possible to work together for an opportunity to strengthen the climate movement.

The politics of the participants in the meetings of the 19th February feel like a good fit to those that I have already found among Green Left activists (despite being involved for a relatively short amount of time), so there should be no real practical or ideological barriers to connecting our movements more, and I would argue that Green Left is in a fairly unique position to be able to bridge what seems to be a divide between the Green Party of England and Wales, and the broader climate movement, of which the COP26 Coalition is arguably closest to us at the present moment.

Even if our personal capacity is an obstacle to involvement in the run-up to the local elections, let us somehow at least make a resolve now to connect these struggles once the elections are over.

The COP26 Coalition Trade Union Caucus also meets online on the 3rd Tuesday of the month and is well worth being explored by any rank and file trade union organisers.

To find out more about the COP26 Coalition you can visit their website at https://cop26coalition.org/

Skye Pepier is a member of Tower Hamlets Green Party and a Green Left supporter.

Posted by Mike Shaughnessy at 07:25