Citizens’ Assemblies Won’t Save the Planet 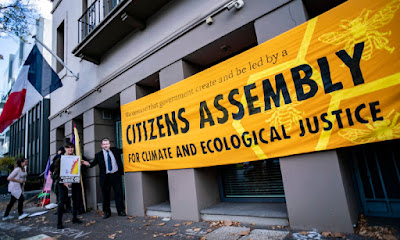 Citizens’ assemblies are receiving increased recognition as a way to ensure greater public participation in shaping government responses to the planetary crisis. The interest reflects a growing perception that the governments of representative democracies are either unwilling to or incapable of implementing the radical measures necessary to decarbonise their economies. Indeed, findings steadily report emissions trajectories in line with the worst-case scenarios set out by the 2015 Paris Agreement. After a year of record-breaking wildfires, droughts, and flooding, the evidence is tangible.

The calls for citizens’ assemblies have come from climate activists and politicians alike. However, as transformative as they may be for decision-making, they are an insufficient fix for the democratic deficits that frustrate confronting the interconnected crises of climate breakdown, ecosystem collapse, and social inequality. To stand a chance of achieving a timely and just post-carbon transition, demands for democratisation must focus on the state and the economy.

What are citizens’ assemblies?

A citizens’ assembly is a group of people brought together to learn about, deliberate, and make recommendations on specific issues or proposals. The assemblies are independent and established through a process of sortition whereby individuals are randomly selected to form mini-publics roughly reflective of the wider population according to various criteria (such as age, race, gender, region, and income).

Their conspicuous presence in the imaginary of contemporary climate politics is largely attributable to the activist group Extinction Rebellion (XR), which identifies going “beyond politics” through the creation of a citizens’ assembly on climate and ecological justice as one of its core demands. The rationale is not without merit, as placing ordinary citizens within decision-making structures can help mitigate against the influence of powerful lobbies, money, short-termism, and professional political ambition on the climate- inert “politics as usual”.

Much emphasis is placed on an initial learning phase made up of expert testimonials and presentations, Q&As, and supplementary resources. XR and the wider climate movement have homed in on this with good reason, given the potential to ensure that the incontrovertible science and gravity of climate breakdown can be communicated to an audience without the distortion of mis- and disinformation.

This learning phase aims to facilitate respectful and factually informed deliberation that incorporates members’ various interests and perspectives. The assembly’s final task is to agree on and present its recommendations for review, uptake, or dismissal.

The Irish case is often cited as an example of how citizens’ assemblies can navigate contentious issues and clear pathways for transformation. Convened in 2016, Ireland’s 99-member citizens’ assembly was tasked with making recommendations on complex constitutional and political problems in five areas: abortion, ageing population, fixed- term parliaments, referendums, and climate change.

The assembly was organised in large part in response to increasing domestic and international pressure related to Ireland’s constitutional amendment on abortion. By granting equal rights to life to the mother and the unborn, Ireland’s Eighth Amendment had banned termination under almost all circumstances for over 30 years. Caught between demands for women’s rights and the “pro-life” social conservativism of a historically dominant Catholic Church, electoral politics had proved incapable of resolving the matter.

Climate change represented another – albeit very different – problem that Irish politicians had long preferred not to address. In failing to come close to emissions reduction targets, Ireland had been labelled one of the EU’s worst performers on climate. The nature of Ireland’s post-economic-crisis recovery made matters worse: from 2011, Ireland’s agricultural and transport sectors were targeted as drivers of economic growth, and emissions grew in parallel.1

Issues of political legitimacy were, and continue to be, exacerbated by Ireland’s economic dependency on carbon-intensive agriculture, as well as the enduring cultural significance of farming in the country.

The decision to institutionalise participation in the Citizens’ Assembly followed the perceived success of the 2012 Constitutional Convention. Indirectly the product of the independent “We the Citizens” initiative, the convention brought elected representatives and citizens together for 18 months to consider changes to Ireland’s constitution. It is best known for its recommendation on marriage equality, which resulted in a historic popular vote in May 2015 to legalise same-sex marriage.

The 2016 assembly was also to have important consequences for social justice: after its members recommended repealing the Eighth Amendment, a landmark national referendum endorsed the decision which marked a triumph for women’s rights and a significant moment of detachment – both real and symbolic – of Irish society from entrenched religious moralism.

Despite these historic advances, both the 2012 convention and the 2016 assembly were constrained in other areas by the same political obstacles they were intended to circumvent. Although the assemblies made clear recommendations on other issues, the government did not act as quickly and decisively as it did on marriage equality and abortion.

Tasked with making proposals on how to make Ireland a leader in tackling climate change, the Citizens’ Assembly proved more ambitious than expected. Its 13 recommendations ranged from steps to support the transition to electric vehicles and prioritise cycling and public transport infrastructure, to emissions taxes on agriculture and an end to state subsidies for peat extraction.

Despite the high level of consensus, the government response was disappointing. A separate parliamentary committee was established to consider the report, with a lack of clarity on the overall uptake of the proposals. Ostensibly, this was due to the difficulty of translating the complex recommendations into the kinds of binary choices suited to referendums.

The level of climate action required to meet international emissions targets will necessarily disrupt the political and economic status quo. Any restrictions the government imposes on a climate assembly in terms of what is put on or kept off its agenda therefore matter a great deal. More than a question of feasibility, whether an assembly’s recommendations are upheld, modified, or altogether ignored comes down to power. It is telling, for instance, that the Irish citizens’ assembly was not mandated to give recommendations on political economy. This dynamic is somewhat at odds with achieving a just transition to a post-carbon economy: unseating the socially and ecologically exploitative capitalist model definitively means putting the status quo on the table.

The 2018 gilets jaunes protests in France demonstrate the risk of taking climate action without simultaneously addressing social justice. This experience offers an important lesson: any green political project with social justice at its core must take a holistic approach to ecological transition. The scale of change demands much more of political and social forces than might be achieved with policy reforms.

No matter how radical an assembly’s recommendations, if it does not or cannot address the institutions that endorse it (and of which it is an extension) then its efficacy is inevitably constrained. The citizens’ assembly finds itself in an irreconcilable bind when it comes to climate: while it depends on state buy-in to wield political influence, to achieve the necessary changes the same state must open itself up to scrutiny, challenge, and transformation.

The crux of the problem lies in the status of the citizens’ assembly as an advisory body. Lacking legislative capabilities, these assemblies are effectively toothless; their influence over decision-making is curtailed by the state, both in terms of its prescribed mandate and uptake of the recommendations. This is not to undervalue the functions these assemblies serve as forums for learning, deliberating, and, ultimately, deepening citizen engagement with the decisions that govern their lives.

These virtues are observable in the ambitious recommendations made by Ireland’s citizens’ assembly, which influenced the government’s 2019 Climate Action Plan. However, while the plan endorses – to varying degrees – some of the measures proposed by the assembly (such as accelerating the uptake of electric vehicles and expanding renewable energy micro- generation), it notably passes over the more redistributive recommendations (in particular, taxes on Ireland’s disproportionate agricultural emissions).2

The outcome questions the capacity for citizens’ assemblies to effectively counter the entrenched structures of political economy that shape the climate question in Ireland as elsewhere.

Focusing on the state

The predicament of state power may be understood through two observations. First, the efficacy of citizens’ assemblies depends on the degree to which governments buy into them as a transformative process. This has significant implications throughout, from what is on the agenda to how the issues are framed to the uptake of recommendations.

And second, despite their perceived autonomy, citizens’ assemblies may be used strategically by those in positions of power to distance themselves from difficult decisions or to pacify discontent without committing to real change. Rather than offering a solution to the democratic deficit, citizens’ assemblies may thus offer an alibi to governments that wish to appear to democratise climate action but are in fact reluctant to take meaningful steps.

Nation-states hold the power to drive radical decarbonisation, but currently, this change is nowhere in sight. The state must itself first transform to facilitate greater public scrutiny of and control over the economy and its post-carbon transition. Any project of democratisation presupposes a certain decentralisation to subordinate political authority and shape the economy according to the needs of individuals and communities. This is more likely to come as a result of pressure from large-scale social mobilisation than advisory deliberative forums.

In this sense, rather than positioning themselves as “beyond politics”, eco-social movements would be better advised to focus on the necessarily messy occupation of enlarging politics. That means breaking down the institutional and ideological divides which keep capitalism beyond the reach of democratic control, and building support both within and outside of the state (though always with the goal of its ultimate transformation).

Rather than shying away from politics, what is needed is an effective, persuasive alternative to exploitative and growth-centred neoliberal politics.

While citizens’ assemblies represent a form of participatory capacity building which should not be underestimated, so long as they are not established to transform the logic of the state, their potential will remain limited. Ireland’s citizens’ assembly shows that an informed public would savour the opportunity to instigate real change. Despite their shortcomings as an instrument of democratic reform, they offer an instructive lesson for framing the political struggle of tackling the climate crisis.

The high levels of respectful deliberation and informed collective decision-making observed in citizens’ assemblies speak to the importance of (approximate) equality as a precondition for effective participation.3 Regardless of factors such as race, gender, or class, all members are equally valued and given an equal opportunity to listen, speak, and participate.

They have equal access to information, educational resources, and opportunities to interrogate experts. Every interest or opinion is considered. These are the necessary conditions for a fair and functioning participatory democracy, and they should inform the strategic objectives of any eco-social alternative.

The fight for a climate response must therefore prioritise the redistribution of income and wealth. Key utilities and public services as well as extractive, polluting, and carbon-intensive industries should be targeted for democratic control in order to secure equitable provision and accelerate transition.

This means demanding political decentralisation and economic re-localisation to empower communities to build their own versions of a just transition while diminishing their dependency on economic centres. Once this level of agency is achieved, local contexts represent the best opportunity for forums such as citizens’ assemblies, citizens’ juries, and participatory budgeting.

This could help counter the alienating elements of representative politics and address the democratic deficit by opening up political and economic institutions to effective participation.

First and foremost, this means building an intersectional movement committed to non-violent struggle against all forms of exploitation and inequality. It must be prepared to fight within and beyond the state.

In this age of protest and pandemic, as injustices are increasingly laid bare, the opportunity to make inter-movement alliances should not be missed. Integral to that process is learning the lessons of respectful deliberation as the basis for effective collective action that addresses the root causes of the planetary crisis.

Posted by Mike Shaughnessy at 07:11