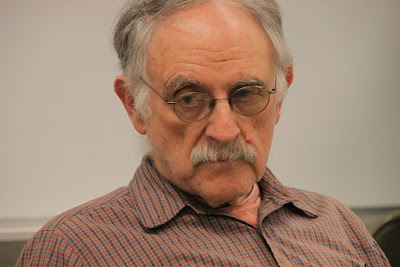 Three years ago today, Joel Kovel, passed away. Some have said that he was as important to ecosocialism as Karl Marx was to socialism. This is a repost of what I wrote at the time, after hearing of his death.

Joel Kovel died in New York City on 30 April 2018 at the age of 81. A radical psychiatrist, academic, writer and political activist, he will be best remembered as one of the most influential ecosocialist thinkers of modern times. In 2001 he co-wrote, with Michel Lowy, the first ecosocialist manifesto, a call for an end to the destructive capitalist system and demand it is replaced with ecosocialism, before capitalism completely destroys the planet.

His book The Enemy of Nature first published in 2002, and updated in a second edition in 2007, is a must read for socialists, greens and anyone concerned with environmental degradation. It was this book in particular that brought Joel to my attention in 2004. It is simply brilliant in its line of reasoning, placing the blame for our ecological ills firmly at the door of the dominant world system of endless growth, capitalism.

I had always considered myself to be a socialist, but by the early 2000's I was also becoming increasingly alarmed by environmental problems, especially climate change. Kovel blends a critique of capitalism with both a red and green angle, in the most compelling way I have yet come across. This, despite much fine thinking and writing on the matter, before and since.

Kovel edited the pioneering ecosocialist magazine, Capitalism Nature Socialism, where he worked with another leading ecosocialist from 1980's, James O'Connor. He wrote other books including White Racism, Red Hunting in the Promised Land and Overcoming Zionism.

One stand out thing from The Enemy of Nature is Kovel's use of the term 'usufruct' which Karl Marx had theorised about in the third volume of Capital. The word is from the Latin, and goes back as least as far as the Roman Empire, and is part of many countries law. It refers to the legal right to use and derive benefit from property that belongs to another person, as long as the property is not damaged.

Kovel highlights Marx's use of the word when he quotes that "human beings are no more than the planet’s usufructaries, and, like boni patres familias, they must hand it down to succeeding generations in an improved condition.” Kovel said in an eco-socialist society, “everyone will have... rights of use and ownership over those means of production necessary to express the creativity of human nature.”

He was an unsuccessful candidate for the US Senate in 1998 from New York and ran again unsuccessfully for the US Green Party presidential nomination in 2000, when he lost out to Ralph Nader. He commented that if he had a dollar for every Green Party member who told him they liked his ideas, but he should drop the socialist tag, he would have been a very rich man. He thought Nader was a populist with no real understanding of ecological matters.

He fell out with Murray Bookchin, the anarchist founder of Social Ecology, though I don't know why, since their ideas were very similar, which was a pity. But they were certainly equals in terms of developing the thinking that links ecological and social exploitation with the capitalist world system. To my mind social ecology and ecosocialism are pretty much the same ideology.

I had the pleasure of meeting Joel when he came to London in 2007 to speak at the London School of Economics, to promote the release of the second edition of The Enemy of Nature and to talk about ecosocialism generally. I was in small group that went to the pub with him afterwards, and he was charming and interesting in equal measure. I did hear that Kovel was planning another visit to London, but I guess he was not well enough to make the journey in the end.

Despite the looming ecological crisis and 'force-field' to use his expression, of global capitalism he remained hopeful, cheerful even, about the prospect of ending capital's rule over humanity. In the afterword to The Enemy of Nature, Kovel writes that when he was asked why he didn't despair about the ecological crisis and all powerful capital, "I do not despair; for whatever reason, I actually find myself in good spirits as I studied the crisis further and devised the ideas that have gone into this work."

Kovel believed that if his logic was wrong, and capitalism managed to reform itself into a truly eco-friendly system, then fine, all will be well. But if he was right, at least his line of reasoning offered hope of overcoming the system and crisis. This perception, Kovel suggested was liberating in itself, and can help us "to meet it actively instead of passively submitting to the terms of understanding dealt out by the dominant system."

I think that kind of sums up Joel’s legacy, as a giant of ecosocialist thinking who will be sorely missed.

Posted by Mike Shaughnessy at 07:55