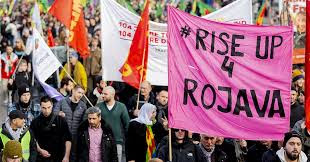 1. What is RiseUp4Rojava about?

The goal of the campaign is to create an internationalist front against Turkish fascism and to defend the revolution of North-East Syria, widely known as Rojava, with the pillars of women’s liberation, radical democracy and social ecology. Therefore, different organisations from different countries have come together under a common platform for almost two years now to defend Rojava’s achievements, making the revolution their own.

We are different organizations with different views and perspectives on different topics, but we have decided to come together under the umbrella of riseup4rojava by the principals of building an anti-fascist, anti-capitalist and anti-imperialist alliance in solidarity with the revolutionary struggle in Kurdistan against Turkish fascism. The differences between all the organisations as part of the campaign are not something that is in the way of our work together, but something that will push everyone further.

As organisations, groups, and individuals that are not directly part of the campaign, we come to you to present to you the upcoming Spring Offensive; but let us provide a bit more background first.

2. How has the campaign started and what are recent developments?

Our campaign started about one and a half years ago. On 25th April 2019, the day of liberation from fascism in Italy, we presented the campaign for the first time in many Italian cities, and on 1st May 2019, the campaign was present at many demonstrations in several countries.

The campaign achieved a lot. Through our global resistance and with hundreds of actions in many countries in the form of demonstrations, blockades, occupations, information events, seminars all around the globe, we together forced countries to position themselves regarding the crimes committed by the Turkish fascist state, leading to some countries suspending arms exports to the fascist regime in Ankara. At the same time, by working together, we also contributed to spreading the hope and the practical alternative Rojava shows and fights for daily.

We have shown this together in the last year, for example, in more than 250 actions overall in over 30 countries during the action weekend around 19th July, the anniversary of the Rojava revolution, and during the action week which started on 1stNovember, World Kobanê Day – which commemorates that on 1st November 2014, millions of people were on the streets worldwide to express their solidarity with the heroic resistance of Kobanê against the so-called Islamic State, and as a result, a global movement of solidarity, resistance and common struggle has grown – that the Rojava revolution is our common revolution.

Together with the local structures in Rojava/Northeast Syria, as well as with the Kurdish umbrella organisations in Europe and, among others, with the campaigns Women Defend Rojava, the Internationalist Commune of Rojava, Make Rojava Green Again we have shown and we are dedicated that the achievements of the revolution must be defended and that the continuation and intensification of the war must not be accepted in silence, but must also be prevented by all means.

The war on Rojava has never stopped and the enemies of the revolution – above all the fascist Turkish state – are in constant preparation for the next major invasion into Rojava, also by attempting to further occupy other parts of Kurdistan and by attacking the democratic forces that are resisting this.

Recently, on 10th February, the Turkish fascist state launched a new invasion to occupy new parts of Southern Kurdistan – with the aim to install a buffer zone between South- and North-Kurdistan, and launching a new offensive onto Rojava – by attacking the Garê-region, which is part of the guerrilla controlled Medya Defense Zones, which ended in a devastating defeat for the Turkish army already on 14th February due to the heroic resistance of the guerrilla forces.

The attack against Garê needs to be understood by everybody as an attack against the whole revolution and against all of us, which aimed at the heart of the revolution and the anti-fascist resistance in the region. The guerrilla’s resistance in Garê was a historic victory, but the Turkish fascist state is forced to launch a next big attack with operations against the Medya defense areas, Şengal, Maxmur, and Rojava still being on the agenda. That is why we must continue the resistance against Turkish fascism and against the occupation with all our strength regionally and internationally.

After all, the attacks against the revolution by the fascist Turkish state are only possible because of military, diplomatic, economic, political, technological cooperation of the opportunist imperialist governments, especially of the USA, Western European, and other states, which is why a spring offensive with the aim of strengthening the antifascist struggle globally against fascist rule, capitalist exploitation and imperialist devastation of our livelihoods is so important in our internationalist struggles.

3. Spring Offensive in Solidarity with the Revolution and the Anti-fascist Resistance in Kurdistan from 13th March to 8th May

As RiseUp4Rojava, we call for a Spring Offensive in the time from 13th March to 8th May to take a clear stance against Turkish fascism, in solidarity with the revolutionary forces in Kurdistan and to directly fight against the international collaborators of Turkish fascism. Besides this, we want to highlight the struggles that unite and move us globally. Our slogan is “Unite in Resistance – Dem Dema Azadi ye (The Time for Freedom is Now)”.

As part of the Spring Offensive, and to unite in our continuing resistance against Turkish fascism with all our strength, we also call to take action for the freedom of Abdullah Öcalan, and all political prisoners, which includes also the practical show of solidarity with hunger strikers (see for example, the connection between Dimitris Koufontinas and the hunger strikers in Turkish prisons). Crucially, the revolution in Kurdistan is a women’s and ecological revolution. Apart from highlighting the femicidal politics of Turkish Fascism, and taking action to smash patriarchy, we also call upon the international ecological movement to practically show the necessity to be antifascist and anti-capitalist.

Moreover, the martyrs who have sacrificed their lives for this revolution to survive have not died; they live on in our hearts and show us the way. Let us internationally commemorate together the fallen ones of the struggle for freedom and dignity. After all, the Kurdish people do not stand alone, but our international solidarity shows that the revolution in Kurdistan is a source of hope and inspiration for the oppressed and the united antifascist struggle worldwide.

With the RiseUp4Rojava action line to "Disturb. Block. Occupy." we will protest, demonstrate, discuss, and we will directly go against arms companies, the tourism sector benefitting the fascist Turkish state, governments and financial institutions, and we’ll put them under pressure!

At the same time, there will be large scale events at some of the main dates (see below), ranging from demonstrations, rallies, assemblies, and conferences. Take part in the planned actions or become active yourself. Every action counts! Whether information events; webinars; seminars; reading groups; banner, billboard, graffiti, letter and poster actions; demonstrations; blockades of weapon companies; or a flashmob in front of a government building or in a bank. There is a lot that can be done.

If you announce your action in advance, please send us the information by mail: riseup4rojava@riseup.net

The HASHTAGs for the action week are:

- 21-28 March.: Week of Our Heros (commemorating and remembering martyrs)

Please also make your own flyers and posters, following the concept here, and send it to us, so that we can upload it onto our website for material accessible to everyone.

We understand the campaign RiseUp4Rojava as a chance and an opportunity to come together as anti-fascists, anti-capitalists and anti-imperialists internationally. On the one hand, to express our solidarity with the revolution in Rojava, the struggle of the revolutionary people in Kurdistan and the Middle East, and on the other hand, to strengthen our alliance internationally, to oppose Turkish fascism and fascism worldwide. For that reason, we will continue to organize, mobilize and take action.

The Spring Offensive, concluding with the Antifascist Action Day, will be an important part of that and for that reason we invite you to join the planned actions and events, and if possible to organise and get active for this by yourselves. This is important given that the war in Rojava and in all of Kurdistan is ongoing, and a new/continued invasion on Rojava by the fascist Turkish army and their mercenaries is a constant threat.

While we write these lines, the local forces and population in Rojava/North-East Syria show everyday resistance against the war at the frontlines in Ain Issa, in Til Temir as well as in the occupied areas from Afrin to Girê Spî and Serêkaniyê, knowing and showing that without this resistance the continuous build up of the revolution will not be possible. Turkish fascism will be smashed on two frontlines, one in Kurdistan, the other one internationally. The revolution in Rojava and Kurdistan will be defended on two frontlines, one in Rojava and Kurdistan, the other one internationally.

With revolutionary greetings and respect,

Posted by Mike Shaughnessy at 12:24