Ecosocialism - Is the State Necessary? 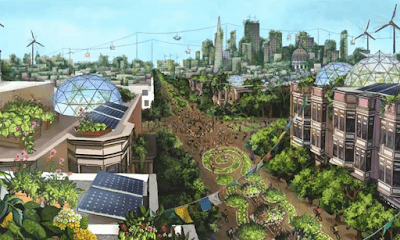 There are many strains of ecosocialism, and those who call themselves ecosocialists, from broadly social democratic traditional type electoral political parties, through to anarcho-communist types who reject bourgeois electoral politics, and many in between. All though, tend to see some kind of role for the state in facilitating the move to an ecosocialist society, at the very least.

At the social democratic end of the spectrum, the state is seen as essential to implementing environmental protection laws and initiatives like the Green New Deal, which is gaining ground in the US and UK in these circles. For these type of ecosocialists the state introducing such policies, is largely seen as an end in itself.

At the more radical end of the spectrum, and I count myself in this, these type of policies are seen as an emergency measure, to tackle the ecological crisis, but also as means of moving on politics to replace existing power structures, which will lead to a true ecosocialist society in the longer run.

The Green New Deal, for example, can be viewed as an extension of the capitalist system's imperative for economic growth, and indeed to save the system from itself. I hail from the Joel Kovel / Michel Lowy strain of ecosocialism, which far from wanting to preserve capitalism, wants to see it replaced altogether. For people like me, logic directs that economic growth is the very cause of our ecological ills, and needs to be abandoned if we are to solve the crisis. It means the end of capitalism, or the end of the world.

However, ending capitalism isn’t necessarily the same thing as abolishing the state, although under the current status quo, the state is so entwined with the economic system, and so a radically different state would be required. We have seen the problems with the state under twentieth century socialism, which was authoritarian and undemocratic, and which ultimately led to the demise of these regimes.

But even so, I have always been of the view that some state or centralised apparatus would need to be put in place to direct the shift to a more ecologically rational and egalitarian society. This should be minimalist, and crucially temporary, where the state aims to dissolve itself in favour of localised direct democracy, once the direction has been set in place.

I’ve recently been reading Murray Bookchin’s book ‘The Next Revolution,’ published in 2015. Bookchin’s political thinking went through a number of re-thinks, beginning as a Marxist but moving to a more anarchist view, and largely developed the theory of Social Ecology, which is similar in many ways to the version of ecosocialism that I adhere to.

A crucial difference in Bookchin’s view to that of most ecosocialists, is his rejection of the state having any, even a minimalist and temporary role to play in a future ecologically rational and truly democratic society. As he wryly observes, ‘when has a state ever dissolved itself?’ This is an important question.


There is always a tendency when individuals get into powerful positions, to cling on to their privileges and indeed to extend them. It doesn’t seem impossible to me though, for some kind of time limitation to be put onto any state or centralised bodies, if the will is there to do this. But Bookchin has another idea.

Libertarian municipalism proposes a radically different form of economy-one that is neither nationalised nor collectivized according to syndicalist precepts. It proposes that land and enterprises be placed increasingly in the custody of the community-more precisely, the custody of citizens in free assemblies and their deputies in confederal councils.

In such a municipal economy-confederal, interdependent, and rational by ecological, not simply technological, standards-we would expect that the special interests that divide people today into workers, professionals, managers and the like would be melded into a general interest in which people see themselves as citizens guided strictly by the needs of their community and region rather than by personal proclivities and vocational concerns.

Here, citizenship would come into its own, and rational as well as ecological interpretations of the public good would supplant class and hierarchical interests.

Perhaps this would be the case, but will the required coordinated action needed to transform our political economy be achieved quickly enough and uniformly? Maybe such a confederation of municipals could do this but I have my doubts. One possible advantage could be that if this model started to take hold is that it could be the starting point for the changes we need, in other words, have revolutionary potential. A pre-figuration of a future good society?

In the UK existing local government has little power and even less money in these austerity times, so is not an ideal starting point, but small signs have emerged. Hundreds of local authorities have declared ‘climate emergencies’ but do not have the power to resolve the situation in anything other than a piecemeal way. Could the people force a transfer of power to the local? Past attempts have ended in failure, notably Liverpool City Council in the 1980's, but given the climate emergency now, might they succeed?

Bookchin is certainly right to highlight the dangers of statist regimes, and his writing is food for thought in developing ecosocialist thinking, on how to achieve our vision of a fair and ecologically sound society. Time is short too, the fightback needs to begin soon.

Posted by Mike Shaughnessy at 07:03