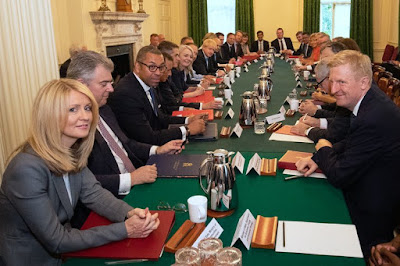 Although I think it fair to say that you can never be sure that new UK prime minister, Boris Johnson, means what he says, all of the signals coming out of the new regime point to the most extreme right wing government in modern times has been formed. The make-up of Johnson’s Cabinet, for instance, containing many characters who were on the far right fringe of Tory party only a few years ago, should set off alarm bells amongst all in the broad UK left.


This is not just about Brexit either, although that is a part of the general direction of the Tory government, a first step in the move to deregulate employment and environmental standards and reduce human rights protections in the UK.

Logic suggests that is the only way that the UK can move to attract investment and growth in the economy, from a right wing perspective. A kind of super-sized Singapore on the edge of Europe, under cutting European Union (EU) standards, so as to be able to compete in our newly isolated position.

To those on the left who do support Brexit, and I know that many relish the idea of the EU being out of the way, so that full on clash with the Tories becomes inevitable, I say you are playing a dangerous game. What if the Tories win this battle, using simplistic racist messages and encouraging delusions of the long gone days of Empire - the country could become a very nasty place indeed.

Whether you support Brexit or not, a campaign against the Tories vision of the future needs to be started now, and it should be of the broadest left if we are to be successful, whatever reservations we have in general about the more centrist elements of this broad alliance. I should add that I’m not suggesting an electoral alliance of some sort here, although that will probably be a part of it, but we need to mobilise civic society as well, outside of electoral politics.

It may well be, that this will be largely a campaign in England and Wales, with the Scots having a possible escape hatch in seeking independence, but I see no reason why this cannot dove-tail with resistance south of the border. Indeed the possible loss of Scotland should add weight to the need to defeat these extreme Tories across the UK. We can choose to meekly accept our fate, or we can fight this government tooth and nail, for a future worth living. I know what I will do.

It is highly likely that there will be general election soon, perhaps as early as the autumn, as Johnson aims to capitalise on the ‘honey moon’ period that all new prime ministers get. Conversely, it may be forced on the government if they pursue a hard no deal Brexit, with probably enough ‘liberal’ Tory MPs prepared to support a no confidence vote in the government, which almost certainly will lead to a general election. It is possible that some cooperation will happen between anti-Tory parties, but this may not be enough on its own

For those who are anti-Brexit, they should support the anti-Brexit demonstration on Saturday 12 October in London and other places around the country. I see no reason why those who are pro-Brexit, but anti-Tory, should not organise their own demonstrations against the government. It needs to be spelt out what this Tory government has install for the country. Demonstrations like this have a limited effect, but are valuable in giving the feeling to protesters that they are not alone, and can boost confidence that success is possible.

I think the template here should be the anti-poll tax campaign of 1990, which not only stopped the policy itself, but also brought down the once all-powerful prime minister ,Margaret Thatcher. These type of campaigns are best if a simple single issue is the focus, and I would suggest that in this case it should be the future of the NHS. We know that any post Brexit trade deal with the US, will have to include the opening up of the NHS to US private health care corporations. We really don’t have much more to offer the US, so this is a highly likely scenario.

In the anti-poll tax campaign, there were different strands of people against the poll tax. Those who rioted in Trafalgar Square, those who refused or in some way avoided paying the tax, and those, mainly Tory voters in northern England who stood to pay much more tax under the policy. There was stiff resistance in Scotland too, which piloted the new tax. Hence the need for a broad based campaign. We need to re-create something along these lines.

If we can manage this, we have a good chance of success. We have to try, not doing so is unthinkable.
Posted by Mike Shaughnessy at 07:51