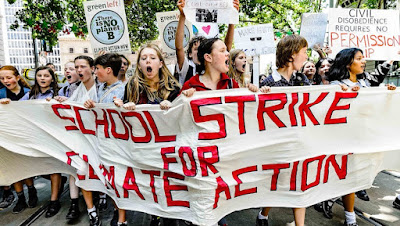 Written by Jonathan Neale and first published at The Ecologist

I loved the school students’ climate strikes last month. The energy, the jokes on the placards, the smiles, the hopeful faces. The students in Brighton marching by the railway station, chanting ‘F*** Theresa May’. I had all those kindly, patronizing, adulty feelings. But something deeper too.

I have been a climate activist since 2004: endless protests and phone calls and emails and meetings in small rooms, week after week, year after year, all the time trying to give other people hope. When I spoke at meetings people would ask – But how can we do it? How can we force the powerful the act? In every country, on every continent, someone always asks that question. Because everyone wants to know the answer.

I would try to invent an answer, and then lie alone in the dark in the middle of the night and wrestle with despair. But now I have seen a power that can change the world.

If young people all over the world come out of school and stay out of school, the cities will stop. The workplaces will stop, because so many people need to go look after their children.

The young people would have immense moral force. They can occupy the parliaments. The police will not and cannot beat and gas and kill all the children. Nor will the soldiers. Nor would we let them. And if it is all over the world, it will be a power such as Earth has never seen.

The kids could make the rest of us brave and decent, and we could follow them out of work into the squares and the halls of power until we win.

We are not anywhere near that now. These are one-day strikes. Who knows how long the strikes will last? How far they will spread? What exactly do they want?

I fantasize we will go all the way this time. I know we won’t. Great historical movements do not work like that. But the process has begun.

What I can now imagine, many can now imagine. It will be possible for millions to begin working out how to use their power, with apocalypse in their future and a lifetime of making history ahead of them.

I have seen another thing. For forever I have had to listen to experts telling me we would never be able to convince people by scaring them shitless about climate change. They told me, and you, how people were too short sighted and greedy and stupid and unwashed to grasp what the enlightened understood.

Now I know that we climate activists have persuaded hundreds of millions. The first part of our work is done. The real work commences.

Another thing is so big people hardly comment on it. The internationalism. The strikes started with one young woman in Stockholm, spread to Australia, back to Belgium, on across parts of Europe, even came to Britain, are going to be global this Friday, and will not stop there.

As I watched the strike reports, Nancy Lindisfarne and I were finishing a book on class and male violence. The last chapters - a joy to write - were about the exploding resistance to rape and sexual harassment.

Tracing the history of the last few years, the same thing jumped out at us – internationalism. The movement leaps, from the riot against rape at India Gate in Delhi in 2012, to Rhodes University in South Africa, to Buenos Aries and across Latin America, to the women’s marches against Trump, to the MeToo movement in the US, to the Chinese MeToo and the Indian MeToo, to Stormy Daniels and Blasey Ford, just two women, to hundreds of thousands protesting for legal abortion in Argentina, to the conviction of Cardinal Pell in Australia, to three million women in Kerala joining hands to defend the dignity of their menstrual blood, to demonstrations of millions around the world on International Women’s Day last week.

These movements are only the beginning, and the earthquakes will threaten all established power.

You can see that same internationalism - the leapfrogging power of example and shared messages - moving as quickly in the climate strikes. It’s partly social media, and partly that our experience is growing more alike across the world. It’s partly migration and Skype.

There is one imbalance. Everyone sees what happens in the US, but people in the US have trouble seeing anything in the rest of the world. That sucks. Let’s change it.

The movement and the internationalism are a property of our age. It is the same this week in the great crowds and strikes against the tyrants in Sudan, Morocco and Algeria. That is how it was in the Arab Spring eight years ago too, which spread throughout the Arab world and south to the rest of Africa, to Greece and Spain and to Occupy in the US. That Spring, like MeToo, like the climate strikes, was a movement of the young.

The young are changing, which means the world will change.

Internationalism matters right now. The solution to climate change must be global, because the atmosphere we breathe is global.

Our movement has tried for global agreement at the top, between the existing governments, tried long and hard, and failed utterly. That’s why we know that we need mass movements from the grassroots, pushing upwards. But those movements have to spread from country to country, each encouraging the others, because in the end we have to win this globally.

Internationalism matters too, because this is the age of The Walls. Trump’s wall, Netanyahu’s wall, the migrant-hating spreading across Europe, the drowning pool of the Med, the xenophobia in South Africa, hating Muslims in India, hating Roma in Hungary, and Brexit.

Internationalism matters in Britain this week because the politicians are leading us into a racist Brexit. Many on the left are tailgating the racist right. They say it would be wrong to have another referendum, because the majority would vote to remain. They say we have to leave because we can only change the world by ourselves, on our own, in our little island. That is a mistake about how we can change the world.

Internationalism matters now because in the lifetime of the today’s climate strikers, heat and its consequences will drive hundreds of millions from their homes. One solution will be the Walls around the World.

We will be climbing these walls, clambering out of the sea, our children in our arms, begging the men and women with the guns to let us through. Or we will be the ones standing on the Wall, gassing the refugees, shooting them, shoving them back into the sea or the desert or the barbed wire.

But the children of Earth are showing us another way. Internationalism makes it possible to learn to welcome the needy because they are our brothers and sisters, and because we can only change the world together.

Jonathan Neale is a writer and was secretary of the Campaign Against Climate Change for several years. He is the editor of One Million Climate Jobs, and blogs with Nancy Lindisfarne at Anne Bonny Pirate.

Watch some of the 5,000 youth that marched in London, England on Friday
Posted by Mike Shaughnessy at 10:26