The Solidarity Movement with Rojava is a Global Movement 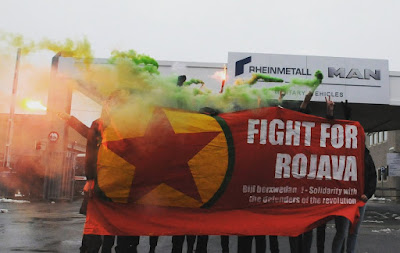 Press release on the global action days on 27 and 28 January from the Internationalist Commune of Rojava from Qamislo / North Syria.


In more than 55 cities, in more than 20 countries, thousands of people have taken to the streets in recent days. The Global Action Days on 27 & 28 January, in defense of the revolution in Rojava against the Erdogan regime in Turkey, have once again shown that the Solidarity movement has become a global movement.

The list of cities is long. It ranges from Sydney in Australia, Moscow, Helsinki, Stockholm, London, Berlin and Munich, to Los Angeles and New York. In all these cities there have been demonstrations, rallies, film continuations and information events in the past few days. The Internationalist Commune of Rojava had called for global days of action for the 27th and 28th of January to defend the revolution in Rojava, northeastern Syria. Many organizations and individuals joined the call and action has been taken in more than 20 countries. Also different personalities participated in the actions. For example th Journalist and feminist Gloria Steinem spoke at the rally in New York City, emphasizing her solidarity with Rojava. 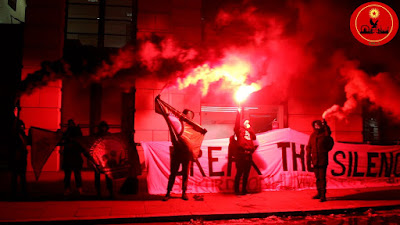 The focus of the days was the support of western states and companies of the fascist Erdogan regime in Turkey. Turkey has been waging war against the Kurdish movement in Turkey for decades, but also against the Democratic Federation in Rojava / northeastern Syria. Only a year ago, with the military support of Western states such as England, Italy and Germany, Turkey had occupied the canton of Afrin of the Democratic Self-Government of Northeastern Syria.

"Because the war of the Turkish state on Democratic Autonomy in Rojava in Syria would not be possible without the military support, we are currently protesting against these companies which export arms to Turkey," says Sara Andre of the Internationalist Commune of Rojava, which call for this Global Days of Actions. Because of the massive support with heavy weapons, and technology from many European companies, during the days of action it came in various countries to protests against weapons industry.

In Munich, actions took place at Krauss-Maffei Wegmann GmbH & Co. KG and Daimler AG. In Sweden, activists protested at several SAAB locations and protest took place in front of BAE in London. In Austria, activists spontaneously held a demonstration on the grounds of Rheinmetall and also in Flensburg Germany, protest happened in front of the site of Rheinmetall. In Unterlüß, one of the largest sites of Rheinmetall in Germany, activists had blocked the access roads to the company during the night. The activists wrote: "On several access roads we have built roadblocks with the help of construction site closures. This blocked the access to Unterlüß to delay the construction of weapons", an activist said. 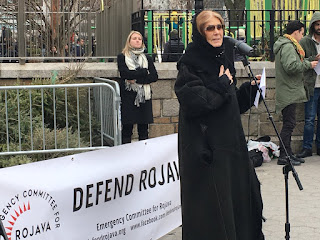 "It is precisely these companies that benefit from the Turkish war in Syria, but also in Iraq," adds Ulrike Martin of Make Rojava Green Again, who also took part in the action days. "Among others, it was the tanks from Germany, trucks from Sweden and helicopters from Italy, which make the wars of Turkey possible."

The Internationalist Commune of Rojava evaluates the action days as a great success. These days have made clear, that the solidarity movement with the Rojava revolution has become a global movement for democracy and peace in the Middle East, especially Syria. "But let us not forget that the initiator of this social uprising in Rojava, Abdullah Öcalan, has been imprisoned in Turkey since 1999," says Sara Andre. Currently, indefinite hunger strikes by over 200 political prisoners in Turkey for lifting the solitary confinement of Öcalan. The HDP politician and activist Leyla Güven is in her hunger strike since the 7th of November last year. "Defending the revolution in Rojava also means breaking the isolation of Öcalan," Sara Andre continues.

Even though the days of action are over now, the protests against the fascist regime of the AKP and MHP under Erdogan will continue. Activists from Sweden, England and Germany have widely announced the continuation of their campaigns against arms exports. 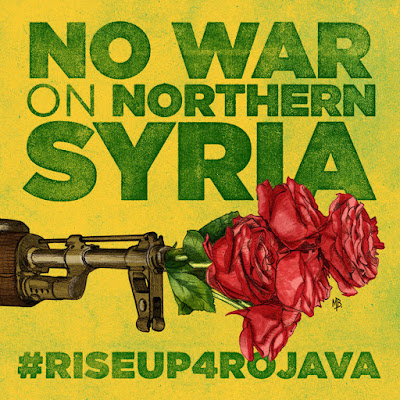