Why is May Taking a Risk with Core Tory Voters? 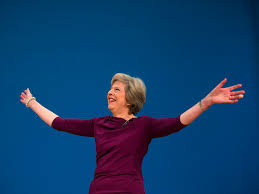 The Conservative Party general election manifesto was finally launched on Thursday, in Halifax in Yorkshire, a Labour held marginal constituency, and included some quite un-Tory like policies. At face value the manifesto is a departure from something like 40 years of Tory ideological dogma.

Take this passage from the manifesto: “We do not believe in untrammelled free markets. We reject the cult of selfish individualism. We abhor social division, injustice, unfairness and inequality. We see rigid dogmas not just as needless but dangerous.”

This runs counter to everything the Tories have stood for since Margaret Thatcher became their leader in 1975. The ideology was fuelled by the thinking of neo-liberal economists like Milton Freedman and Friedrich Hayek and became known as the Chicago School of Economics (emanating in the main from the University of Chicago).

The essence of the ideology was that the nation state was bureaucratic and inefficient in supplying public services and in the process held back private businesses from being efficient (making big profits) with regulations on employment and much else. It was also said to discourage entrepreneurial activity by individuals, by taxing higher incomes and profitable businesses.

The solution offered was to reduce the size the state by privatising public services, closing down nationalised industries that were not profitable and to deregulate the economy to free up businesses to get on with money making. Along the way, trade unions would need to be weakened, if not crushed completely, as they were seen as holding back this process.

The first experiment of the theory in a real economy began in 1973 when Salvador Allende’s democratically elected socialist government in Chile, was violently overthrown by army General Pinochet’s coup, with help from America’s CIA. Many socialists and trade union activists were murdered in the process, and the economy was set on a neo-liberal pathway.

Thatcher became Tory Prime Minister in 1979, and set about transforming the British political and economic orthodoxy which had stood since the end of World War 2. By the 1990s the Labour Party and the Liberal Democrats had also adopted this neo-liberal ideology, but sought to smooth off some of the rough edges.

May is not advocating renationalising public services, or raising taxes on wealthy individuals and big businesses and there will be further curbs on trade unions taking industrial action. But if her rhetoric is to be believed, and there must be some doubt as to whether actual actions will amount to much of a change in practice, it will be news to many Tory supporters that they do not believe in ‘untrammelled free markets.’

May’s policies on immigration are not popular with the business community either, with the aim of reducing net immigration to ‘tens of thousands’ which I take to mean less than 100,000 net immigrants per year. Even her own ministers have said that this is unlikely to be met, and immigration may need to increase once we leave the European Union and freedom of movement ends. The economy would likely collapse for lack of workers.

This is compounded by the policy of charging businesses £2,000 per immigrant worker that they employ, which has received at best a lukewarm reception from business organisations. Normally, most business leaders are rock solid Tory supporters, so she is taking a risk here too.

Then there is May’s apparent change of demographic electoral tactics that are her policies towards older, retired voters. The means testing of pensioners winter allowance, and therefore the taking of this money off the vast majority of pensioners, for example.

The reduction of the so-called "triple lock" on pensions to a "double lock" with the state pension to rise by the higher of average earnings or inflation - but to no longer go up by 2.5% if they are both lower than that, will also make pensioners poorer.

But perhaps the riskiest policy of all is the proposal for how adult social care should be paid for. This is a huge problem in the UK, and certainly needs addressing, but forcing people to use the value of their properties to pay for care, is very un-Tory like.

Ever since Thatcher sold off the best of the public housing stock at knock down prices, house price rises and ownership has been central to economic strategy. Rising prices, achieved by restricting supply, particularly of affordable public housing, and so forcing up the price of housing, for sale or rent, has been the major driver of economic growth in the UK.

Property ownership is now expected to provide a pension for many people, and with these latest proposals it is to be expected to pay for health care as well, if necessary.

One of the few ways for younger people to have a chance of purchasing a property these days, is to get a parental loan, often raised against the value of the family home, or of inheriting the family home when their parents die. If this money is to be used (all but £100,000 of it) to pay for care, then this closes off an opportunity for young people too, or at least those lucky enough to have property owning parents.

This policy on its own, has the potential to be very unpopular with older voters, a demographic that tends to vote Tory in large numbers and are reliable at turning out to vote. It could cost the Tories the election.

A big risk, which May doesn’t need to take really, but she seems to be high on hubris, which for most Prime Ministers takes a few years, and more than one election victory. May has been Prime Minister for less than a year, won no elections and she already has delusions of grandeur.


This could well backfire on May, this election may not be the foregone conclusion that most commentators assume.
Posted by Mike Shaughnessy at 12:52