Ecosocialism can rescue us from ecocatastrophe 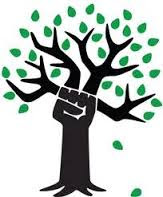 Written by Bert Olivier and first published at Thought Leader

In Ridley Scott’s recent film, The Martian, there is a scene near the end that sums up the often ignored value of the earth. Astronaut and botanist Mark Watney (Matt Damon) is sitting on a bench in a park, shortly after having been rescued from a very lonely existence on the red planet, Mars. He notices the new, green leaves of a small plant in front of him on the ground, smiles, leans forward and, gently putting his fingers underneath the newborn plant’s leaves, says something like “Hello there!” This simple scene condenses one of the crucial “messages” of The Martian, that, compared to the vast majority of other planets, which are probably as barren as Mars, Earth is a veritable paradise.

And, although this is nowhere thematised in the film, it is time for people to start waking up to the saddening fact that humans, driven by an economic system voracious for “growth”, are busy destroying this paradise. Too many people simply bury their proverbial heads in the sand when they hear or read a statement like the one I have just made – unless they sit up and take notice, and do something about it, nature in all its glory will, in the not-too-distant future, probably be visible only in nature documentaries such as those made by David Attenborough.

If you don’t believe me, you could read this keynote address by one of the most uncompromising thinkers of our time, Joel Kovel. It is called “Ecosocialism as a Human Phenomenon”, and was delivered at the International Ecosocialist Conference in Quito, Ecuador, in June 2013. Things have got much worse since then, but judging by Kovel’s considered assessment of the global situation regarding the condition of natural ecosystems, it was already quite bad then.

Kovel opened the address with the remark, that: “We live in an epoch of radical crisis. From the economic side, we see intractable stagnation and vicious class polarisation. And from another side, which I shall call the ecological, we find that the dominant system of production appears hell-bent on destroying the natural foundations of civilisation as it thrashes about in response to economic difficulties.”

If this seems far-fetched to readers, it is probably because mainstream news sources, which are all controlled by the dominant economic forces of our time, downplay the bad news, with the result that most people are not aware of the true dimensions of the looming crisis. Consequently they are so far removed from acknowledging it that, as Slavoj Žižek, philosopher and psychoanalytical thinker extraordinaire, has shrewdly observed, people evidently find it harder to imagine the end of capitalism than the end of the world as we know it.

And yet, the “end of the world as we know it” may not be in the realm of the impossible, or even the improbable. One of the things Kovel invites his audience to reflect on in his address on ecosocialism is the following: “ … consider the activities of the Monsanto Corporation, fully protected by the Obama administration, as it engages in lethal forms of production that will, in just one instance of depredation, finish off honeybees world-wide through its nicotinamide pesticides. Thus we anticipate a future without pollinators, sacrificed on the altar of accumulation. The disregard for what nature has evolved over four billion years beggars the imagination. Indeed, if corporations are persons, as the US Supreme Court insists, then the Exxons and Monsantos of the world are better described as suicide bombers in the service of accumulation than as rational economic actors.”

How many of us have ever thought about what should be rather obvious, if we remember what we learned in primary school, namely, that bees fulfil an essential function in nature across the globe – pollinating plants. That is, they make sure, in the course of collecting pollen for honey, that trees and other plants reproduce. What would happen without them? All the plants that depend on them for reproduction would eventually die – and that is a lot of plants, including trees, all of which are responsible, in turn, for producing oxygen in the process of photosynthesis. Hence, without bees, which are being wiped out systematically by Monsanto in its frenzied quest for more profit, most of the planet’s vegetation would be destroyed, and without the latter all oxygen-breathing creatures, including us humans, would be in deep trouble.

Is this so hard to grasp? And if some, if not most of us, are really the rational creatures we are supposed to be, why are we not doing something about it, such as hammering our governments to censure companies like Monsanto – which, incidentally, is probably also responsible for a host of health problems that people are increasingly experiencing across the world, such as auto-immune diseases like gluten and lactose intolerance, which result in coeliac disease. Why, you may wonder. In addition to producing the pesticides that are destroying the honeybees, this behemoth company,

Monsanto, and other companies like it, are responsible for introducing genetically modified plants into agriculture, and some medical researchers I have spoken to are convinced that the foods made from such GM plants affect human physiology and gastronomy in extremely adverse ways. This should not be surprising – as a species, we developed in close proximity to nature (of which we are, after all, a part), and genetically speaking our bodies are primarily capable of digesting and benefitting from foods such as fruits and vegetables that formed part of our ancestors’ diet.

So how do we combat the economic system that not only allows Monsanto and Exxon to operate, but actually encourages them to do so, the egregious damage that they inflict upon nature notwithstanding? Kovel’s answer is that there is only one option, namely to switch to what he calls “ecosocialism”, an economic system that is not intent on accumulation and profit at all costs, but instead promotes production without depletion of natural resources, because unlike capitalism, it does not set humans up as if they are nature’s adversaries, but accepts that humans – social ecologies – and natural ecologies are interrelated and (could be) mutually sustaining. But let me quote Kovel at length here from the keynote address referred to above:

“Ecosocialism makes a very large claim that must be realised in a host of individual and often seemingly disparate instances, or paths. There is, in other words, no privileged agent of ecosocialist transforming. The agents of transformation emerge interstitially, which is a fancy word for anywhere contradictions ripen and manifest themselves as transformative opportunities: a storm, a mine, a pipeline, a toxic dump, even a classroom, or an individual mind undergoing spiritual development.

Each ecosocialist path is a place of production – for paths have to be made – as well as one of the resistance against the form of production whose banner is capitalist accumulation. We can also think of these as zones of emergence, as contradictions mature and open up on different vistas; hence we can call them ‘horizons’ of various kinds … a horizon is by definition some way off; yet it can also be brought closer, through devising ways of struggle. Often these processes can be formulated in terms of the ‘Commons’, by which is meant collectively owned and organized spaces … forming new conditions of Commoning unifies productive zones and can come to connect them.

“All this bears more than a superficial resemblance to the building of ecosystems, which in the ecosocialist mode of production comes to stand in the place that capital reserved for the commodity. Capitalism may be defined as generalised commodity production; just so is ecosocialism definable as generalisable ecosystem production—this being, however, ecosystems of a definite kind conducive to the flourishing of life … ”

And guess what? Because so-called developed countries are quite removed from older, pre-modern modes of production, compared to countries in the global South – in South America and Africa, for instance – these countries are in a position, according to Kovel, to resist the further expansion of capital and cultivate ecosocialist economies instead. This, in his view, is the only option open to us if we want to avoid an ecological disaster of global proportions. In his words: “Ecosocialism or Ecocatastrophe!”

I hope African leaders will take note of this, and rescue this beautiful continent from the eco-destructive depredations of neoliberal capitalism, which is really just a form of neocolonialism. If such leaders bear the interests of their people at heart, they would reject such neocolonialism in favour of ecosocialism; that is, if they can resist the lure of big payoffs and shiny German sedans. But can they?


As an undergraduate student, Bert Olivier discovered Philosophy more or less by accident, but has never regretted it. Because Bert knew very little, Philosophy turned out to be right up his alley, as it were, because of Socrates's teaching, that the only thing we know with certainty, is how little we know. Armed with this 'docta ignorantia', Bert set out to teach students the value of questioning, and even found out that one could write cogently about it, which he did during the 1980s and '90s on a variety of subjects, including an opposition to apartheid. In addition to Philosophy, he has been teaching and writing on his other great loves, namely, nature, culture, the arts, architecture and literature. In the face of the many irrational actions on the part of people, and wanting to understand these, later on he branched out into Psychoanalysis and Social Theory as well, and because Philosophy cultivates in one a strong sense of justice, he has more recently been harnessing what little knowledge he has in intellectual opposition to the injustices brought about by the dominant economic system today, to wit, neoliberal capitalism. His motto is taken from Immanuel Kant's work: 'Sapere aude!' ('Dare to think for yourself!') In 2012 Nelson Mandela Metropolitan University conferred a Distinguished Professorship on him. From 2015 Bert will be attached to the University of the Free State as Senior Research Fellow in Philosophy. He is also an adjunct professor at the University of KwaZulu-Natal.

Posted by Mike Shaughnessy at 12:07