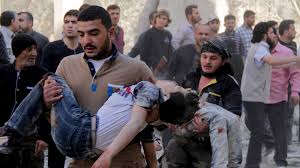 
I don’t often agree with what Max Hasting the ex-Daily Telegraph editor says, but I have to say he has played a blinder in the last week, with his sober and negative assessment of the case for bombing Islamic State (IS) in Syria on BBC TV Question Time last week. Last night I watched him give his view of the vote in Parliament for approval of bombing on the BBC TV Newsnight programme and he was spot once again.

Hastings called the decision ‘gesture politics’ and concluded that MPs were ‘bonkers’ for going along with the Prime Minister, David Cameron’s desire for Britain to join the multi-national air campaign in Syria. This is an accusation normally levelled against left wing politicians, not least the Labour Party leader, Jeremy Corbyn. It usually involves attending anti-government demonstrations and advocating things like a boycott of Israeli goods, as a protest against some perceived misjustice. Hastings added that is also a dangerous policy.

What Hastings meant by using this term gesture, was that, important though it may be to stand in solidarity with our French allies, it is not a rational justification for dropping bombs on a country when there is no credible plan for destroying IS or for it making the British people safer, at home or abroad.

This is the rub really, the Labour MP Margaret Beckett, an ex-Foreign Secretary, who voted in favour of the airstrikes made the point in the debate in Parliament. She said ‘our French allies has explicitly asked us for such support, and I invite the House to consider how we would feel, and what we would say if what took place in Paris had happened in London – if we had explicitly asked France for support and France had refused.’

Hiliary Benn, shadow Foreign Secretary, who won plaudits in Parliament and the media for his rounding off speech, probably because Cameron was so poor at arguing his case, made similar points. He referred to the Labour Party’s tradition of internationalism and the United Nations resolution which he said authorised the bombing, although that is contested by many international law experts. He also referred to France’s government as ‘socialist’, which is only true if you accept the very broadest definition of the term.

We heard a lot of MPs listing the atrocities committed by IS, but this is uncontested, everyone would like to see IS stopped from murdering more people, but how will a handful of British warplanes dropping a few bombs make the slightest difference?

Emotional arguments like this were put forward by others too, including the Prime Minister, but on the substantive issue of what will this air campaign achieve, there was little or nothing, and what there was, was wishful thinking, not a clear headed assessment of the military and diplomatic situation in Syria and the region.

In the end the government got a 174 vote majority in Parliament, with 66 Labour MPs supporting the airstrikes, and others abstaining. 153 Labour MPs voted against along-side 53 SNP (and their 2 suspended MPs), 3 SDLP, 2 Lib Dems, 7 Tories, 2 PC MPs and Caroline Lucas the Green Party MP. A total of 223 against and 397 for.

And so, we have got ourselves into another foreign military adventure, probably for the foreseeable future, with all the loss of civilian life in Syria it will entail, and perhaps elsewhere too. I admit it made me despair watching the debate last night, after all we have gone through since the 2001 attack by hijacked aeroplanes on New York and Washington DC. No lessons have been learned despite all the evidence that this will likely inflame the situation even more.

We elect MPs to take difficult decisions on our behalf, but we should be able to expect that these representatives take an intelligent, informed and rational view. Instead many MPs last night based their decision on emotion and a knee jerk reaction to the mass killing in Paris last month. The MPs who voted for this air campaign have let us down.


Is it any wonder that over a third of those registered to vote in general elections do not use their vote, let alone all those who don’t even bother to register?
Posted by Mike Shaughnessy at 10:50