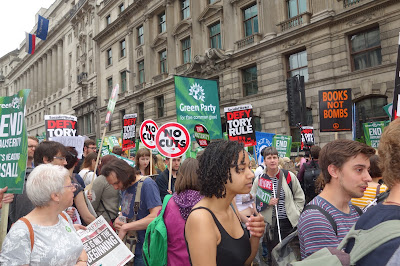 On Saturday evening after attending the huge demonstration against the government’s austerity agenda in London, I spoke to friend, who is not a political activists, but who is fairly politically aware, who questioned the democratic legitimacy of the march so soon after a general election?

My friend wasn’t the only one to pose this question. David Aaronovitch, the ex tankie turned neo-con, made the same point via his twitter account, and even the normally lefty type Sunny Hundal writing on his Liberal Conspiracy blog says ‘we have to find a better argument than ‘the Tories have no mandate‘ because it sounds ridiculous to anyone outside the hard left.’

The argument Hundal refers to is the line that only 24% of registered people voted Tory, even though the system delivered them a majority government. They still did win though, by the rules of our long established electoral system, and furthermore, if you totalled together the Tory, Lib Dem and UKIP vote (all pro-austerity parties) it exceeds 50% of the votes cast.

Of course why the Tories won the election is down to a combination of factors not least that voters were unsure of Labour, who didn’t offer much less than the Tories on the question of cutting public spending anyway.

In Scotland, the SNP won almost all the parliamentary seats on an anti-austerity platform, and the option of voting Green against austerity was available in England, but few I suspect thought we would be in a position of being able to call the shots post election, and they voted tactically for Labour.

There is nothing anti-democratic about protesting against the government, there are protests most weekends in London, although not as large as this anti-austerity one, and these things can have an effect of government policy. The Tories have only a small majority of twelve MPs remember, which will no doubt get smaller as by-election losses chip away at their numbers.

One aim of the demonstration, not specifically about the fairness of the public spending cuts, was to bring together different groups, the unions, political parties, welfare campaigners, housing activists and environmental groups like the anti-fracking activists. In this it was very successful, I think. This is movement building, unifying the various opposition groups under a common banner. Building on the Occupy movement, UK Uncut and Podemos in Spain, developing a more participatory democracy, and challenging the tired old status quo of politics in this country and beyond.

Politics and democracy isn’t all about elections and Westminster anyway, and if our predecessors had not taken a different view we wouldn’t even have universal suffrage now. There is also a kind of hypocrisy at work here from (mainly) the right, in that protesting outside of the electoral parameters of voting every five years is wrong. Like the various right wing ‘think tanks’, for example the Tax Payers Alliance, who bombard the media with their agenda of cutting public spending and cutting tax for the wealthy, on an almost daily basis between elections, is somehow legitimate though.

Saturday’s demonstration lifted my spirits a fair bit, because it’s good to see there are plenty of others who feel the same way as me about this Tory government, especially the large Green presence, and are prepared to mobilise against it.


This will be a long and hard fought campaign, with many small battles along the way, including some direct action protests and maybe industrial action too. Saturday was a good start, and I think the high numbers taking part surprised the media, and we may well have a few more surprises for them in the coming months.