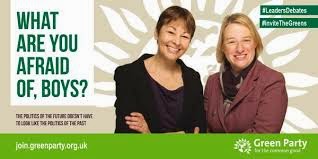 Bennett argued that "austerity has failed" and that the country needed a "peaceful political revolution to get rid of it", while Lucas promised "real leadership" on tackling climate change and investment in the public transport system. "Our plans will make a positive difference to people's lives, create new jobs and help protect our environment," Lucas said.

Support for the Greens has increased since 2010, and it now boasts more members than Ukip. The party is still only expected to win just one seat, in Lucas's Brighton Pavilion constituency, but it is likely to have a wider impact on the election by taking votes from former Labour supporters.

Speaking on Radio 4's Today programme before the manifesto launch, Lucas said the party is also promising a nationwide insulation programme and an end to "cold homes", in which families are unable to afford heating.

She ruled out the idea of backing a Conservative budget under any circumstances, but said the party would potentially deal with Labour on a case-by-case basis.

The party's political broadcast, depicting the other party leaders as a spoof boy band, has been watched more than 1.2 million times on YouTube and Facebook.

Here's what the Green Party is promising in its manifesto:

Closing the deficit will no longer be the main objective of the UK's economic policy, with an end to austerity. The manifesto requires borrowing of £338bn over the next parliament. Public sector jobs will be "restored" and spending will be increased to almost half of national income.

Taxation loopholes will be closed through a "tax-dodging bill". The richest one per cent will face a two per cent wealth tax, which will help reduce employers' National Insurance. Corporation tax will be increased from 20 per cent to 30 per cent for bigger firms and a "Robin Hood" tax on banks' financial transactions will be introduced. People on salaries of more than £150,000 a year will be taxed at 60 per cent of their income, and the bedroom tax will be abolished.

One million "good" jobs will be created, all paying at least a living wage. Minimum wage will be increased to £10 by 2020. Zero-hour contracts will be banned and the highest wage in any organisation will be limited to ten times the lowest. A maximum 35-hour working week will also be introduced to combat unemployment and improve life quality.

At least 500,000 social rented homes will be provided by 2020. Rent will be capped, longer tenancies introduced and landlords required to have licences. Mass council house sales and the right-to-buy scheme will be stopped, and letting agents' fees would be abolished.

The overall NHS budget will be immediately increased by £12bn and the coalition's Health and Social Care Act 2012 will be repealed, with an end to privatisation of the NHS. The health service will be publicly funded and free at the point of use. Mental health will be given greater priority and resources, while the elderly will be given free social care. Prescriptions will be free for all.

University fees, SATS, league tables and Ofsted will be scrapped. Education and childcare will be free, but voluntary, for all children up to the age of seven. Free schools will be brought into the local authority system and all teachers will be qualified.

Tackling climate change will be a major foreign policy priority. The UK's nature and wildlife will be given better protection. Fracking will be banned, while coal power stations and nuclear stations will be phased out. An investment of £85bn will be made in a public programme of renewable energy, flood defences and building insulation. The badger cull, factory farming and animal testing would be banned. Local sustainable agriculture will be given more support and strict animal welfare standards will be introduced.


Immigration and the EU

The EU will be reformed to give powers back to local communities and a referendum will be held on the UK's EU membership. Restrictions on foreign students will be removed and asylum seekers will be given more rights. Overseas aid will be increased to one per cent of GDP within ten years.

The UK's nuclear weapons will be scrapped. Police stop and search powers would be restricted and privatisation of the police would be prevented. Drug addiction would be treated as a health issue, not a criminal issue, and offender rehabilitation would be promoted.

A consultation will be held on introducing a "basic income", a fixed amount paid to every individual. Rules under which the unemployed must work for benefits will be scrapped. Child benefit will be doubled and pensions will be increased to an amount that "people can live on".

Proportional representation will be introduced for elections. The House of Lords will be elected for five-year and ten-year terms. Local authorities will be given more powers on education, transport and other services.

Equality and diversity lessons would be made mandatory in all schools. The tens of thousands of men convicted under former anti-gay laws would be pardoned. Retailers would be encouraged to ban "lad mags" in a bid to tackle media sexism.

The voting age would be lowered to 16. The railways would be renationalised, High Speed 2 would be scrapped and public transport fares would be immediately cut by ten per cent.

First published at The Week
Posted by Mike Shaughnessy at 10:32