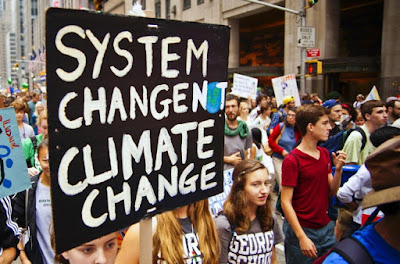 Written By Mike Cease and first published at Tucson Sentinel

While the ruling class mostly denies or ignores the issue, young people get it. 16-year-old Swedish climate activist Greta Thunberg sailed into New York last month and led hundreds of young people striking in front of the United Nations for climate action now. Thunberg was interviewed on Amy Goodman's "Democracy Now!" program this week and she said, "We are striking to disrupt the system."

System change to fight climate change is what is needed now. I believe that too much of the discussion on climate change is framed as what we need to do to "prevent it" such as "by 2030" or "by 2050." This phraseology fails to acknowledge that we have already entered into the realm of a CCC (Climate Change Catastrophe).

In order for our response to the CCC to be effective, the solutions must be massive, far-reaching and systemic. The Green Party's vision for mobilization and transformation is known as the Green New Deal. The real GND will fundamentally change the decaying fossil fuel economy into a new, green economy that is environmentally sustainable, economically secure and socially just.

F.D.R.'s New Deal of the 1930s provides historical context of scale. The Green Party's GND also encompasses our vision for eco-socialism and reparations.

[W]e will build an economy based on large-scale green public works, municipalization, and workplace and community democracy. Some call this decentralized system 'ecological socialism,' 'communalism,' or the 'cooperative commonwealth,' but whatever the terminology, we believe it will help end labor exploitation, environmental exploitation, and racial, gender, and wealth inequality and bring about economic and social justice … Production is best for people and planet when democratically owned and operated by those who do the work.

We commit to full and complete reparations to the African American community of this nation for the past four hundred plus years of genocide, slavery, land-loss, destruction of original identity and the stark disparities which haunt the present evidenced in unemployment statistics, substandard and inadequate education, higher levels of mortality including infant and maternal mortality and the practice of mass incarceration. We recognize that reparations are a debt (not charity) ... We believe that the leadership on the question of what our nation owes to this process of right ought to come from the African American community, whose right to self-determination and autonomy to chart the path to healing we fully recognize.

According to Tony Davis of the Arizona Daily Star's and Andrew Howard of Cronkite News' April 29, 2019 article, Tucson is the third-fastest-warming city in the U.S. A National Climate Assessment report for the Southwest region details climate change impact to the region and to Southern Arizona in terms of water, wildfires, extreme heat and human health.

What does the Green New Deal look like for the city of Tucson?

One example is the city of Seattle in an article entitled "What would a city-level green new deal look like? Seattle's about to find out" by Kristoffer Tigue of Insideclimatenews.org, August 17, 2019. Tucson is also going to have a city-level Green New Deal. As mayor, I am going to bring System Change to fight Climate Change right here in our own community.

In addition to facing a climate crisis, Tucson also faces an economic crisis. We are one of the top-ten most economically distressed cities in the nation according to CityLab's Sarah Holder in an article entitled America's Most and Least Distressed Cities" on September 26, 2017.

As mayor, I will implement the real Green New Deal for Tucson in a large-scale mobilization to respond to the dual challenges posed by both the climate and the economy. This will include retrofitting hundreds of thousands of homes and businesses with energy conservation, solar and water harvesting with thousands of new living-wage jobs for our community. Furthermore, the city of Tucson's office of Procurement contracting codes will be restructured to include conservation and fair-wage employment criteria.

Tucson's new green economy will also bring long-needed economic and social justice transformations to end exploitation and wealth inequality. Studies have shown that the single most-import measure to improve the economic health and well-being of a community is to enact a living-wage minimum wage ordinance of $15 per hour. It's been done in Flagstaff and other cities and we will do it here on day one. What has been lacking is the political will and that will change.

The question is often posed, "how can we afford to pay for these programs?" I believe that we need to re-frame this question and ask, given both the climate imperative and the economic imperative, "How can we afford NOT to invest in our community?"

The city of Tucson currently has $86 million investment holdings in Wells Fargo Bank, a principle supporter of the socially and environmentally disastrous Dakota Access Pipeline project. We will divest and re-invest these funds into a new municipal community bank. Zero-interest loans will be made to homeowners and businesses based upon future-savings in energy and water bills as one funding mechanism for thousands of energy conservation, solar and water-harvesting retrofit projects to transform our community.

An additional funding mechanism will be to completely transform economic development spending away from bringing out-of-state firms such as Caterpillar into a new local-first investment paradigm. The city of Tucson currently has a $1.6 billion operating budget. Some of these taxpayer resources must be prioritized to address both the climate crisis and the economic crisis facing our community.

Furthermore, I believe in protecting Tucson's air-quality and water resources. As mayor, I will use the full capacity of the mayor's office to stop the Rosemont mine. If this project goes forward it will have an immensely damaging impact on the quality of life in this community for decades to come. Water is Life!

Mike Cease is the Green Party nominee for mayor of Tucson, Arizona, USA.