Cameron is in the Panama Papers Scandal up to his Neck 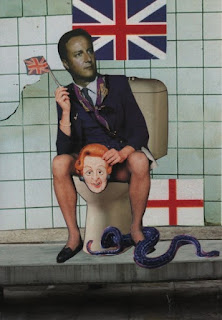 The Prime Minister is not having good time of it at the moment. What with the ever widening split in the Tory Party over the upcoming referendum on the UK’s membership of the European Union, now the leaked Panama Papers, show that his late father was a director of a company registered in the Bahamas to avoid paying British tax. The company went as far as making sure all board meetings were held in the Bahamas or Switzerland.

Cameron’s office first issued statements yesterday saying that his family’s financial details were a ‘private matter’. All of which is reminiscent of his attitude to his alleged illegal drug taking past, just don’t talk about it. They followed this up by churning out a load of spin about how the government had tightened up tax avoidance and so forth.

By today, Cameron was forced to make a further statement, and the Labour leader, Jeremy Corbyn should get credit for hounding the Prime Minister on the matter, where Cameron said:

"In terms of my own financial affairs, I own no shares.

"I have a salary as prime minister, and I have some savings which I get some interest from and I have a house which we used to live in which we now let out while we're living in Downing Street, and that's all I have."

Later in the day his office issued another statement which said:

"To be clear, the prime minister, his wife and their children do not benefit from any offshore funds.

"As has been previously reported, Mrs Cameron owns a small number of shares connected to her father's land, which she declares on her tax return."

But this begs the obvious question, where is this money now? In all likelihood Cameron’s mother will have inherited it from his father. It may well be held in Britain now, but has any tax been paid on it? Cameron will have already benefited from this money, and stands to inherit it himself one day. Is this appropriate behaviour for a Prime Minister of this country? I don’t think it is.

I’m sure that Cameron straightened out his financial affairs when he became the Tory Party leader, maybe even before that. But the before that period and what will happen to this money in the future, is surely relevant to the politics of today. A British Prime Minister has gained, and will gain further it seems from dodging paying British tax, which is completely unacceptable.

It could be that more evidence emerges from these leaks, and on other MPs too, it has all makings of a full blown political scandal.


What will tomorrow’s news bring? I think the more this vast amount of information is gone over, more than 11 million documents, the more that will come out. One Prime Minister (of Iceland) has already been forced to resign. It could well finish Cameron along the way as well.

Posted by Mike Shaughnessy at 14:49