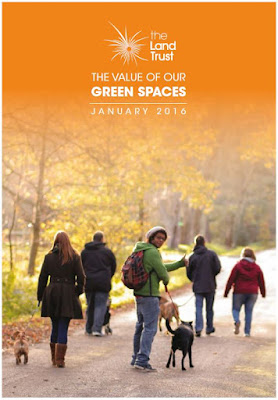 A study commissioned by the Land Trust by economic consultants, Carney Green shows that access to nature by the public contributes £30 towards health and wellbeing benefits and £23 towards crime reduction and community safety.

The survey was of visitors to the Land Trust’s over 50 green spaces in the UK, but the exact methodology and the full details of the survey have not been released. You might expect that visitors to green spaces would give positive views of visits to nature reserves, but it does seem to be intuitively true that there is value in getting away from the toils of everyday life, and communing, even in a small way, with nature.

Here are some of the results:

The average rating for life satisfaction from people using our green spaces was higher at 8.14 the national average of 7.51.

The average rating for levels of anxiety from people using our green spaces was lower at 2.33 than the national average of 2.93.

For every £1 spent P.A. by the Land Trust, society benefits on average £30.30 in health care provision because people using our sites feel fitter and healthier.

For every £1 spent P.A. by the Land Trust, society benefits £23.30 towards the cost of crime and anti-social behaviour, as our green spaces offer community activities and bring people together.

The perceived reduction in crime and feeling safer, due to the Land Trust’s activities, is equivalent to a £40.9 million p.a. saving to society.

25 – 30 per cent of park users also saw the value in using open space to “relax and get away from work”, spend time with their family, relieve stress, ‘let off steam’ and ‘feel refreshed’.

All of this brings to mind the 'metabolic rift' between humans and nature that the capitalist system causes, according to John Bellamy Foster who coined the term, tracing it back to Marx’s notion of the "irreparable rift in the interdependent process of social metabolism” from Capital volume 3. Marx theorized a rupture in the metabolic interaction between humanity and the rest of nature emanating from capitalist production and the growing division between town and country.

Joel Kovel too talks about the rupture of ecosystems wrought by capitalist production, and of course human beings are ecosystems themselves, and by being placed in what is an alien environment, the daily struggle to earn money, just to survive, causes much mental ill health, stress, depression etc.

Whenever I visit one of these types of green spaces, I am always struck by the peace and quiet, and that time seems to drift away, a far cry from normal everyday life of commuting into London and back, and the pressures of the job and all of the management bullshit, when you are there.

So to those who would have us believe that there is something ‘natural’ about the capitalist system, or it is part of ‘human nature’ to behave in ways that are compatible with capitalism, this survey should come as a jolt.

The only thing that is natural about capitalism, is that it was invented by a creature of nature, us. If it was such a ‘natural’ thing, why did it only emerge a couple of hundred years ago? And why was it necessary to force it onto people, with violence, like the enclosures of common land in Britain, to force people into the towns and factories, the centres of production?

Take away people’s alternative way of living, and they are compelled to participate in the capitalist system, they have no choice. It is still happening today, enclosures of common land in developing countries is rife, because it is not natural to the peoples of these lands, to go and work in a factory, 16 hours a day. They are often forcibly removed from common land.


This survey is useful, but is too timid in its monetised conclusions, it does though provide food for thought.
Posted by Mike Shaughnessy at 11:12