A Short History of Green Left 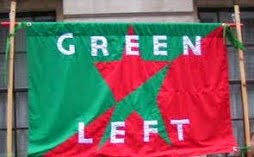 Green Left was formed in 2006 when a small number of members of the Green Party of England and Wales met at spring conference and drafted the Headcorn Declaration. Later in the year in June, thirty seven members met in London to formally adopt the name Green Left (the original prototype grouping was called Green Revolution) and amended and adopted the Headcorn Declaration. I was one of those members.

The thinking behind the need for such a grouping within the Green party, was that the party should ‘raise Green Party politics to meet the demands of its radical policies’ and to ‘act as an outreach body that will communicate the party’s radical policies to socialists and other anti-capitalists outside the party.’ GL would also promote ecosocialism as a solution to our social and ecological ills.

The ensuing nine years has seen members come and go from Green Left but supporters’ numbers have risen steadily, so now Green Left is bigger than it has ever been before. It should be noted that by far the commonest reason for people leaving GL has been over actions taken by the Green party and has had little to do with GL itself.

Events on Brighton Council post the 2011 election of a minority Green party administration imposing public service cuts, is chief amongst the reasons cited by erstwhile comrades for heading for the exit.

Within the first year GL adopted the (first) Ecosocialist Manifesto written by Joel Kovel and Michael Lowy in Paris in 2001. The manifesto is onto its third version now, but the original is still my favourite. Check it out, it's really inspiring I think.

The early years of GL saw attacks from some elements within the Green party, but on the whole as people have gotten use to us, this has fallen away somewhat, although we certainly still have our detractors.

The first big test for GL was the decision within the Green party to hold a referendum in 2007 on whether to replace our ‘principal speaker’ set up with a leader and deputy leader(s). GL opposed the change, quite rightly I think, and campaigned strongly in the ‘no’ camp. Unfortunately, the vote went the other way, but we dusted ourselves off and got on with the more important business of changing the way the party projected itself, as a party of the political Left.

GLs main contribution to the evolution of the party has been made at national conferences, putting forward motions and debating issues firmly from the Left and holding fringe meetings on matters of interest to this constituency. ‘The Watermelon’ magazine is written, produced and distributed at conference by GL supporters and less frequently, ‘The Ecosocialist’ newspaper (together with Socialist Resistance) is likewise handed out on demonstrations and protest marches.

The regional (and later sub regional) structure of GL was first introduced in 2009, and although this has achieved only limited presence, with sporadic spikes in West Midlands and the South West, recent indications from Brighton and London in particular, appear to show a growth of local level organisation and activity.

Increasingly, GL is focusing on working with trade unions and has been busy encouraging GL regions to appoint/elect trade union liaison officers (TULOs), and the success of this is shown most spectacularly in the recruitment of the RMT union president, Peter Pinkney to the Green party and his candidacy at the general election.

Several GL supporters have done and do continue to hold senior positions within the Green party and positions in the wider social, political and peace movements.

‘With Caroline and then Natalie out in front, and with the (left leaning and very influential) Young Greens and groups like Green Left organising among the activists, the image presented in recent years has been much more consistently left. Gone are the days of “not left or right but forwards”. The party is now clearly an electoral expression of the emerging new left.’


And that sums up what GL is all about. When Green party members ask me why they need to join GL, my short answer is; ‘to keep the Green party honest,’ i.e. on the Left.

You can join Green Left (one year’s free membership and only £5 per year thereafter) by emailing the membership secretary at malcolmbailey@millersbridge.co.uk. If you are from London please copy me in also at mike.shaughnessy@btinternet.com.

You must be a Green party member.

Posted by Mike Shaughnessy at 11:12