Review - Naomi Klein's latest book This Changes Everything: Capitalism vs The Climate 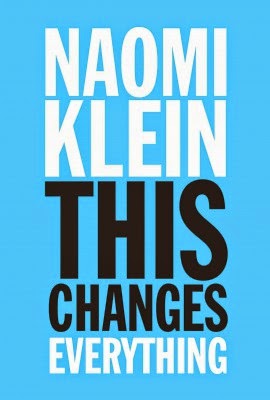 This Changes Everything is not just a book; none of Naomi Klein's books have been. It’s also a film and it comes out just days before massive climate change demonstrations in cities around the world, to coincide with a U.N. meeting on climate change in New York.

In Klein's words the book is: ‘a revolutionary call to bring about the transformative changes required to confront the crisis. In doing so proving that the climate crisis cannot be solved without closing the inequality gap and deepening democracy at every level.’

From No Logo (2000), which became one of the leading books of the anti-globalisation movement to Shock Doctrine (2007), showing how neo-liberalism needs crisis to grow and to justify austerity, Klein's books have been game changers: spawning movements, inspiring countless banners and putting very succinctly what less eloquent folk were trying to say.

For many of us involved in the climate justice movement the premise of what Klein is saying is nothing new. Pursuing a neo-liberal economic agenda is in direct confrontation with the measures needed to tackle climate change. More than one South American president has given spine-tingling, earth-shattering speeches about capitalism and climate change, leaving listeners in awe. Even the UK's bonny Prince Charlie has suggested that one would need to reform capitalism in order to deal with climate change.

Overthrow, destroy, dismantle, reform, restructure, transform. . . whatever adjective you want to use, depending on your political leanings – one thing is for sure, no more tweaking the system. It is time to be change or be changed.

What This Changes Everything does is to make watertight the case for transformation away from a capitalist system. It explains in no uncertain terms what capitalism does, why it is wrong and why the rules of the game have changed. In Chapter 2, highlighting the anti-capitalists’ arch enemy the WTO, Klein demonstrates through case studies how the pursuit of free trade has meant that, time after time, initiatives to kick-start local renewable business have been thwarted by free trade policies. She tears apart the green billionaires, supposed saviours who have invested their billions in trying to kick-start a green economy while continuing to expand their fossil fuel guzzling businesses. Richard Branson has a number of pages dedicated to him and he does not come off well. Geo engineering, climate deniers, big green NGOs invested in oil and gas all get the same treatment. Completely shredded by the shrewd, well-researched and succinct Naomi Klein.

The key question, then, is: what is holding us back from these transformative changes and a transition to zero carbon economies? It’s not technological solutions; we have them and they work, but we are not ‘stopping the fire, we are dousing it with gasoline’ because doing the things that are necessary to lower emissions is fundamentally in conflict with capitalism; ’We are stuck because the actions that would give us the best chance of averting catastrophe are extremely threatening to a minority elite that has a stranglehold over our economy, our political process and most of our major media outlets.’

Klein is hard on the left (and herself) for the lack of involvement in the climate issue and that's where the book becomes a call to action. ‘It's a painful irony', argues Klein, 'that while the right is forever casting climate change as a left-wing plot most leftists and liberals are still averting their eyes, having yet to grasp that the climate science is offering them the most powerful argument against capitalism since William Blake’s satanic mills blackened England's skies.’

This accusation feels a little unfair. In the UK particularly there is a rich tradition of environmentalism from places like the Centre for Alternative Technology, and its zero carbon Britain project, Climate Camps, Transition Movement, not to mention the numerous protests at UNFCCC meetings etc since 2000. But campaigning on climate change is very complicated – and somewhat reminiscent of The Life of Brian, with its multiple groups.  This book, with its galvanising call to action, might just scrub away those differences and bring a wide range of diverse groups together.

The most striking element of This Changes Everything is its central argument: that change is coming whether we like it or not. In September 2014 leading scientists from the World Meteorological Association said that surging greenhouse gases – now at record highs in the atmosphere – mean that ‘time is running out’. We are on track for a world that is 4 degrees warmer. And as Klein puts it, ’Even in the best case scenario a 4 degree temperature rise is calamitous and makes 2 degrees look like a utopian dream.‘


The response if we do nothing now will be ‘the big corporate, big military, big engineering responses to climate change – the world of a tiny group of big corporate winners and armies of locked out losers that we have imagined in virtually every fictional account of dystopic future.’

Chillingly, it looks like we are already some way down that road. To avoid that future we have to create a totally different economic system, one that does not run on fossil fuels, demand endless growth, or concentrate power in the hands of the 1 percent. It is a future based on community and humanity, a future where we get rid of the broken system and replace it with something fairer. This book is full of inspiring quotes and goose pimple inducing paragraphs that leave you feeling simultaneously hopeful, excited and a tiny bit overwhelmed. But the choice is fairly clear: ‘In the hot and stormy future we have already made inevitable through our past emissions, an unshakeable belief in the equal rights of all people and a capacity for deep compassion will be the only things standing between civilization and barbarism.’

See you in the streets.