The New Climate Normal: Capitalism is Killing the Planet 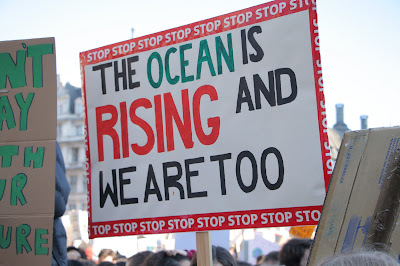 Written by Rebecca Green and first published at Socialist Alternative

In almost every metric to measure extreme weather, the Earth is breaking record after record, from the hottest heat waves to the worst fires to one of the most active hurricane seasons on record. This is the new normal and yes, this is climate change.

Millions have been evacuated, and hundreds of thousands have lost their homes to fires and flooding since COVID-19, a pandemic that itself foreshadows the dangers of unfettered environmental degradation. Across the West Coast, under menacing orange skies, people have been forced indoors to avoid toxic smoke from historic fires in the middle of a respiratory pandemic.

The fires and smoke have created a dramatic sense of fear and dread among a huge section of the population not just in California, but in Washington State and Oregon as well. While millions, especially young people, see the need for immediate, dramatic action, there is also an overwhelming sense of fear that we’re out of time.

The two main political parties in the U.S. stand squarely in the way of the seismic change that is necessary. The only way out of this crisis is if we do it ourselves, and involve millions in the process of democratically planning and building an environmentally sustainable, socialist society.

As global temperatures rise, dry climates become drier, creating more fuel for fires out of scorched fields, forests, and debris. Warmer weather also means that in wetter climates, the air can hold more moisture, meaning that tropical storms and hurricanes come with more threat of flooding. Even if we went 100% carbon neutral tomorrow, extreme weather would continue. While we need to stop this crisis at its source, we also need to adapt to a new climate norm.

One piece of this is ramping up and fixing our broken forest management and wildfire response. Wildfires are natural in places like California, but an “if-it-burns-extinguish-it” approach for decades has prevented fires that would have cleared debris now being gobbled up by megafires.

Combine this with decades of underfunding, reliance on prison labor to fight fires (who were in short supply because of COVID-19 outbreaks), and you have California desperately appealing to other states and even Australia to send firefighters. We need full funding for wildfire response and forest management – including controlled burns.

While we need adequate resources to respond to climate threats, we also need to reconsider where we can live and work. If carbon emissions continue as they are, in 30 years half a million homes will flood each year. By 2070, 28 million people will be impacted by Manhattan-sized megafires.

And yet, since 2010 in coastal states, the most flood-prone areas have seen the highest rates of home construction, and development is continuing in areas hit by wildfires on the West Coast.

Developers have continuously pushed back against building codes that would require things like fire and impact proof windows, which often make the difference between a home sustaining some damage or being completely leveled.

Meanwhile, the insurance industry is playing a disappearing act. Last year, California officials had to ban insurers from cancelling policies for 800,000 homes. Hundreds of thousands are being dropped by their insurance companies because insurance is just not profitable when a house burns down or floods.

People don’t need for-profit insurance – we should be ensuring all people have affordable high-quality housing with the promise of relief in the case of any natural disaster. This would include fire proof windows and metal roofs in fire-prone areas, and high-quality metal shutters and hurricane straps to secure walls to rafters in coastal areas. The insurance industry is a shoddy substitute for social services.

Instead, we need a massive jobs program that could put millions back to work in high-quality union jobs building affordable, sustainable housing and retrofitting homes to withstand extreme weather funded by taxing the rich.

No Time to Wait

The Republican Party and Donald Trump are obvious threats to the environment, but the criminal negligence of the Democratic Party that controls California, Oregon, and Washington is life-threatening too. With one hand, California Governor Gavin Newsom mandates cars be fossil-fuel free by 2035.

With the other, he has approved 36 new fracking permits since COVID-19 began. In July, he cut pay for firefighters by 7.5%. In May, budget cuts from his emergency pandemic budget meant CalFire added just 167 firefighters to its ranks, instead of the 500 they requested, which is itself far short of what they need.

Newsom also opposes raising taxes on the wealthiest in the state – so where, then, is the money for wildfire response supposed to come from?

Joe Biden has a far-reaching climate plan compared to those of Democrats past, but it still falls wildly short of what is necessary, and he still doesn’t support a Green New Deal. To win even his modest measures, Biden and the Democrats would need to directly take on the fossil fuel industry, developers, and major polluting industries, which they continually refuse to do.

Just 100 fossil fuel producers are responsible for 70% of emissions from the last two decades – is it any wonder they promote individual lifestyle change as a solution? The billionaires that have run our planet into the ground have known about climate change for decades, and they know it’s getting worse.

As long as our society is run on the basis of profit, we will have to battle moneyed interests every single step of the way to win the most modest changes. And as long as our two political parties are both beholden to these corporate interests, we’ll have to fight them too.

We don’t have time to let them slow us down anymore: to avoid full-scale climate meltdown, we have to completely do away with the system of capitalism. Private utilities and fossil fuel companies should be taken into democratic public ownership.

We need to build on the youth climate movement that has brought millions into the street to fight for our futures. To win, we will need a mass, revolutionary movement of the working class, the class that can bring society to a grinding halt and build it up from the ground again, on a sustainable basis.

Posted by Mike Shaughnessy at 08:18