Who will be best placed to defeat Emmanuel Macron in 2022 in France? 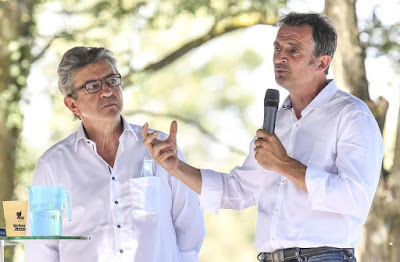 Jean-Luc Mélenchon and his guest Eric Piolle at the Summer Camp of “France Unbowed”.

August 2020
Written by Claire Fairbrother
In the absence of a clear challenger to president Emmanuel Macron - other than Marine Le Pen, the populist leader of the Front National - activists from Europe Écologie-les-Verts (EELV) and from La France Insoumise (LFI) or “France unbowed “were given the rare opportunity this Summer to explore the idea of bringing the two parties together with a single candidate for the 2022 presidential elections.

Whether the purpose of the event held on Friday 21st August where the mayor of Grenoble Eric Piolle turned up as a guest of Jean-Luc Mélenchon, the leader of LFI was anything but a publicity stunt remains to be seen.

Cynicism aside, however, the significance of this very public meeting of minds between those two high profile French political figures coming from such different ideologies and political journeys should not be underestimated.

The friendship between the two men was forged in the course of Eric Piolle’s 2014 mayoral election in Grenoble, the dynamic and innovative capital of the French Alps. Bringing together members from the city’s civic society considerable network and five different progressive parties, including candidates from  Jean-Luc Mélenchon’s LFI, the 41 years old ecologist and former Hewlett Packard Manager ran a campaign based on an agreed programme of environmental and social justice pledges.

At the 2017 presidential elections, EELV and Eric Piolle called on voters to support Jean-Luc Mélenchon’s candidature. In 2019, the mayor of Grenoble and his cross parties list of candidates were re-elected with a 53% majority.

A life long socialist, 69 years old MP, MEP and leader of a 70,000 members strong France Unbowed, Jean-Luc Mélenchon has some experience as a candidate for the presidential elections. In 2012, he ran for the “Front de Gauche”, an electoral pact between socialists, communists and two minor left wing parties. He came fourth and achieved 11% of the vote in the first round. In 2017, he came third with 19.58% of the votes. Because of the two rounds system of voting, Mélenchon never reached the final presidential contest. Only the two candidates with the largest number of votes in the first round can enter the second round.

Since 2017, the list of candidates for Europe Écologie-les-Verts came third at the 2019 European Elections with 13.47% of the votes. At the municipal elections held in March this year, a historic green wave  swept up votes in 8 of the 10 major cities, including Lyon, Bordeaux, Strasbourg, Tour, Annecy, and for the second time in  Grenoble.

Which brings us back to the significance of the capital of the Alps mayor Eric Piolle making a guest appearance at the France Unbowed summer camp on Friday 21st August. Jean-Luc Mélenchon welcomed his friend with these warm words: “His presence here means one thing. We have to get to what is fundamental. Yes, of course, we must talk about what we disagree about, but we must also make the most of what we are in agreement with”. And added “There is no doubt that we have a debt towards the historic ecology movement, but from where we stand, you cannot behave as if you could have it all”.

Eric Piolle proposed that for the regional elections in 2021 and this in 4 of the 13 regions, EELV and LFI could prove that, “together, we can win”, to which Mélenchon replied “Piolle is the only one from EELV who says that this is possible”. However, wishing to go much further, he added: “There are 13 regions, and we are for the same thing to apply everywhere”.

So, what are the chances of a green/red alliance as favoured by these two unlikely political companions of delivering future electoral successes beyond the municipal level?

What is clear is that LFI, with its disciplined democratic centralist model, well trained and committed cadres, a charismatic leader and an alleged membership of 500,000, it is a left wing party which can legitimately claim to have had the support of 7 million of the electorate at the first round of the 2017 presidential elections. It is a party machine designed to win elections and in particular, presidential ones.

With EELV, we are dealing with a much looser organisation - more like a mini-federation operating within the wider and diverse ecology movement.  It is difficult to know exactly how many people are members as people join, leave and rejoin and, invariably, on the internet.  A figure of 10,000 members has been quoted, but that may be an underestimation.

What does make EELV a strong organisation is therefore not so much its internal governance or actual membership, but its strong message about the imminent threat of global warming for future generations and its grass roots presence.

It has been reported that 36% of French people support the “ecology movement”. One of the main weaknesses of EELV is its lack of a recognised leader who could possibly come second at the first round of the 2022 presidential elections and hope to defeat Emmanuel Macron at the second round.

By putting himself forward as the potential EELV presidential candidate for 2022, and by being seen actively engaged in a dialogue with the leader of France Unbowed, Eric Piolle is going where no one from the ecology movement has gone before. His very public appearance at the France Unbound summer camp and his show of friendship with Jean-Luc Mélenchon is not only challenging his own party leader, the more “liberal” MEP Yannick Jadot, but it is also laying the foundations for an eco-socialist alternative to neo-liberal capitalism and “politics as usual”.

Claire Fairbrother is an ecosocialist activist.

Posted by Mike Shaughnessy at 04:36