Why I Hate the Tories 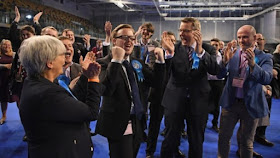 I am from a Labour party supporting background, raised in local authority housing, schooled and paid for and maintained in higher education by the same municipality, a Labour run council. My dad was a shop steward in the engineering union too, so it’s no surprise then that I have never even considered supporting the Tory party. It always seemed to me that the Tories did not represent my interests, rather they are the party of the wealthy establishment and the ‘bosses.’


I was 17 when Margaret Thatcher became Tory prime minister in 1979, and I remember being furious that I was not allowed to vote in that election, when older people, who I considered ignorant of politics were. Thatcher set about destroying the political post second world war consensus, often referred to as ‘welfare capitalism.’ The welfare state, which had served me and others like me so well, was consigned to dust bin of history and replaced with rampant individualism, privatisation of public assets, the neutering of trade unions, tax cuts for the rich, promoting inequality and a nasty patriotism bordering on jingoism.

Through the following 18 long years, first with Thatcher as leader, then John Major, all of these things came to pass, turning the country into a neo-liberal front runner in the process. Communities that were once characterised by social solidarity, like mining communities, turned into barren wastelands, where good jobs were scarce and money hard to come by. An attitude of ‘bugger everyone else, me, me, me, reigned in place of the old esprit de corps.

I can still remember vividly election night in 1997, when the Tories were spectacularly booted out of office, with big political names losing their seats, culminating in arch Thatcherite Michael Portillo losing a pretty safe majority in his constituency. The night just kept getting better. But Thatcher had managed to change the Labour party into a paler shade of the Tories, and we didn’t have to wait long for the disappointment to manifest itself with the New Labour government. The essentially neo-liberal policies continued, with a few of the rougher edges smoothed off.

The final straw for me was the Iraq war, when I decided that I could no longer vote for the Labour party, and a year or so later, I joined the Green party. It wasn’t an easy decision given my background, but I felt that Labour no longer represented my interests and I was becoming increasingly alarmed by climate change.

Since Jeremy Corbyn was elected leader of the Labour party in 2015, it does now look more like its old self, although not nearly as left wing as the right wing media would have you believe. Labour does though offer an alternative to the type of policies that been inflicted on the country for the last forty years.

The Tories of course made a comeback in 2010, and we have suffered a further nine years of their misrule, aided and abetted by first by the Lib Dems and then with the bigots of the DUP. A new nastiness has been a feature of the current Tory government, with the disgraceful demonisation of benefit claimants, and a cruel regime of sanctions on the most vulnerable in our society. The numbers of rough sleepers has rocketed and local authority budgets have been slashed leaving them only as procurers of some, mainly statutory, public services.

This will get even worse if the Tories are re-elected, with the prospect of the NHS being sold off to US corporations, a removal of employment and environmental protections, and sub-standard regulations on the food we eat. It is the only way we will be ‘competitive’ once we leave the EU, if we do.

Wages in the public sector have fallen in real terms by something like £5,000 per year, per person since 2010, when the fetish for austerity was inflicted by the Tories on the nation. A policy that has made matters worse, since the national debt has almost doubled over the last nine years, whilst the Tories talk of ‘sound money’ and ‘economic competence’ but the facts speak for themselves. The country has been screwed, but the wealthy continue to get richer.

And then there is Brexit. There was no clamour for a referendum on leaving the European Union (EU) in the country, only in the Tory party. UKIP never won a Parliamentary election, other than Tory defectors. The Tories latest austerity policies, together with the neo-liberal ethos introduced by Thatcher and continued by New Labour, by and large, led to the feeling that the referendum was seen by many as a golden opportunity to ‘stick it up the establishment,’ and of course this was enough to produce a vote to leave the EU.

The handling of Brexit has been a textbook exercise in rank incompetence, as the in-fighting in the Tory party continues with its obsession with the EU, while the country sees a spike in hate crimes. The Tories don’t care about the country though, only their own fixation with Europe.

So there you have it. An uncaring party which screws the poorest to benefit the richest people. Why people with little or nothing to ‘conserve’ ever vote for them is a complete mystery to me, but even if I was rich, there is no way I could vote for these mendacious bastards. Like 1979 the forthcoming General Election is a water shed election. Do whatever it takes to kick the Tories out on December 12.
Mike Shaughnessy at 10:01
Share