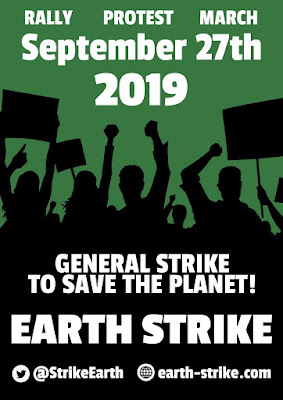 In response to the growing concern of climate issues, several mass protests are scheduled to take place on January 15, 2019. The protesters hope to raise awareness to the ongoing climate crisis and pressure leaders to act on those issues. The demonstrations are organized by a grassroots movement known as Earth Strike.

Earth Strike is an international movement that is dedicated to climate justice by enacting widespread, global change through industry-disrupting actions and other public demonstrations. The movement plans to have the January protests act as the kick-off for the campaign.

Following the initial protests, the Earth Strike movement to continue strategically planning mass demonstrations on days chosen for the most impact and economics disruptions, synchronised across the globe. Frequent wildcat strikes, organized industrial actions, protests, direct actions and climate related mutual aid efforts can all be expected during the Earth Strike campaign. Exact locations of the demonstrations have yet to be determined.

The Earth Strike movement plans to lead up to a general strike that is set to take place worldwide in September 2019. The Earth Strike movement’s demands aim to ensure that the world’s top polluters are held responsible for climate issues and that world leaders will work together to combat climate change in a productive and timely manner.

The recent UN report on climate change left the world rattled by its grim outlook and this new movement is evidence of that growing upset. The Earth Strike movement itself began as a simple call to action on the online forum Reddit.

That simple call to action quickly spread throughout social media. Within mere hours, hundreds of people began working together to organize an international campaign. Within the next few days, those numbers grew into the thousands and still continue to climb. Currently, the movement has National Organisers overseeing National Campaigns in over 15 countries, a number which also continues to grow.

More information about Earth Strike can be found at earth-strike.com or, by following @StrikeEarth on Twitter. 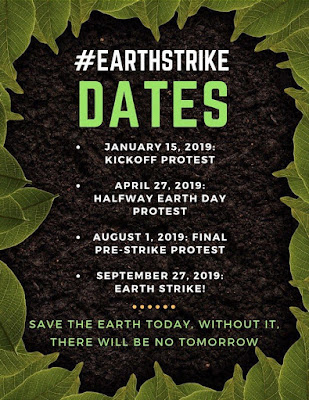 Posted by Mike Shaughnessy at 07:08