Split opens up in Podemos over Catalonia Crisis 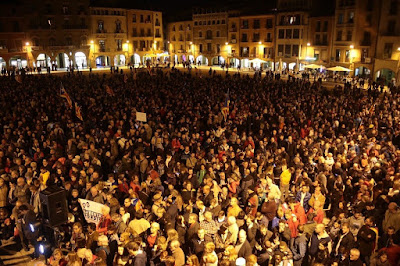 The Spanish left wing political party Podemos, which was formed in 2014 in the aftermath of the 15-M Movement protests against austerity and corruption, is struggling to maintain a unified position on Catalan independence. In the 2015 elections to the Spanish parliament the party received 21% of the vote and became the third largest party in the parliament, with 70 out of 350 seats.

When the Catalan parliament declared independence on 27 October, Pablo Iglesias, leader of Podemos, called the declaration illegal and illegitimate. He said that the pro-independence sector “had an electoral result that allows them to govern, not to declare independence.” At the same time, Iglesias positioned himself against Article 155, saying that it would “do a lot of damage to Catalonia and to Spain.”

Iglesias later tweeted “We are against repression and for a negotiated referendum [which the Madrid government refused to Catalonia] but the declaration of independence is illegitimate and favours the strategy of the PP [People's Party, headed by Spanish premier Mariano Rajoy].”

Essentially, national Podemos’ position is that direct rule of Catalonia from Madrid be ended, Catalan leaders should be released from prison and charges against them dropped and a legitimate referendum on independence be held. Podemos doesn’t want to belong to any coalition standing on an independence ticket at the Catalan regional election on December 21, which Madrid insists must be held.

But this middle of the road response doesn’t appear to be holding though as tensions escalate and Catalonia moves towards a possible independence. Podemos is really an alliance of many political parties and groupings in Spain, and some component members of the alliance are now breaking ranks.

Here is an extract from the statement:

“On 27 October, in fulfilment of the mandate of the referendum of 1 October in which despite police repression more than two million people participated, the Catalan Parliament proclaimed the Catalan Republic. In a Spain with a monarchy that is a direct successor of the dictator Franco, a Republic that opens up a constituent process is without doubt a proposal that breaks with the 1978 regime, with its political consensus and with a constitutional order that serves the elites.”

“This is the time to defend the possibility of a democratic solution to the diktats of the State. It is time to (re)start the patient construction of a project that goes beyond the 1978 regime and is capable of building fraternal relations between the different peoples of the Spanish State. The elites have proven incapable of solving the problems of the Spanish State; today more than ever, it is urgent to recover the leading role of politics for those below.”

The leader of the Catalan grouping within Podemos is also at odds with the national party. ‘Podemos sources’ cited by OK Diario state: "Albano Dante Fachin, spokeperson of Podemos Catalonia has decided that he is not the general secretary of Podemos Catalonia but a politician in Catalonia with his own agenda."

In his press appearance on November 1 Fachín said that Podemos Catalonia would talk to all parties and movements in Catalonia before deciding its orientation to the December 21 elections. This goes against the line decided by Podemos at the level of the Spanish state, which is to support the campaign to be run by Catalunya en Comú ("the commons") according to the slogan "neither 155 nor UDI".

Fachin says that the membership consultation imposed from Podemos at the state level is not acceptable in democratic terms, and "kills the spirit of October 1". He said "Pablo Iglesias has intervened in Podem Catalunya in the same way as Mariano Rajoy has intervened in Catalonia."

Fachin has denounced "a war" by Spanish state leader Iglesias to remove him as general secretary. Fachin states that the attack, which consists in having various Podemos branches in Catalonia demand a special congress to vote on his position, is unconstitutional because Podemos statutes says that such a call cannot be made before 18 months have passed since the elections of the general secretary (in Fachin´s case, in January 2018, given that he was elected in July 2016).

Fachín has told radio RAC1 that his "future is not in another party. What we will try is to build is a citizens' response above and beyond parties."

A legitimate referendum on Catalan independence seems to be the only way to fairly resolve this crisis, but the Spanish government refuses to allow this to happen. In the circumstances, who can blame the pro-independence Catalans from using the enforced December election as an opportunity to stand on an independence ticket? Opinion polls are now showing them on course to win a majority in the Catalan parliament, just like they did last time.

Posted by Mike Shaughnessy at 07:22