Theresa May is the most Incompetent Prime Minister of my Lifetime 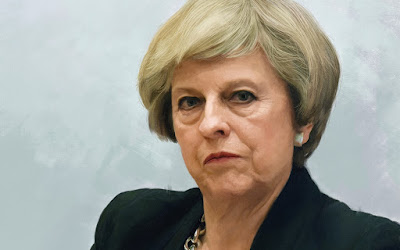 I was born in 1962 when the Tory prime minister was Harold Macmillan. He is famous for his slogan, ‘most of our people have never had it so good’, and in many ways he was right. The economy was booming, jobs easy to obtain and a welfare state. Macmillan’s government built hundreds of thousands of council houses, and relatively, times were good. He was brought down in1963 over the Profumo affair, which was no fault of his own, so overall he scores quite well.

Macmillan was removed in the infamous ‘night of the long knives’ by the ‘men in grey suits’, (the Tory party establishment) and replaced with the tweed jacketed toff, Sir Alec Douglas Home. Labour managed to capitalise on the Profumo affair and paint Home as a toff in an age when British deference to authority largely died a death. Home lost to Labour in 1964, but confounded expectations and Labour’s Harold Wilson only won a narrow majority in Parliament. Home was short lived but didn’t really do any damage.

Wilson went back to the country in 1966 and won a 100 seat majority, but unexpectedly lost the 1970 election, which he chose to call earlier than necessary. But Wilson was to make a comeback, after the Tory prime minister, Ted Heath’s reign ended in 1974. Amid a national mine workers strike, leading to power cuts, and his imposition of the ‘three day week’ to conserve energy, and the TV going off at 10pm. Heath called a who ‘runs the country’ election in 1974, and lost.

So Harold Wilson was back, with a minority Labour government. He called a second election later in the year and won a small majority. Wilson retired in 1976 after winning four general elections and James Callaghan became prime minister. Wilson was a shrewd operator and kept the competing personalities in his Cabinet united. He also was a master of prevarication when it came to keeping the UK out of the Vietnam war (which Heath continued).

Callaghan was soon running a minority government, propped up by the Lib Lab pact with the Liberal party, faced with the oil crisis, industrial unrest and high inflation he had his hands full but with skill hung on until 1979, when Margaret Thatcher won for the Tories. Although Callaghan had a difficult time as prime minister, nobody ever thought of him as incompetent.

Margaret Thatcher brought huge change to the country, got involved in an imperialist war with Argentina, broke the power of the unions and started privatising public services. I opposed everything Thatcher did, but I never thought of her as incompetent. She won three general elections in a row.

Finally brought down by her own party in 1990, Thatcher was succeeded by John Major who went on to win a surprise election victory in 1992. Major was tormented by his Eurosceptic MPs, who he termed ‘the bastards,’ called a leadership election and won, but his authority was damaged. The humiliation of having to withdraw from the European Monetary System when the pound went into free fall, and beset by sleaze, financial and sexual, lost the 1997 election by a landslide. He was prime minister for seven years though, and did have that 1992 election win to his credit.

Labour’s Tony Blair then won two further elections, but was damaged by getting involved in US led wars in Afghanistan and Iraq. He carried on the work of the Tories in privatising public services and reducing taxes for the rich, but his three general election triumphs in a row was a record for Labour. Gordon Brown followed when Blair stood down in 2007, and carried on in much way as Blair, but without the charisma. His finest moment was during the 2008 financial crisis, when he was the only world leader to have a plan to stabilise the world economy, which involved nationalising the banks. He lost to David Cameron’s Tories in the 2010 election.

Cameron didn’t have a majority in Parliament, so relied on a coalition with the Lib Dems, he introduced austerity measures and took an economy that was in fragile recovery and drove it into a ditch. He was forced by his Eurosceptic MPs into promising a referendum on EU membership, which he had to grant, then went onto surprise everyone, including himself no doubt, by winning a majority in 2015. He lost the referendum in 2016, and promptly resigned. A very poor prime minister, but he did at least win one and a half general elections.

So we come to the present incumbent, Theresa May. May supported remaining in the EU, but was pretty quiet about it, positioning for a future tilt at the leadership. She was lucky that all her opponents in the leadership election, one by one, dropped out, and she was left as the only candidate, so didn’t even win an internal election to become leader (and prime minister). She became a convert to Euroscepticism and took a hard line on Brexit. Miles ahead in the opinion polls, facing a deeply divided Labour opposition with an unpopular leader, she went for what she probably thought would be an easy win, and called an election in 2017, and lost her majority in Parliament. A shameful bribe to the Northern Irish DUP is the only thing keeps her in office today.

For someone who has been a politician for as long as May has, it is incredible how bad she is at politics. The disastrous speech to re-launch her premiership at last week’s Tory party conference was a metaphor for her leadership generally. An embarrassing stunt of being handed a P45, and the voice loss and continual coughing, against a backdrop of the stage falling apart, all seemed to sum up her term as prime minister.

May is surely the most hapless, incompetent prime minister we have had in the last fifty odd years. She has never won even an internal party election, let alone a general election, is beset with infighting in her party and her Cabinet, and with a run on the pound and the economy teetering on the edge of stagnation. She is too politically weak to do anything beyond survive, until her party ditches her, in the not too distant future it seems.

Unfortunately for the country, this is the person in charge of our most critical international negotiations since the end of the second world war, and it’s a complete shambles. God help us.
Posted by Mike Shaughnessy at 10:08