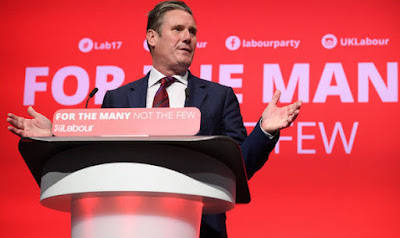 When will the Labour Party come clean on its Brexit policy? The ongoing fudge on the issue, which admittedly served them well at this year’s general election, is becoming rather tedious now. You will get differently nuanced views from Keir Starmer, shadow Brexit spokesperson, John McDonald, shadow chancellor and the leader Jeremy Corbyn.

Labour had a golden opportunity, nay a duty, to state unambiguously, what their Brexit policy is, at their party conference this week in Brighton. In what was reminiscent of the new Labour years, conference was denied an opportunity to take a stance, one way or the other, on key issues like membership of the single market and customs union. A solid, unequivocal position could have taken, but no, the only difference with the Blair years was that the dictatorship was of the proletariat, on the face of it anyway. There is more to democracy than numbers.

The leadership of the Labour Party was desperate to close down debate on the issue, and succeeded by launching a campaign to members through its Momentum grouping, against having a debate and vote on this crucial issue for the country. Momentum organised members into voting for debates on other issues instead.

There was a fairly short and vague debate, leading to a statement being put out by the party National Executive Committee (NEC), which is controlled by the leadership, but no vote at conference. To say that the statement is vapid, is probably an understatement, but it was the best word I could come up with having seen what the NEC cooked up, according to the Huffington Post.

The statement is mainly a criticism of the Tory government’s disastrous handling of the negotiations so far, which is fair enough, as they have made a right mess of things, but Labour has been no clearer than the Tories on its position, and wilfully refuses to do so.

The statement mentions worker’s rights, in a nod to the unions, and confirms a transitional period of Brexit would be sought. And says Labour will not scapegoat immigrants and would confirm existing EU immigrants can stay in the country, on the same basis they have now.

We knew all of this, as it has been stated before.

In a classic piece of non-speak, the statement declares:

Labour is clear that we need a tariff and impediment- free trading relationship with the European Union. Labour’s priority is an outcome that puts jobs, living standards and the economy first. The precise institutional form of the new trading and customs relationship needs to be determined by negotiation. Labour will not support any future arrangement that sees the introduction of a hard border, or which restricts freedom of movement between Ireland and the UK.

In short, have your cake and eat it, just like the Tories are promising. But this is not on offer from the EU, and likely never will be. Labour surely knows this.

It is plainly apparent that this is an exercise in party management for Labour, where the vast majority of its MPs want to either remain in the European Union (EU) or have the softest of Brexits. Far be it from me to support calls from the Labour First and Progress groupings within the Labour Party, but most of Labour’s members and voters want the same outcome.

There is mention in the statement of respecting the referendum result, but the question on the referendum ballot was, ‘do you want to remain in or leave the EU?' By leaving the EU and joining the European Free Trade Area, which we were a member of before we joined the EU, would fulfil that vote. The question wasn’t do you want to leave the customs union or do you want to bar foreigners from living in the UK, so why all of this pious respecting of a vague, and closely run result? Who will represent the 16 million people who wanted to remain in the EU? Not Labour it seems.

It is probably the case that the Labour leadership just wants a display of unity at its conference, another throwback to the new Labour years, and sit back and watch the Tories tear themselves apart over Brexit at their conference next week. But I have criticised the Tories for putting the party’s good ahead of the good of the country, so to be even handed, I have to accuse Labour of the same thing.


Labour’s approach to Brexit is not much different from the Tories.

Posted by Mike Shaughnessy at 13:53